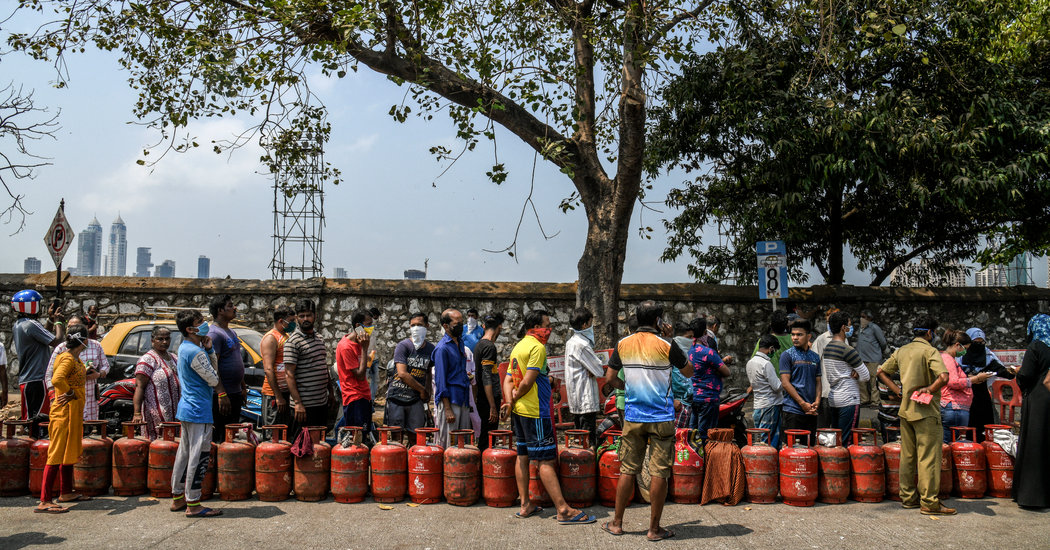 The beginning of the world’s largest coronavirus lockdown — affecting one-fifth of the global population — started with most Indians appearing to follow the rules and stay home. But confusion ensued about which services could be left open.

The measures imposed were sweeping and varied. In one state, police officers stopped motorists and demanded to know why they were outside. Rule-breakers were threatened with public shaming and even being shot.

And anxiety is running high: Shelves in food stores and pharmacies have been emptied. Many Indians live hand to mouth, and their families will struggle to eat. In some places, doctors have been run out of their homes, shunned as carriers of the virus.

Here are the latest updates and maps of the outbreak. We’ve also compiled a daily tracker that shows the virus’s trajectories by country and state.

It’s a problem that has moved from country to country and continent to continent with the pandemic.

Now, hundreds of overwhelmed health care workers in the U.S. are describing chaotic hospital scenes and fears for their own safety. They’re adding their stories to a shared online document set up by a nurse in New Jersey.

The nurse, Sonja Schwartzbach, said she was fed up with the lack of attention to hospital conditions that were “far worse” than most people realized

She decided to share some of the private document with a Times reporter. “I couldn’t stay quiet about it any longer,” she said.

Details: The nurses say that they are scared to go to work. They lack protective equipment, especially masks — some have been told to reuse theirs for days. Others cover their mouths with bandannas or coffee filters.

Europe: Health workers across the Continent, especially in Spain, have been knocked out of action in droves by the virus, with many citing a lack of proper protective gear.

How to help: If you have masks, rubber gloves or goggles, donate them to a hospital.

‘What I learned when my husband got sick’

In a first-person essay, an editor for The Times in New York, Jessica Lustig, describes life with her family since her husband tested positive for the coronavirus.

She writes: “It’s as if we are in a time warp, in which we have accelerated at 1½ time speed, while everyone around us remains in the present — already the past to us — and they, blissfully, unconsciously, go about their ordinary lives, experiencing the growing news, the more urgent advisories and directives, as a vast communal experience, sharing posts and memes about cabin fever, about home-schooling, about social distancing, about how hard it all is, while we’re living in our makeshift sick ward, living in what will soon be the present for more and more of them.”

Jamal Khashoggi: Turkish officials announced the indictment of 20 Saudi nationals on charges of murder and incitement to murder in the killing of the dissident journalist, ending Turkey’s investigation. No trial is expected because none of the men are in the country.

South Korea: The police identified Cho Joo-bin, 24, as the suspect accused of blackmailing dozens of young women, including at least 16 minors, into making sexually explicit video clips that the police say he sold online. Since his arrest last week, more than 2.6 million people have supported an online petition asking the government to break with customary anonymity for suspects.

Snapshot: Above, the South African artist Sethembile Msezane inside her art installation at the first-ever Stellenbosch Triennale in South Africa. Traditionally known as a redoubt of the Afrikaner elite, Stellenbosch is an unexpected place for experimental, pan-Africanist art.

What we’re reading: The Twitter feed of the National Cowboy and Western Heritage Museum in Oklahoma City. “While the museum is closed during the coronavirus pandemic, its head of security, Tim Send, has also been running its social media accounts,” says Chris Stanford, on the Briefings team. “A self-professed Twitter newbie, he provides a virtual tour of the exhibits, charmingly punctuated by dad jokes.”

Sam Sifton, the founding editor of NYT Cooking and a former culture editor, has been named assistant managing editor to oversee The Times’s cultural and lifestyles coverage, a role that has new urgency in a time of pandemic.

Many of us are “staying home these days, some working and learning remotely, others out of work, many quietly freaking out alongside loved ones, everyone wondering what exactly to do right now that’s not panicky or scared but joyful, nourishing, fun,” Sam writes. “Our reporters and critics have a lot of ideas about that, and we’ll bring you more every day.”

Here are some of the ideas he’s pulling together from across the newsroom.

What is it about New York City that made the virus surge here?

According to the experts, the single biggest factor is simply the density of the city. Twenty-eight thousand people live in every square mile of New York.

New York has been testing a lot of people. Are the big numbers just a product of that?

We looked into it. New York has conducted more tests than any other state. However, even after you account for that, the number of cases in New York is much higher.

If you just compare the percentage of tests that have come back positive, it’s about 25 percent in New York, and in California it’s about 5 percent. That doesn’t necessarily mean that five times as many people in New York have it, but it is a sign that the virus is probably more widespread in our community than in California.

What would explain the difference?

What the experts think is that this virus was circulating in the city for much longer than we thought, and it spread before we put in place these social-distancing measures. We are starting to see the ramifications of that now, days and weeks after the virus spread, because it takes time for symptoms to show up.

I think the most important lesson for the general public is to take this seriously, because the number of cases can escalate extremely quickly, and it will catch you off guard.

P.S.
• We’re listening to “The Daily.” Our latest episode is about President Trump’s response to the coronavirus pandemic.
• Here’s our Mini Crossword, and a clue: Capital of Vietnam (five letters). You can find all our puzzles here.
• Times Opinion columnists and writers have begun going live on Twitter every weekday to chat with viewers. Watch Frank Bruni’s Wednesday session, or join Nick Kristof for Thursday’s, at 1 p.m. Eastern (4 a.m. Friday in Sydney).