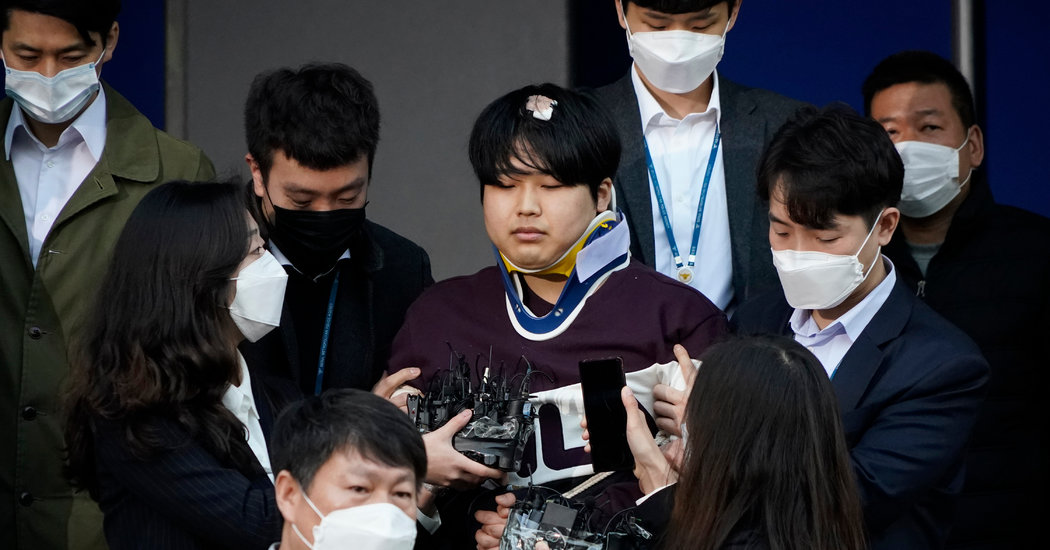 SEOUL, South Korea — The South Korean police on Wednesday asked prosecutors to indict a 24-year-old man on charges he blackmailed dozens of young women, including at least 16 minors, into making sexually explicit video clips that he sold online through encrypted chat rooms.

The case has galvanized nationwide attention to what women’s rights advocates have called a growing problem in South Korea: a network of clandestine online chat rooms that lure young women with promises of high-paying jobs online and then exploit them sexually. Some estimates in the local news media say that up to 300,000 paying customers use these online chat rooms, in which operators go so far as to provide tailor-made footage for individual customers that often include extremely dehumanizing sex scenes, the police say.

The man in the latest case, Cho Joo-bin, has shared such illegal video footage since late 2018 through members-only chat rooms he operated on Telegram, an encrypted messaging service popular in South Korea, the police said.

Mr. Cho, who went by his online alias “The Doc,” is the most infamous criminal suspect in the authorities’ efforts to clamp down on the booming trade in such sexually explicit videos.

As he was escorted from a Seoul police station Wednesday morning on his way to the prosecutor’s office, Mr. Cho said, “Thank you for stopping my life as a devil that I could not stop.” But he did not respond when journalists asked him to comment on various criminal charges he faced.

The police did not release Mr. Cho’s name or an image of him until Wednesday. South Korea usually protects criminal suspects’ identities to respect their rights and that of their relatives. But it makes exceptions when the accused are public figures or are charged with particularly heinous crimes.

Since Mr. Cho’s arrest last week, more than 2.6 million South Koreans have supported an online petition to President Moon Jae-in asking the government to reveal his name and face. Another petition, which asked the government to identify all customers of online chat rooms operated by Mr. Cho and others like him, has drawn nearly 1.9 million supporters.

On Wednesday, as it handed Mr. Cho over to prosecutors, the National Police Agency said it was revealing his identity because of what it called his “vicious and repetitive criminal method” in keeping 74 women, including 16 minors, in sexual “slavery.”

In the past week, South Koreans have expressed increasing outrage as details of Mr. Cho’s alleged criminal activities emerged in local media.

Mr. Cho attracted female victims with fake job offers online and then lured them into making sexually explicit video clips, promising them a big payout, the police said. Once he got hold of those compromising images, he used them as a blackmailing tool, threatening to release them online or to their friends and relatives unless the women supplied increasingly dehumanizing and even violent footage.

In the videos, some of the victims had the word “slave” marked on their bodies, local news media reported.

In recent years, the South Korean police have been cracking down on pornographic file-sharing websites as part of international efforts to fight child pornography. As they did so, they said they soon realized that much of the illegal trade in pornography was migrating to online chat rooms on social media messaging services like Telegram.

Telegram has become popular among many South Koreans who believe that such encrypted messaging apps help protect their freedom of speech. But the widening police investigation showed that such apps have also become important vehicles for the sex trade.

But “The Doc” had proven particularly elusive as he pursued his lucrative trade, luring customers with “trailer” clips on Telegram chat rooms and charging them more when they demanded more sexually explicit or perverted video clips, investigators said.

When the police finally caught him last week, “The Doc” turned out to be Mr. Cho, an ordinary looking graduate of a two-year vocational college in Incheon, west of Seoul, who once served as his campus newspaper’s editor in chief. Mr. Cho has lived a double life, volunteering for a charity that aids handicapped or poor people, according to the local news media.

The police also apprehended a dozen accomplices, including young men in their 20s who were serving in government agencies as part of their mandatory military duty. Investigators were also looking for another anonymous chat room operator known as “GodGod.”

On Monday, Mr. Moon promised a full investigation and stern punishment. He urged the police to investigate the customers of the chat rooms as well. Mr. Cho and his customers have often used cryptocurrency payments to throw the police off their trail, investigators said.

In 2017, South Korea revised laws to strengthen punishment for spycam pornography — the use of tiny, hidden cameras to film female victims, often in public bathrooms. Lee Jung-ok, the minister of gender equality and family, said this week that the government was working to further increase punishment for sexual crimes online.