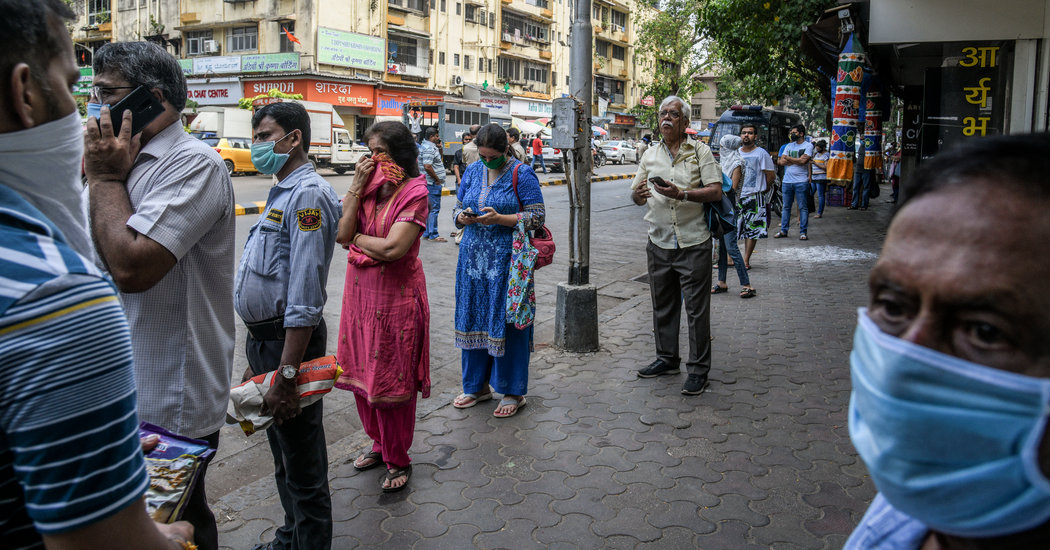 NEW DELHI — In one state, police officers have staked out roads and highways, stopping any passing motorists and demanding to know why they were outside their homes. In another, doctors have been run out of their homes, shunned as carriers of the coronavirus.

Across India, crowds swarmed into food stores and cleaned out the shelves. At a fancy market in New Delhi, one man stuffed his Mercedes with groceries on Wednesday afternoon and then jumped behind the wheel and zoomed off — wearing blue rubber dishwashing gloves and a clear plastic face mask that looked like it fit with a snorkel.

This is Day 1 of how India is coping with the world’s biggest coronavirus lockdown, 1.3 billion people — nearly a fifth of humanity — ordered to stay inside unless vitally necessary.

India has reported relatively few coronavirus cases — fewer than 600 so far — but with the population density so high and the public health system so weak, Prime Minister Narendra Modi has imposed stringent measures to keep India from sliding into the disaster that the United States, Italy and other countries face.

On Tuesday night, Mr. Modi ordered more than a billion people to stay indoors. And on Wednesday, Indians, from the snowbound valleys in the Himalayas to tropical islands in the Andaman Sea, mostly seemed to be following the rules — though the price for some will prove high.

Many Indians live on a very short and tentative cash flow. Rickshaw drivers, for example, buy food for their families with the money they make that day. Rickshaws have been banned from the roads, and many drivers don’t know how they are going to survive.

Many Indians reported difficulties in getting food. According to the official lockdown rules, police officers are not supposed to shut down food shops or factories related to essential commodity production. But these rules have been interpreted with differing degrees of harshness. Many essential food sources have been closed and farmers are staying home as well.

One chief minister, in Telangana State, in the center of the country, threatened to issue “shoot on sight” orders if people did not take the lockdown seriously.

In the Andamans, Jagadishan, a taxi driver, has been cooped up in his house in Port Blair, longing to “walk past the sea and smell fresh sea air.”

“All shops are shut, not even groceries or chemists are open,” he said, which should not be the case, according to the government’s rules. “The uncertainty is killing me.”

Mr. Modi said the lockdown would last 21 days. Some health experts think that will not be enough and that Mr. Modi will extend it. But in Kolkata, a large city in eastern India that is a stronghold of the political opposition to Mr. Modi, many people were hoping the lockdown would wrap up even quicker.

“People are hoping that India will overcome this disease in 14 days,” said Chandrasekhar Bhattacharya, a newspaper journalist in the city.

India is a crowded place, and Mr. Modi is basically trying to throw normally bustling life into a deep freeze. The lockdown includes schools, offices, factories, parks, temples, railways, even the airspace. The long roads of major cities remain deserted, and to implement social distancing in a place where people are used to squeezing together, businesses and the authorities are devising their own solutions.

In the city of Meerut, the police began shaming people caught evading the lockdown, forcing them to hold up signs saying they did not care about protecting society and then posting photos of them.

At Mother Dairy, a national milk cooperative, shopkeepers chalked out circles and squares on the pavement in front of their stores to indicate where people should wait. The intent was to keep people spaced apart; it seemed to be working, even if it looked like a hopscotch game.

In Veergaon, a farming community in central Maharashtra State, a few farmers were still tilling the fields. But many stayed indoors, in small cramped houses with sheet-iron roofs.

“They fear the disease,” said Kapil Wagarhande, one of the villagers.

On Tuesday night, Mr. Modi spoke eloquently and forcefully about the dangers of social interaction and how Indians needed to make big sacrifices right now, especially the poor. Mr. Modi remains widely popular in India, and in many quarters, what he says goes.

“Everybody appreciates the steps taken by Modi Ji,” said Kailash Dhoot, a textile trader in Mr. Modi’s home state of Gujarat, using the formal way of referring to him. “Of course people are facing problems like how to spend the whole day. What do you do? That problem is there but people are aware of the issues.”

But rumors and misinformation are leading to closures and harassment that the government clearly didn’t intend.

In a video message, Sandeep Nangia, president of a pharmacists’ association in New Delhi, said the police were “raining sticks” on pharmacists for trying to do their jobs.

Doctors and airline employees have reported landlords forcibly evicting them from their homes, calling them “dirty.”

Amrita Saha, an employee at IndiGo, India’s biggest airline, said people in her neighborhood were spreading rumors that she had the coronavirus and harassing her mother, who lives with her in Kolkata.

“She cannot go to the market to buy groceries, because people are refusing her, saying, ‘Your daughter has the corona and you might also have it,’” Ms. Saha said in a recent video, nearly in tears.

An association of doctors in New Delhi wrote to India’s home minister, Amit Shah, on Tuesday urging the government to protect medical personnel from being thrown out of their homes.

“Many doctors are now stranded on the roads with all their luggage,” the letter read.