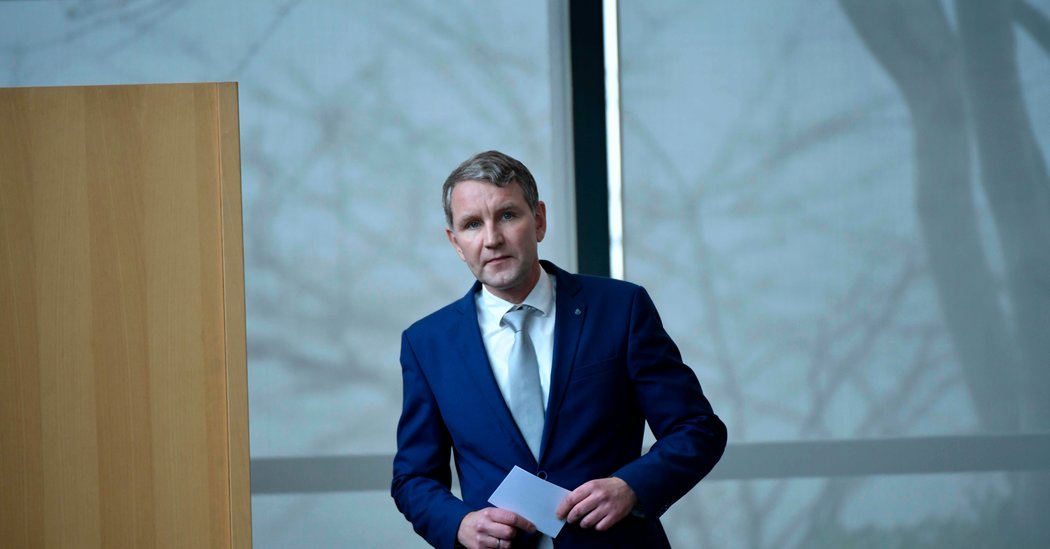 “They’ve built themselves a parallel structure, and the federal board wants it to draw down that activity to zero,” Bastian Behrens, a spokesman for the national Alternative for Germany party, said on Friday.

Mr. Höcke, perhaps The Wing’s most visible leader, is a history teacher turned far-right ideologue with links to neo-Nazi circles. He is the author of a book demanding far-reaching changes to Germany’s postwar liberal democratic order, to be achieved through what he terms “temperate brutality.”

“A few small corrections and little reforms won’t do, but German absolutism will be the guarantee that we will tackle this thoroughly and fundamentally,” he writes in one passage.

Mr. Kalbitz, the head of the party in the state of Brandenburg and another senior figure in The Wing, has previously acknowledged having belonged to groups close to neo-Nazis. Recently, however, his name was found on a membership list of the neo-Nazi group Heimattreue Deutsche Jugend as late as 2007, according to the German news media, a link that under the party’s rule book should have barred him from joining Alternative for Germany.

Mr. Behrens, the spokesman for the party, acknowledged the charges and said Mr. Kalbitz would have to take steps to clear his name, implying that the party had not made a decision about Mr. Kalbitz’s fate.

“We can’t make any sanctions just because there were two press reports,” he said. Mr. Kalbitz has denounced the reports as false.

Professor Funke said that while The Wing was under pressure now, its apparent dissolution was likely to be followed by propagation of its platform in the wider party.

“The power struggle is far from over, and at this point they are merely shadowboxing,” he said.