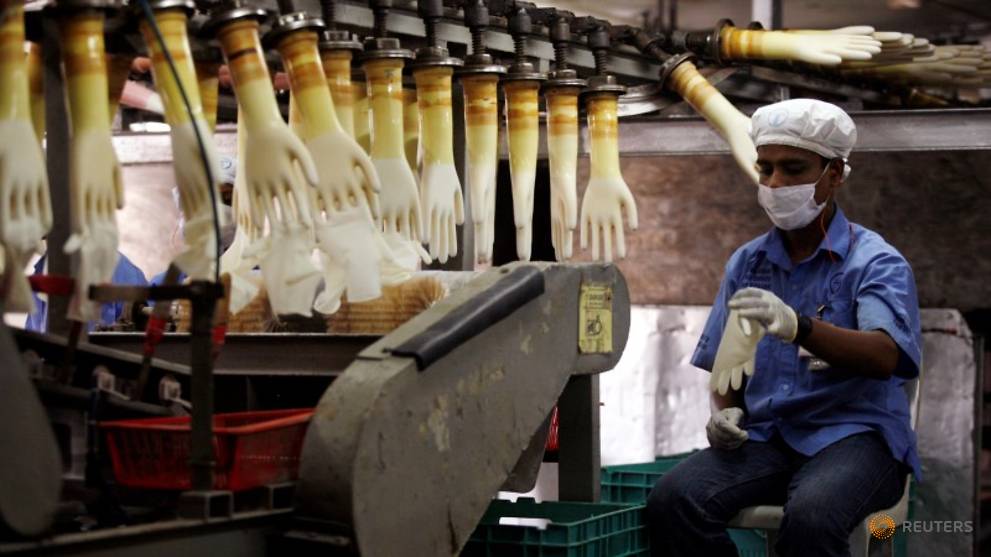 KUALA LUMPUR: The rubber glove manufacturers association of Malaysia, the world’s largest maker of medical gloves, on Wednesday (Mar 25) warned of a chronic shortage of gloves after a surge in demand from hospitals swamped with coronavirus patients.

The Malaysian Rubber Gloves Manufacturers Association (MARGMA) also said production would be cut because of a virtual one-month lockdown in the country, during which they are allowed to operate with only 50 per cent staff.

“Production costs will increase tremendously by at least 25 to 30 per cent … Fortunately, buyers are aware of this cost factor and have come forward to assist and cooperate to bear the cost as well,” it said in a statement.

Disposable rubber gloves are indispensable in the global fight against the coronavirus, yet a month’s lockdown in stricken Malaysia where three of every five gloves are made has upended the supply chain and threatens to hamstring hospitals worldwide.

The world’s biggest maker of medical gloves by volume, Top Glove Corp, has the capacity to make 200 million gloves a day, but a supplier shutdown has left it with only two weeks’ worth of boxes to ship them in, its founder told Reuters.

“We can’t get our gloves to hospitals without cartons,” executive chairman Lim Wee Chai said in an interview. “Hospitals need our gloves. We can’t just supply 50 per cent of their requirement.”

The virus, which emerged in China at the end of last year, has left Malaysia with the highest number of infections in Southeast Asia, with nearly 1,800 cases, with 19 deaths. To halt transmission, the government has ordered people to stay home from Mar 18 to Apr 14.

MARGMA said it was lobbying “almost every hour” to return the industry to full strength to minimise risk to the global fight.

READ: Most COVID-19-related deaths in Malaysia due to late treatment: Health director

Dr Celine Gounder, an infectious diseases specialist at the New York University School of Medicine, said she was using up to six times as many gloves as normal each day due to the number of patients with COVID-19, the illness caused by the virus.

“If we get to the point where there is a shortage of gloves, that’s going to be a huge problem because then we cannot draw blood safely, we cannot do many medical procedures safely.”

With glove supplies dwindling, the US Food and Drug Administration on its website this month said gloves could be used beyond their designated shelf life. On Tuesday, the United States lifted a ban on imports from Malaysian glove maker WRP Asia Pacific who it had previously been accused of using forced labour.

Britain’s Department of Health & Social Care has urged Malaysian authorities to prioritise the production and shipment of gloves that are of “utmost criticality for fighting COVID-19,” showed a letter dated Mar 20 to glove maker Supermax Corp and shared with Reuters.

MARGMA is considering rationing due to the “extremely high demand,” its president Denis Low said. “You can produce as many gloves as you can but then there’s nothing to pack them into.”

Under normal circumstances, Top Glove can meet less than 40 per cent of its own packaging needs. For the remainder, it said just 23 per cent of suppliers have gained approval to operate at half strength.

“We are lobbying almost every hour, we are putting in a lot of letters to the ministry,” said Low. “We are lobbying hard for the chemical suppliers and we want to ensure that the printers are also being given approval and any other supporting services, even transportation.”

Malaysia’s Ministry of International Trade and Industry on Tuesday said it had received masses of applications to operate through the lockdown, and that it was seeking cooperation from industries to give way to those producing essential goods.

Developed economies are home to only a fifth of the world’s population yet account for nearly 70 per cent medical glove demand due to stringent medical standards. At 150, US glove consumption per-capita is 20 times that of China, latest MARGMA data showed.

MARGMA expects demand to jump 16 per cent to 345 billion gloves this year, with Malaysia’s market share rising two percentage points to 65 per cent. Thailand usually follows at about 18 per cent and China at 9 per cent.

Top Glove said orders have doubled since February and it sees sales rising by a fifth in the next six months. Its stock, with a market value of about US$3.5 billion, has risen by a third this year versus a fall of 16per cent in the wider market.

“We are fortunate enough to be in essential goods,” said Lim. “These few months and at least the next six months will be an all-time high in terms of sales volume, revenue and profit.”

With more than 80 per cent of its 44 factories worldwide automated, Top Glove itself is less impacted by the lockdown than its more labour-intensive domestic suppliers. Packaging woes aside, however, ramping up production could turn under-supply into over-supply when the coronavirus outbreak finally subsides.

“This outbreak will create awareness and make humankind healthier,” said Lim. “People will pay more attention, they will invest more, they will buy more so demand will be more.”