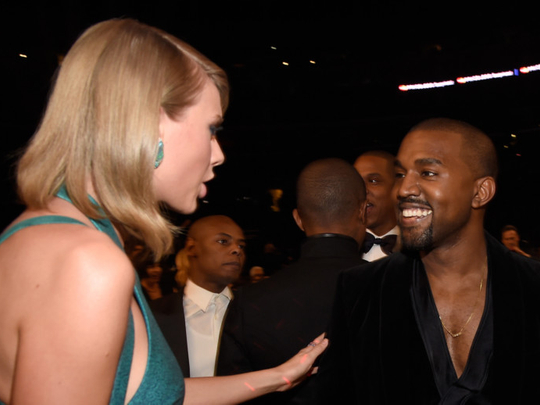 A full version of the infamous 2016 phone call between Swift and West went viral on social media recently, prompting Kardashian-West to like a tweet suggesting that the video ‘showed nothing new’.

“Instead of answering those who are asking how I feel about the video footage that leaked, proving that I was telling the truth the whole time about *that call* (you know, the one that was illegally recorded, that somebody edited and manipulated in order to frame me and put me, my family and fans through hell for 4 years)…”

At the end of her post, Swift switched gears and told her fans to “SWIPE UP to see what really matters.”

The link led to a fund-raising website, Feeding America, which helps provide meals to food banks. She added that she has also been donating to the World Health Organisation (WHO).

Kardashian-West responded to Swift on Twitter, claiming she felt “really embarrassed and mortified to be doing it right now.”

“[Taylor Swift] has chosen to reignite an old exchange — that at this point in time feels very self-serving given the suffering millions of real victims are facing right now,” she tweeted. “I feel I’m left without a choice but to respond because she is actually lying.”

Over a series of 10 tweets, Kardashian-West said her only issue had been that “Taylor lied through her publicist who stated that ‘Kanye never called to ask for permission…’ They clearly spoke so I let you all see that. Nobody ever denied the word ‘[expletive]’ was used without her permission.”

“The lie was never about the word [expletive], It was always whether there was a call or not and the tone of the conversation.”

She also claimed she never edited the footage and added that West had ‘every right’ to document this musical journey, likening it to Swift’s recent Netflix documentary, ‘Americana’.

“This will be the last time I speak on this because honestly, nobody cares,” wrote Kardashian-West. “Sorry to bore you all with this. I know you are all dealing with more serious and important matters.”

The lyrics in question in West’s 2016 track ‘Famous’ are: ‘I feel like me and Taylor might still have sex/Why? I made that [expletive] famous.’