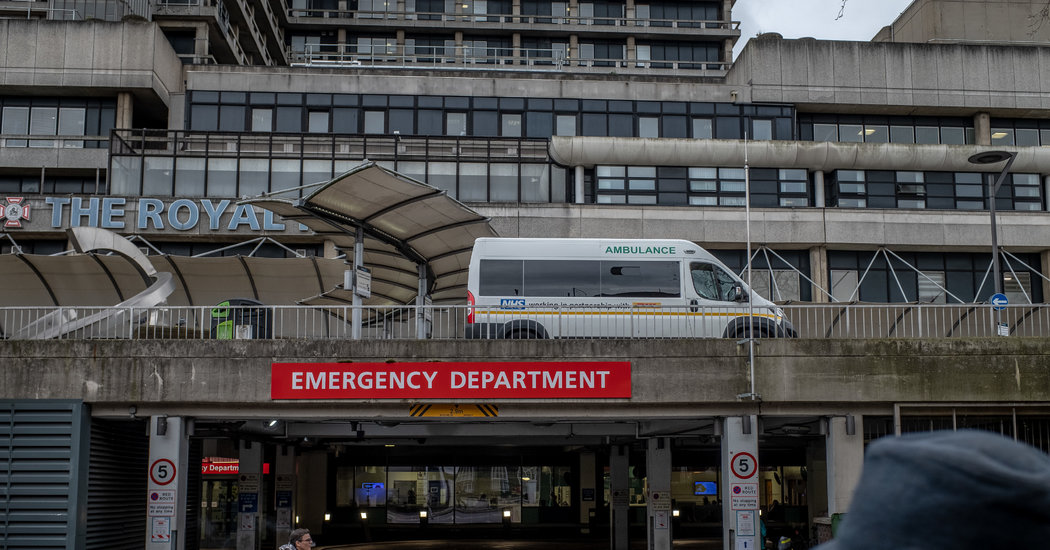 LONDON — Within hours of the British government announcing that its National Health Service could no longer dedicate the resources to test every suspected case of coronavirus, a doctor at a private clinic in London began procuring supplies of screening kits that he has since been selling for three times what they cost.

“I know that a lot of people are slagging me off for racketeering,” said the doctor, Mark Ali, using a British term to refer to the insults he had received. Within a week, he had taken in 2.6 million pounds in orders, about $3 million.

“On the contrary,” he said in defense of his activities. “I met a national need at the point when the government was doing little.”

Widespread testing for the coronavirus has since emerged as a central pillar of the British government’s strategy to combat the outbreak. But private clinics, labs and go-between distributors have jumped at the opportunity to trade in testing services, snapping up supplies of diagnostic kits that the government badly needs.

Adding to the concerns, some of the kits have been sold at a steep markup, bringing accusations of profiteering. Many are also unreliable, producing false negatives and false positives. Some are outright fakes.

Britain, like the United States, changed tactics after its leaders came under fierce criticism for initially failing to test widely enough. It now aims to test 25,000 hospital patients a day, and Prime Minister Boris Johnson announced on Monday that the government would buy “millions of testing kits that will enable us to turn the tide on this invisible killer.”

Public health officials have said that they are in discussions with nearly two dozen private firms about coronavirus testing systems and that they had signed a deal worth about $1.2 million with one laboratory to provide the kits.

While there is little doubt that the government will reach its goal, experts say the authorities should not have to compete with private companies for testing kits or for other important items at this crucial moment.

“A scarce, vital resource like testing must be thought of as a public resource, no matter whether it’s produced and provided by the government or the private sector,” said Dr. Jonathan Quick of the Duke Global Health Institute in the United States, who is a former director of medicine policy at the World Health Organization. “Not to do so further endangers everyone,” he added.

That has not stopped some companies from trying to cash in, which is not strictly speaking illegal but can carry a stigma.

Consider AlphaBioLabs, a small private service in northwestern England that was, until now, probably best known for carrying out DNA tests on “The Jeremy Kyle Show,” a tabloid-style daytime TV program in Britain that was canceled last year.

In a statement published on March 20, the lab said it had been “shocked and saddened to receive so many desperate inquiries from front-line organizations, such as the N.H.S., needing the Covid-19 screening test.” The company pledged to sell its “initial stock” to the National Health Service at cost, but did not say how many testing kits that included.

Three days earlier, AlphaBioLabs — which has since stopped marketing the test to the public — had announced that it would be selling its kit for £125. One newspaper hailed the news with the headline: “Brit lab’s new finger-prick test can ‘detect virus in 15 minutes.’”

But the British lab did not create the test. The one advertised on its website was made by an American company, BioMedomics. Each kit costs around $2 to manufacture and no more than $9 to buy wholesale.

David Thomas, managing director of AlphaBioLabs, said that the cost of the test was only one expense in their marketing. The company also pays for a demonstration by a medical worker and online tutorials for businesses with larger orders. He also pointed to rising component costs, and packaging and logistical expenses.

Mr. Thomas declined to answer questions about how much profit the company made per test or how many it had sold, but he said that the profit margin was “very modest and in line with industry norms.”

BioMedomics confirmed that the British lab had placed an order for coronavirus tests — a minimum order is 1,000 kits — but would not provide any further details. “As a small company,” said a spokesman, Kent Lupino, “while we try to vet resellers as best we can, we do not have control over all those who would use this pandemic as an opportunity to blatantly profiteer from those in need.”

AlphaBioLabs said it was hoping to clear its backlog of orders and had enlisted manufacturers with offices in China, Germany and the United States, but refused to name them. Going forward, Mr. Thomas said, the lab would sell the tests only to the N.H.S., emergency services and to businesses classified by the government as “critical infrastructure companies.”

“AlphaBioLabs is absolutely not profiteering from this global health pandemic, but providing a vital service which is in great demand,” he added.

Annelise Wilder-Smith, a professor of emerging infectious diseases at the London School of Hygiene and Tropical Medicine, said that governments should set a cap on the price and number of tests available through the private sector.

“While I am all for liberal and extensive testing, and am not against the private sector offering testing,” she said, “the government needs to clamp down on any exploitation during a time of crisis.”

Dr. Ali, who runs the Private Harley Street Clinic in London, said he was unrepentant about his trading, after taking orders for nearly 7,000 tests at £375 each. He said he had donated 100 tests to the N.H.S.

“I’m entirely comfortable with the price, and if somebody else wants to offer it for less, that’s fine,” he said in an interview. “I believe the people should be tested, so I’m going to offer it.”

What Dr. Ali is offering for that £375 takes some explanation.

The Private Harley Street Clinic does not manufacture the coronavirus test kits, nor does it distribute them or process any test results. Yet it has sold the testing kits for more than three times the £120 that the manufacturer, Randox Laboratories in Northern Ireland, charges the public directly.

Once ordered on the Private Harley Street Clinic website, the tests are shipped from Randox directly to customers without ever passing through the clinic. Dr. Ali declined to say what he paid for the kits and claimed not to know what profit he had made, but he said that his price included clinical advice.

Private Harley Street Clinic’s main asset appears to be the marketing value its name brings through an association with the renowned medical street in London — despite company records showing that the “clinic” is actually based at Dr. Ali’s apartment, miles away in North London.

The firm was incorporated in 2017 shortly after Dr. Ali’s two previous companies, which had almost identical names, were struck off the government’s register of companies for failing to provide required financial data. Private Harley Street Clinic was also threatened with being struck off until it posted financial accounts last summer, which showed that it had total net assets of less than £200.

Dr. Ali said that his clinic had delivered orders for tests worth £1 million so far and that he had been so overwhelmed with requests that he had been forced to hire temporary employees to take calls. The doctor said he planned to hire more staff members this week to help cope with the surge.

“I basically had to create a war cabinet,” he said. “We’re responding to a national emergency.”

But despite the extra staffing, and assurances on his website that customers would receive their test returns within three days, the first results were expected to start arriving on Tuesday, more than a week after the service was introduced.

Randox is one of the private labs in discussions with public health officials in Britain about providing tests, but it has already been overwhelmed with demand from the private sector. If the lab did sign a deal with the N.H.S., Dr. Ali said, he would stop selling the kits privately.

Amy Millar, a spokeswoman for Randox, confirmed that the company was “in discussions with various health bodies, including Public Health England, on how to utilize the test to help” in the coronavirus response. The company added that it had developed the test for a “very competitive price” but had “no control” over what retailers charged or what customers were prepared to pay.

Neither of the tests developed by Randox or BioMedomics have been approved by the British or American authorities, though both are accredited labs and have European health and safety certification.

Chris Whitty, chief medical officer for Britain, said last week that the government was in talks with several companies about antibody tests but warned that officials were still not sure that the kits “currently on the market are the right ones.”

The official advice is for people to avoid rapid, at-home coronavirus tests because there was “little evidence to the accuracy of their tests.” Indeed, AlphaBioLabs acknowledged that “screening testing devices are known and accepted by scientists to not be as accurate as laboratory confirmatory testing.”

Professor Wilder-Smith of the London School of Hygiene and Tropical Medicine said that that was why the government needed to take control of testing, to determine “who sells tests where, at what price and at what standard.”

“Both a false positive and a false negative test will have negative consequences,” she noted.

Other kits, however, are just fraudulent.

Last week, the European Anti-Fraud Office began an inquiry into fake coronavirus products, including counterfeit test kits, masks, medical devices and sanitizers, that were being sold around the world for “potentially huge illicit profits.”

A few days after the investigation was opened, a 59-year-old man, Frank Ludlow, appeared in court in Brighton, southern England, accused of making fake kits that he had touted as a treatment for the novel coronavirus but that actually contained potentially harmful chemicals.

He was arrested after the law enforcement authorities in Los Angeles intercepted a package containing 60 of the fake kits.