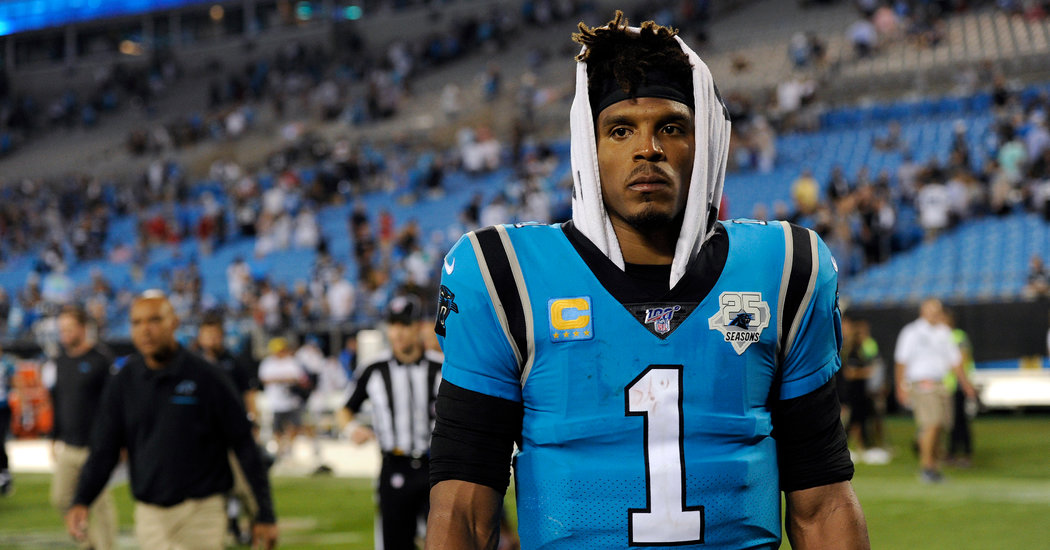 The Carolina Panthers portrayed their decision to part after nine seasons with quarterback Cam Newton as a magnanimous gesture. They announced last week that they were granting him, the best player in franchise history, permission to seek a trade.

But as teams around the N.F.L. scurried to add quarterbacks, Newton languished in a sort-of purgatory, neither part of Carolina’s plans nor openly desired by another team, at least with his health uncertain. He lingered there until Tuesday, when the Panthers, with no leverage to push for compensation, released him. It was an unceremonious, if by now expected, conclusion to his career in Carolina, where his Superman-referencing touchdown celebrations, sartorial panache and dazzling, if sometimes uneven, play vaulted the Panthers into relevance.

“He’s the ultimate competitor and it physically hurts him to lose,” Panthers general manager Marty Hurney said in a statement. “He willed this team to victory on many occasions and will always be considered one of the greatest players in the history of this franchise.”

At his apex, Newton, who turns 31 in May, dominated with his arm and feet, winning the N.F.L.’s Most Valuable Player Award in 2015. His comfort with college concepts, picked up at the University of Florida and powerhouse Blinn College and honed at Auburn, helped fuel the read-option style that has since infiltrated the league. But shoulder problems slowed him at the end of the 2018 season, and he had the misfortune of sustaining a more serious injury — to the Lisfranc ligament of his left foot, necessitating surgery — a few months before a pandemic disrupted off-season N.F.L. player movement.

Newton, who was placed on injured reserve in early November, missed the Panthers’ final 14 games, meaning that potential suitors have not watched him play since Week 2, when he completed 49 percent of his passes in a loss to Tampa Bay. Since players are barred from traveling to teams’ practice facilities, this off-season is more challenging than normal for Newton to demonstrate his recovery.

It is a reflection of both the quick-moving quarterback market and the state of the league amid a global crisis that Carolina found a deal to trade another of its quarterbacks — Kyle Allen, who started in Newton’s absence — for a fifth-round pick (from Washington) and yet could locate no compensation for a player of Newton’s caliber.

Newton is listed at 6-foot-5 and 245 pounds but somehow seems bigger, and ever since Carolina drafted him first overall, in 2011, he has been synonymous with a franchise transformed by his arrival. Now he is gone, as are so many familiar Panthers, from safety Eric Reid (released) to longtime coach Ron Rivera (fired, in December) to the star middle linebacker Luke Kuechly, who retired in January.

Since losing to Denver in Super Bowl 50, Carolina has finished in last place in the N.F.C. South more often (twice) than it made the playoffs (once). It has embarked on a grand retooling since the team’s 2018 sale to owner David A. Tepper, who wants to enhance conditions for players and fans — a new practice facility in South Carolina and an upgraded stadium in Charlotte, N.C. — while supplementing his portfolio with a Major League Soccer franchise.

He lured a new coach, Matt Rhule, from Baylor with a seven-year contract reportedly worth about $60 million, and authorized the hiring of a coveted offensive coach, Joe Brady, from national champion L.S.U., to return the Panthers to glory. They homed in on Newton’s successor last week, signing Teddy Bridgewater to a three-year deal, and as other teams also rushed to add quarterbacks — Tom Brady to Tampa Bay, Philip Rivers to Indianapolis, Marcus Mariota to Las Vegas — Newton found himself on the periphery, like Jameis Winston, another former No. 1 overall pick in search of a new home.

There are, for Newton and Winston, fewer obvious spots than quarterbacks available. Even though the Los Angeles Chargers have professed that they will forge ahead with Tyrod Taylor (and, perhaps, a quarterback drafted in April), Newton would look marvelous on a team that appears to have improved this off-season. And New England, rumor has it, could be looking for a quarterback, too.

In the cold, remorseless N.F.L., longtime relationships rarely end with both parties satisfied. Even Eli Manning, who concluded his retirement speech in January by pledging eternal loyalty to the Giants, endured a difficult final season, in which he was benched for much of it. Newton, per his response to a Panthers post on Instagram last week, said was “forced” into consenting to be traded.

At this stage, it is really just semantics. He and the Panthers have moved on from each other, and just how long Newton remains unemployed depends, in large part, on his health, which will determine whether he re-emerges as a solid quarterback — let alone an elite one — once more.