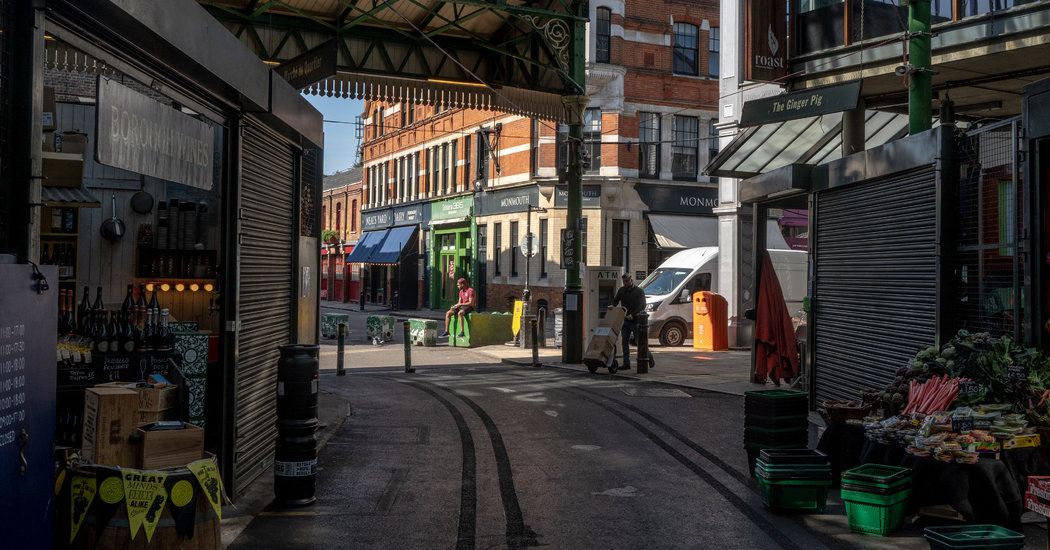 LONDON — A day after Prime Minister Boris Johnson imposed a virtual lockdown on Britain, London’s subways teemed with rush-hour passengers while a tugboat plied its way up the Thames, a speaker serenading the handful of pedestrians ashore with the Monty Python song “Always Look on the Bright Side of Life.”

It was a day of confusion and contradictory images in Britain, as people struggled to adapt to a national shutdown that, while unprecedented in the post-World War II era, still fell short of those in force in France, Spain or Italy.

Much of London was deserted, as Britons responded with stoicism and greater acceptance than they had shown to previous efforts to curb the spread of the coronavirus. But the new restrictions raised vexing questions, particularly about what kind of jobs were vital enough to warrant leaving home.

On Monday evening, Mr. Johnson asked Britons to stay in their houses for the next 21 days, except for occasional trips out for food, medicine, or exercise. He carved out an additional exception for people commuting to work “where this is absolutely necessary and cannot be done from home,” but left it to employers to decide whether to tell their staff to work from home.

Commuters swarmed into Underground stations on Tuesday, where the sharply reduced service meant that trains were as packed as on an ordinary workday, and the government showed no inclination to reduce those numbers. Instead, it urged Transport for London, which is run by the city’s mayor, Sadiq Khan, to restore normal service.

“In work, in many, many instances, the two-meter rule can be observed,” said Britain’s health secretary, Matt Hancock, referring to the social distancing that the government is promoting. Those who cannot work from home should go to work, he said, “to keep the country running.”

Part of the problem, analysts said, is that the government has not yet rolled out fiscal measures to cushion the blow to self-employed workers who lose their jobs. Britain’s chancellor of the Exchequer, Rishi Sunak, said that the Treasury was scrambling to put together a package, but that it was “incredibly complicated.”

Britain’s determination to keep parts of the economy operating, even as it tries to isolate much of society, carried echoes of the debate in Washington, where President Trump has argued that shutting down the economy for several months could be more damaging than the epidemic itself.

There were signs of a split within the United Kingdom over how the new rules should be applied. The Johnson government said construction on commercial and residential sites could continue, since those workers were able to practice proper distancing. But the authorities in Scotland closed down construction of everything but hospitals.

In London, Mr. Hancock said the government would build a temporary hospital, with capacity for 4,000 patients, in the ExCel Center, a cavernous conference center in the docklands. The hospital, one of at least four planned for the country, will start treating virus patients “within days,” he said.

The number of reported coronavirus cases in Britain rose to 8,077 on Tuesday, an increase of 1,427 from Monday, while the death toll increased by 88, to 422, the largest single-day jump since the contagion began.

As hospitals filled up, Mr. Hancock announced a campaign to recruit 250,000 volunteers to help the overburdened National Health Service. The volunteers will also help the 1.5 million elderly people that the government has asked to quarantine themselves for 12 weeks. About 12,000 retired doctors and nurses have agreed to return to work.

Public-health experts said Britain’s lockdown had finally put the country on the right track after two weeks in which Mr. Johnson resisted taking stronger measures. But some still expressed anxiety that the government was not moving fast enough to expand testing and contact tracing to curb the spread of the virus.

“We’ve definitely bought time,” said Professor Devi Sridhar, director of the global health governance program at Edinburgh University. “My fear is that people will think the lockdown solves the problem. We need to do much more testing, tracing, and isolating to use the next three weeks properly.”

Even members of Mr. Johnson’s Conservative Party criticized the government for the sluggish pace in testing.

“We appear to be testing on a daily basis virtually no more people than we were over a week ago, when the commitment was to increase the daily number of tests from 5,000 to 25,000,” Jeremy Hunt, a former health secretary, said in Parliament.

Testing, Mr. Hunt noted, was “a vital part of the success of the suppression strategies in South Korea, Taiwan, Singapore and Hong Kong.”

A dispute over the crowded subways suggested that politics was starting to bleed into Britain’s response to the crisis.

In a televised briefing from 10 Downing Street, Mr. Hancock took a swipe at Mayor Khan, a Labour Party politician.

“There is no good reason in the information that I’ve seen that the current levels of tube provision should be as low as they are,” Mr. Hancock said. “We should have more tube trains running.”

Minutes later, a spokesman for the mayor fired back, saying that nearly one-third of the Underground’s staff was unavailable, either because of illness or the need to self-isolate. He criticized the government for refusing to close construction sites or provide “proper financial support” to the self-employed.

There were also questions about how strictly the government plans to crack down on people who flout the restrictions.

While Mr. Johnson said the police would enforce the lockdown, and there were photos of police shutting down stores, the British police force is stretched thin. And the fine for those who violate the rules is only £30 — about $35 — though officials said it might increase.

The government even struggled to explain how the new rules apply to people in relationships who do not live with their partners. Asked for guidance, the deputy chief medical officer, Jenny Harries, said the government did not want people switching from one household to another.

Perhaps, said Dr. Harries with a rare flash of humor in grim times, “they should test the strength of their relationship” by moving in together.