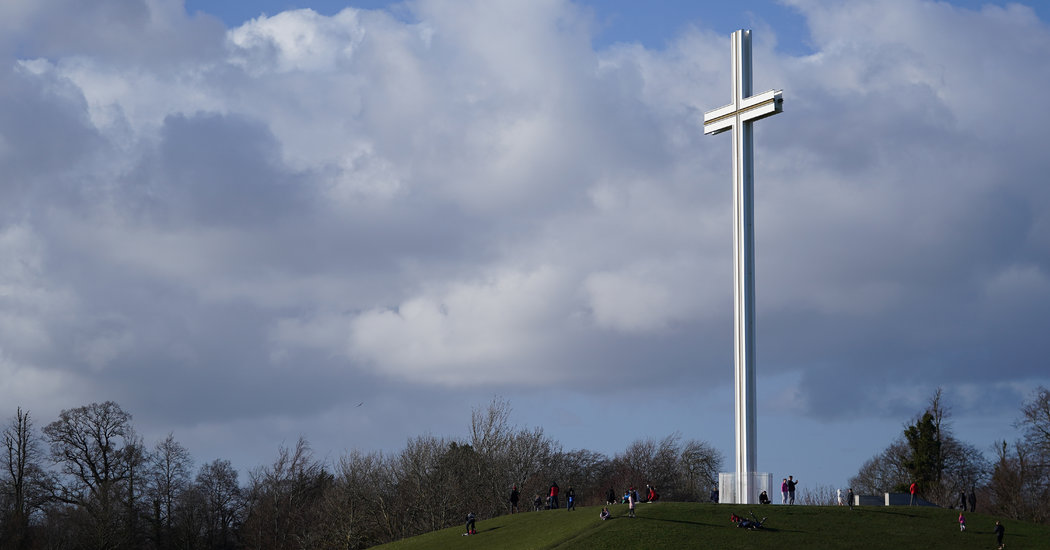 “That was beautiful what they did,” Ms. Ryan said. “And it was for Mom. It was because of who she was.”

When Betty Ryan died at her home in rural Ireland of complications from cancer last week, her family was understandably distraught.

And compounding their grief was a question that is now arising for families around the country: What would they do about her wake and funeral?

Like so many rites in Irish life, death is a social event as much as it is a time of mourning. But a ban on large gatherings because of the coronavirus outbreak has meant that funeral rituals have to be rethought.

Betty was the first person in the village of Ballyferriter, in County Kerry, to die since measures intended to stop the virus’s spread were introduced, and the family feared that their matriarch would not receive a proper send-off.

As her family left a nearly empty church after a private funeral service, they saw their neighbors and friends lining the village street, standing at least six feet apart, dotted along the mile-long route from the church to the graveyard.

And they were singing: “Oro se do bheatha bhaile” — “A Song to Sing You Home.”

“It was so raw,” said Carol Ryan, Betty’s eldest daughter. “It was amazing.”

Despite initially small numbers of confirmed coronavirus cases, Ireland has banned large gatherings, closed schools, pubs, gyms and nonessential shops and urged people to socially distance themselves in an effort to prevent a larger outbreak.

The measures were put into place more than a week before neighboring Britain, and local reports indicate that much of Ireland has largely complied. But these changes have meant an end to the community-centered wakes and funerals that define end-of-life rituals in the country.

Communities all over the world are grappling with the new normal in places where public life is coming to a halt. And at a time when the possibility of death pervades the public and private spheres to a degree largely unknown outside wartime, people are having to rethink how they bury their dead.

Ireland prides itself on doing death well, and the Irish wake, rooted in Roman Catholic tradition, has a certain formula to it — a routine built into the muscle memory of how a family, and a place, grieves. It’s a communal goodbye.

People are waked in their homes, and in most places an entire community visits to pay their respects. “I’m sorry for your troubles” is the common refrain as visitors shake hands with the family, offer embraces and words of comfort, and say a prayer over the body, displayed in an open coffin except in rare circumstances.

Mourners stay and have tea or a drink, and sit and share memories of the dead as the entire town circles through. Funerals draw equal attention, with packed pews and Communion the norm. Death notices are read out daily on local radio stations, and RIP.ie, a national obituary repository, is widely used.

Now, in a time when the nation has virtually shut down, those death notices have gone from public calls to commiserate with the family to messages like “house private at all times” and notes that funerals will come at a later date.

The Irish Association of Funeral Directors, relying on guidance from the country’s public health service, has advised that funerals can be held privately behind closed doors with just family and close friends. But there should be no public advertisement of funeral arrangements, no public reposing or home gatherings, and “social distancing must be maintained with no handshaking or hugging.”

Kevin Toolis, a writer who has spent much time reflecting on the Irish way of death, said the virus had put a stop to some of the “implicit therapeutic rituals” that come with mortality.

“We are forgetting that people die very ordinary deaths — cancer, old age, traffic accidents, heart attacks,” he said. “As they were shaking your hand, they were also sort of doing this incredible sort of grief exercise.”

The Scottish-born son of Irish parents, Mr. Toolis has become something of an expert on death in Ireland, having written a book on the subject, “My Father’s Wake: How the Irish Teach Us to Live, Love and Die.”

The traditional community-centered wake in the home has remained a tradition in Ireland despite falling out of fashion in much of the West after the 19th century.

“People say to me, ‘Why do the Irish still do it?’” Mr. Toolis said. “But the real mystery is why everyone else stopped doing it.”

He called the scenes from Betty’s funeral in Ballyferriter “a minor act of genius in a small community” and “a tremendous working-class example of social distancing.”

Betty’s family had time to prepare for her death: Three years ago, she was found to have a rare form of blood cancer. Before that, her daughter said, the energetic and outdoorsy grandmother of nine often cycled more than 10 miles a day. She ran a child care center and had a pottery business, but in recent months it had become clear that the illness would claim her life.

Days before her death, she knew the end was near and told her four children and husband, Denis, that it was time to let her go. Along with coming to terms with that loss, they had to adjust to the fact that her death coincided with the largest social shutdown the world has seen.

When Carol’s brother called the local funeral director to tell him of their mother’s death, the undertaker was clear: They were in “uncharted waters.”

“There was definitely a lot of confusion,” Ms. Ryan said, “but also a lot of sadness and support for us.”

Then an idea from a local resident, Tor Cotton, began circulating as the family made their arrangements. For Ms. Cotton, it was as much about comforting the Ryan family as it was about ensuring that Betty received a proper send-off and ensuring that space was given for the community to mourn her.

“I really like the way we handle death here — people are really directly engaged with it,” Ms. Cotton said. “And when somebody dies, there’s a whole process.”

Without that process, she knew people would be left wishing they could pay tribute to Betty and “let the immediately family know that they care.”

And so she helped create an opportunity for the larger community to say goodbye. Ms. Cotton sent messages to close neighbors and posted a message on Facebook asking that residents of the town honor Betty and her family by lining the road from the church to the cemetery with one caveat: that they remain more than six feet apart.

“That was beautiful what they did,” Ms. Ryan said. “And it was for Mom. It was because of who she was.”

Since the video of Betty’s wake spread online, other communities in Ireland have adopted similar sendoffs, with neighbors standing watch as the dead make their final journey.

Mr. Toolis is confident that the old ways will return when the restrictions are lifted, because they are so hard-wired into Irish life. But for now, communities have to make due.

“Even in this moment of great fear,” he said, “people have adapted one of the defining rites of their culture in a way that is safe for everyone and an acknowledgment of bereavement and loss.”