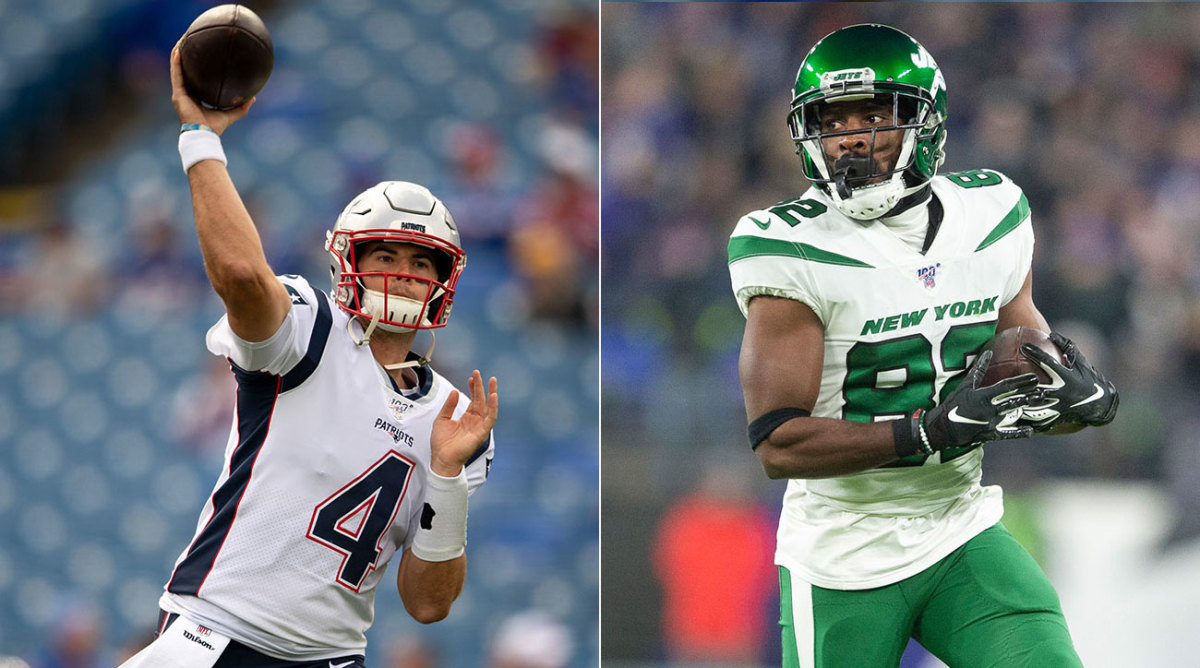 With the trade for Vikings wide receiver Stefon Diggs having addressed Buffalo’s only notable need on offense, GM Brandon Beane and head coach Sean McDermott can shift their focus to their defense, which last season played like the single best-coached unit in football. That unit, however, lost arguably its best defensive lineman (certainly best interior lineman, at least) when free agent defensive tackle Jordan Phillips signed with Arizona. This puts the Bills in play for a defensive tackle should they come across one they absolutely love, but considering that they’ve added deceptively versatile ex-Seahawk Quinton Jefferson and former Panthers first-round pick Vernon Butler, it’s unlikely Beane and McDermott will reach for anyone at this position. An upgrade specifically at nose tackle could be in order, except pricey incumbent veteran Star Lotulelei cannot be dismissed cheaply for another two years.

And so the target becomes defensive end. Come Week 1, top edge rushers Mario Addison and Jerry Hughes will be 33 and 32 respectively; investing multiple picks at their position would make sense. The Bills will also look closely at cornerbacks. Levi Wallace has overachieved in Buffalo’s zone scheme, but not enough to fully stabilize the No. 2 corner spot. Perhaps recently signed ex-Panther Josh Norman can fill the role, but even so, the 32-year-old is coming off a lackluster 2019 season in Washington and is under contract for just this season.

Top-100 Targets (Buffalo owns picks 54 and 86): It’s a thin class of edge players, meaning guys who might slip to Round 2 some years (Iowa’s A.J. Epenesa, Penn State’s Yetur Gross-Matos) will likely be gone by the time Buffalo is on the clock. Auburn’s Marlon Davidson is rock solid and fits the culture in Buffalo, while Syracuse’s Alton Robinson is a little more risk/reward but could be dynamic rushing the passer. Among the Day 2 corners, Virginia’s Bryce Hall seems like a perfect fit schematically, or maybe they wait and catch one of the big corners who disappointed in workouts (not unlike Norman): Mississippi State’s Cam Dantzler or Oklahoma State’s A.J. Green.

We can debate whether QB Josh Rosen has truly had a fair shake so far in his NFL career, but what’s clear is the Dolphins do not feel he is The Guy. And because 37-year-old journeyman Ryan Fitzpatrick is also not The Guy (at least not long-term), quarterback becomes Miami’s top need. But let’s say, for the sake of discussion, that Fitzpatrick is the starter in 2020. How does the roster around him look?

Offensively, the additions of left guard Ereck Flowers and center Ted Karras should at least allow the Dolphins to get out from under some of the flimsy screen passes that shoddy O-line play often compelled them to rely on last year. But for this offense to feel completely comfortable with its entire playbook, upgrades must also occur at offensive tackle; projected starters Julién Davenport and Jesse Davis are both better suited for utility backup roles.

A quick skill position player or two would also behoove Miami. As it stands, aside from Albert Wilson, none of these skill players are capable of consistently creating their own space. The games of receivers DeVante Parker, Preston Williams and tight end Mike Gesicki are more predicated on size. Same goes for bruising ex-Bear/Eagle tailback Jordan Howard. And No. 2 back Kalen Ballage? None of his 74 carries last season gained more than 8 yards, as he became the first player in the modern era to rush 60-plus times and average under 2.0 yards per carry. This offense needs a quick, shifty running back or wide receiver.

Defensively, underappreciated ex-Patriot Kyle Van Noy buttresses a Dolphins pass rush that, at times last season, bordered on pathetic. Van Noy will never be mistaken for Von Miller, but he’s more bendable off the edge than people realize. Plus, he is great at all the little things that don’t show up on paper but make a difference. Still, the Dolphins need a true pass rusher opposite Van Noy. Free agent pickup Shaq Lawson had 6.5 sacks and 13 TFLs for Buffalo last season, but an absurdly high percentage of those were circumstantial plays that fell into his lap.

Dolphins head coach Brian Flores is trying to implement a Patriots-style scheme. That approach is uniquely unbeholden to great pass rushers, but just because your pass rushers don’t need high ceilings doesn’t mean they can have low floors.

Flores could look to fortify the pass rush by finding more Van Noy-like hybrid linebackers who can serve as standup interior rushers. (Like what Dont’a Hightower has become for the Patriots.) Intelligent players capable of executing complex blitzes will be key. With the Dolphins making ex-Cowboy Byron Jones the NFL’s highest paid cornerback just 10 months after signing Xavien Howard to a deal worth $39 million guaranteed, it’s clear they’re intent on playing as much iso-man coverage as possible, which suggests their pressure concepts will be aggressive and multiple.

Top-100 Targets (Miami owns picks 5, 18, 26, 39, 56 and 70): The Dolphins have enough draft capital to get pretty much anywhere they want in Round 1—the trouble is that they might have to jump up a few spots to get their desired QB target (presumably Alabama’s Tua Tagovailoa, though it wouldn’t be a shock if they targeted Oregon’s Justin Herbert), but outstanding crop of offensive line talent will likely be gone by the time Pick 18 comes around. That leaves them looking at second-tier prospects like Georgia’s Isaiah Wilson (this is a staff of New England expats, and in New England they love massive right tackles and UGa products) and Boise State’s Ezra Cleveland. As far as pass-rush help, Wisconsin’s Zack Baun and Alabama’s Terrell Lewis fit the bill as versatile, savvy edge players.

It’s hard to believe that “quarterback” is being discussed in a Patriots “team needs” blurb, but here we are. If the Patriots go with Jarrett Stidham, you’ll hear dozens of anecdotes this summer about how the second-year pro is the diamond in the rough that Bill Belichick found in Round 4. And maybe he is; few coaches have a better track record of finding quality mid- and late-round quarterbacks. But veteran Brian Hoyer will get a legitimate crack at the starting job, given that Belichick would likely prefer a QB with a higher floor instead of gambling on a young guy. Either way, the Patriots are likely in the market to draft a high-caliber QB at some point in the near future.

But it might not matter who plays QB if this offense is hamstrung by a slapdash receiving corps like it was in 2019. Even if last year’s first-round pick N’Keal Harry takes a quantum leap in Year Two, there’s still a glaring lack of vertical speed across the board. Opposing free safeties might as well play 12 yards off the ball. No offense has been better at adjusting its system around its receivers’ skill sets than New England. Obviously, some of that was the Tom Brady factor, but if you’re building the roster, you’d be wise to assume that this trend of schematic flexibility will continue under offensive coordinator Josh McDaniels. And so the Patriots can ignore “style of play” and simply take the best wide receiver and tight end on the board at some point in the early rounds and shape their offense from there.

Of course, it might be hard to stockpile receiving talent considering that the defensive front is now minus stout linebackers Kyle Van Noy and Jamie Collins, as well as nose tackle Danny Shelton. But the beauty of New England’s defensive scheme is, up front, it values brains and brawn over speed and quickness. Brains and brawn can usually be found in the middle rounds.

Top-100 Targets (New England owns picks 23, 87, 98 and 100): If it’s about deep speed, Alabama’s Henry Ruggs III would be a gift at 23, though he might not be on the board. New England might sit back until Round 3 where someone is likely to fall, though they might be looking at a Year 1 redshirt with guys like Notre Dame’s Chase Claypool or Baylor’s Denzel Mims. Notre Dame’s Cole Kmet is the most complete tight end available and, while late-first might be a reach, he won’t make it to Round 3. Ohio State’s Malik Harrison seems like a Patriots-style linebacker. At quarterback, don’t be surprised if they pass on a developmental guy like Utah State’s Jordan Love and instead go with Georgia’s Jake Fromm, who won’t wow anyone with physical talent but can handle an expansive playbook early, comes from a Belichick-approved program, and has overachieved before.

Gregg Williams does two things about as frequently as any defensive coordinator: blitz, and play Cover 2. And at times last season he did both simultaneously. (It was an extremely unique combination that involved rushing cornerbacks from both edges.) The beauty of Cover 2 is it gives your corners help over the top. That’s important when one of your nickel outside corners is either 2019 sixth-rounder Bless Austin or undrafted fourth-year man Arthur Maulet. But Williams’s variegated Cover 2 concept asks cornerbacks to sometimes rush the passer or roll back to safety. And when Williams is just blitzing straight up, his corners are inherently counted on to play iso-man outside. That makes the cornerback job too significant to leave in the hands of low-round and undrafted players. The Jets addressed one corner spot by signing ex-Colt Pierre Desir, an accomplished press defender who was available because of a bad finish to the 2019 season.

That said, New York’s need at wide receiver might still be bigger. Even if free agent Robby Anderson is retained, the Jets still need a Z-receiver who can flex around the formation and win at the intermediate levels. And considering the team can save $10.5 million in cap space next offseason by cutting Jamison Crowder, they might keep an eye out for a long-term slot option. Plus, if Anderson is not retained, then the Jets are relying on ex-Redskin Josh Doctson or backup Vyncint Smith to fill the all-important X-receiver duties. In short, the Jets can go after any type of receiver imaginable.

Top-100 Targets (Jets own picks 11, 48, 68 and 79): Oklahoma’s CeeDee Lamb might make it to 11, and he fits the bill as a potential No. 1 receiver. Alabama’s Jerry Jeudy does too, albeit as a different style of receiver than Lamb, an undersized, absurdly quick route-running maestro. (If they wait until Day 2 to address receiver, could they take Florida’s Van Jefferson, son of receivers coach Shawn Jefferson?) The Jets can probably wait until Day 2 and take their pick of second-tier corners. There’s a chance Clemson’s A.J. Terrell or LSU’s Kristian Fulton could fall into the middle of the second. As could Virginia’s Bryce Hall, though stylistically he might be too similar to Desir. If they’re patient, Auburn’s Noah Igbinoghene, a converted receiver, could end up a Day 2 find.