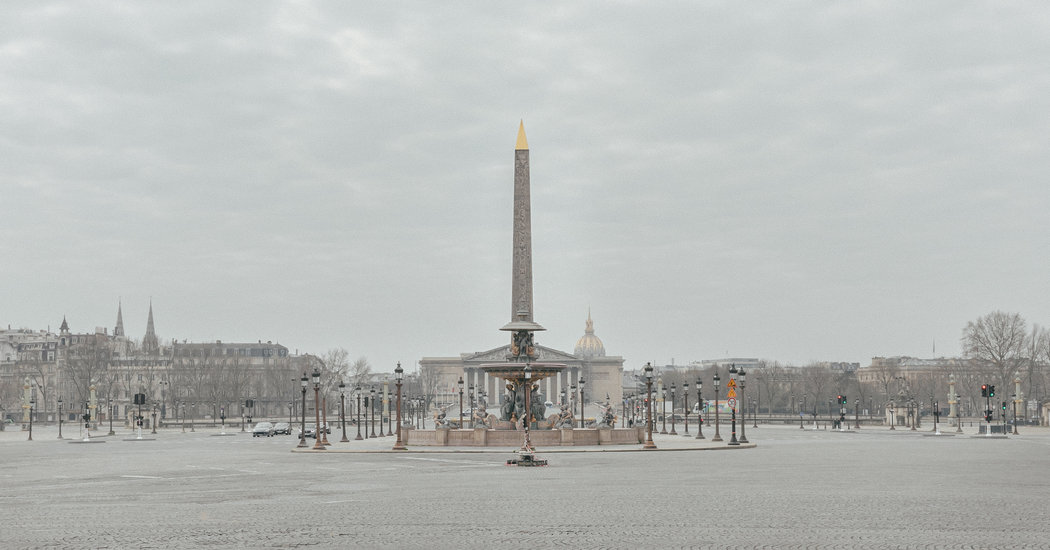 During the 1950s, New York’s Museum of Modern Art organized a famous photo exhibition called “The Family of Man.” In the wake of a world war, the show, chockablock with pictures of people, celebrated humanity’s cacophony, resilience and common bond.

Today a different global calamity has made scarcity the necessary condition of humanity’s survival. Cafes along the Navigli in Milan hunker behind shutters along with the Milanese who used to sip aperos beside the canal. Times Square is a ghost town, as are the City of London and the Place de la Concorde in Paris during what used to be the morning rush.

The photographs here all tell a similar story: a temple in Indonesia; Haneda Airport in Tokyo; the Americana Diner in New Jersey. Emptiness proliferates like the virus.

The Times recently sent dozens of photographers out to capture images of once-bustling public plazas, beaches, fairgrounds, restaurants, movie theaters, tourist meccas and train stations. Public spaces, as we think of them today, trace their origins back at least to the agoras of ancient Greece. Hard to translate, the word “agora” in Homer suggested “gathering.” Eventually it came to imply the square or open space at the center of a town or city, the place without which Greeks did not really regard a town or city as a town or city at all, but only as an assortment of houses and shrines.

Thousands of years later, public squares and other spaces remain bellwethers and magnets, places to which we gravitate for pleasure and solace, to take our collective temperature, celebrate, protest. Following the uprisings in Tiananmen Square, Tahrir Square, Taksim Square and elsewhere, Yellow Vest protesters in France demonstrated their discontent last year not by starting a GoFundMe page but by occupying public sites like the Place de la République and the Place de l’Opéra in Paris.

Both of those squares were built during the 19th century as part of a master plan by a French official, Baron Georges-Eugène Haussmann, who remade vast swaths of Paris after the city passed new health regulations in 1850 to combat disease. Beset by viruses and other natural disasters, cities around the world have time and again devised new infrastructure and rewritten zoning regulations to ensure more light and air, and produced public spaces, buildings and other sites, including some of the ones in these photographs, that promised to improve civic welfare and that represented new frontiers of civic aspiration.

Their present emptiness, a public health necessity, can conjure up dystopia, not progress, but, promisingly, it also suggests that, by heeding the experts and staying apart, we have not yet lost the capacity to come together for the common good. Covid-19 doesn’t vote along party lines, after all. These images are haunted and haunting, like stills from movies about plagues and the apocalypse, but in some ways they are hopeful.

They also remind us that beauty requires human interaction.

I don’t mean that buildings and fairgrounds and railway stations and temples can’t look eerily beautiful empty. Some of these sites, like many of these photographs, are works of art. I mean that empty buildings, squares and beaches are what art history textbooks, boutique hotel advertisements and glossy shelter and travel magazines tend to traffic in. Their emptiness trumpets an existence mostly divorced from human habitation and the messy thrum of daily life. They imagine an experience more akin to the wonder of bygone explorers coming upon the remains of a lost civilization.

They evoke the romance of ruins.

It will be the moment we return.

London This is what rush hour looks like now in a major metropolis.Andrew Testa for The New York Times

Munich A subway without commuters.Laetitia Vancon for The New York Times

Moscow The seats were empty at rehearsal, and remained so for the online performance.Sergey Ponomarev for The New York Times

Beijing A lone diner in a neighborhood known for its nightlife.Gilles Sabrié for The New York Times

New Jersey The Americana Diner in West Orange was open — but only for takeout.Bryan Anselm for The New York Times

Srinagar, India In a tourist season without tourists, boats without passengers.Atul Loke for The New York Times

Bangkok Streets of fear in a city popular with Chinese visitors from Wuhan.Amanda Mustard for The New York Times

Berlin Keep your distance: That is the plea from the German government.Emile Ducke for The New York Times

New Delhi A day at the fair in Red Fort.Saumya Khandelwal for The New York Times

Rome The view from the Spanish Steps.Alessandro Penso for The New York Times

Washington Even cherry blossom season did not draw visitors to the Lincoln Memorial.Alyssa Schukar for The New York Times

Tokyo When the world stops traveling.Noriko Hayashi for The New York Times

Seoul South Korea’s outbreak was, for weeks, the worst outside China.Woohae Cho for The New York Times

Seattle A hot dog was as unlikely as a visit to the Space Needle.Grant Hindsley for The New York Times

Milan The Navigli, where the Milanese often gather at the end of the day.Alessandro Grassani for The New York Times

San Francisco California residents have been ordered to stay home.Rozette Rago for The New York Times

Pakistan No standees, and few seat takers.Saiyna Bashir for The New York Times

New York A major transit hub, the Oculus, in a city no longer on the move.Victor J. Blue for The New York Times

Yangon, Myanmar Nothing to see here: Tourists used to come for the panoramic view.Minzayar Oo for The New York Times

São Paulo The last picture show, or one of them, before theaters were shut.Victor Moriyama for The New York Times

Siem Reap, Cambodia No visits to Angkor Wat, and no Pub Street toasts afterward.Adam Dean for The New York Times

Yogyakarta, Indonesia Only the buildings needed guarding at a temple complex.Ulet Ifansasti for The New York Times

Paris The view is still there, the viewers far less so.Andrea Mantovani for The New York Times

Bogotá, Colombia An empty cloverleaf tells the story of a city on lockdown.Federico Rios for The New York Times