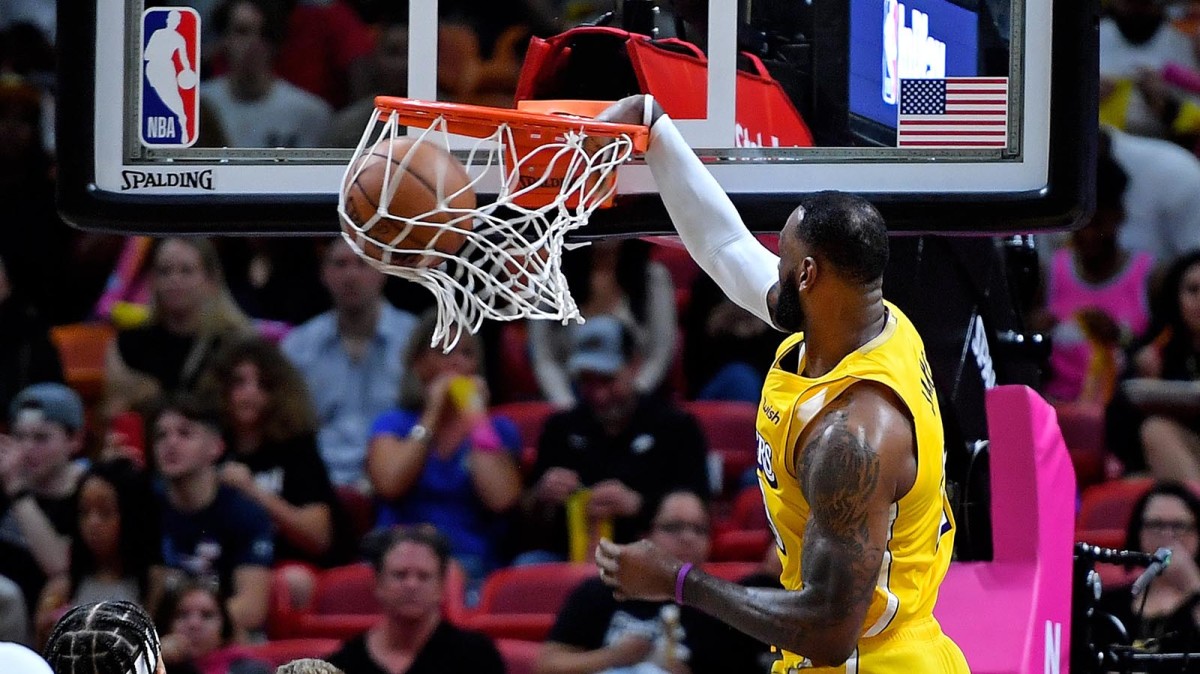 With 9:15 to go in the third quarter of the Los Angeles Lakers – Miami Heat game played on Dec. 13, LeBron James drove to the hoop and blew past his defender, Jimmy Butler. James then leaped in the air. As Heat center Myers Leonard looked on helplessly and as many of the 20,013 fans in the AmericanAirlines arena watched in awe, James powerfully dunked the ball with his right-hand. It is worth a watch: the NBA’s YouTube channel has a nearly 10-minute highlight reel of the game and the play leading to the dunk begins at the 4:11 mark.

The Lakers would go on to defeat the Heat 113-110 for their 13 straight road win. James, who scored 28 points and dished out 12 assists, missed a triple-double by just one rebound.

James’s thunderous dunk occurred only a few months ago and yet seems like an event from a distant past. The coronavirus disease pandemic has led to more than 40,000 Americans testing positive for COVID-19, with over 400 deaths attributed to the virus. Less importantly, the pandemic has upended our way of life. This is apparent with respect to jobs, in-person interactions and entertainment, such as the watching of NBA games. On Mar. 11, the league indefinitely suspended the 2019-20 season. It will be months before we see dunks in NBA games and an even longer time before 20,000 people get to watch them in person.

Yet dunks from the old world can still give rise to lawsuits. This brings us to Steve Mitchell, a seasoned photojournalist whose photographs have appeared in major publications, including Sports Illustrated and ESPN. He is in the business of licensing his photographs to online and print media for a fee. Mitchell was working at the Lakers-Heat game and captured James’s dunk from a compelling angle. Mitchell’s photo makes it appear as if James is almost flying in the air.

James, or the staff who run his Facebook page, apparently thought so highly of Mitchell’s photo that they posted a cropped version of it for public viewing on Dec. 14. As of this writing, the Facebook post is still up. It has attracted more than 1,400 likes, loves or wows, has generated 61 comments (almost all of which are extremely praiseworthy of James) and has been shared 92 times. Here’s an embedded image of the cropped photo, which also appears on James’s Instagram page”:

The manner in which James used and promoted the cropped photo is now the subject of a copyright infringement lawsuit in the U.S District Court for the Southern District of New York.

On Mar. 17, New York copyright attorney Richard Liebowitz (who is also a photographer) filed a federal complaint on behalf of Mitchell. James is named as a defendant. So too are a pair of companies connected to James: Uninterrupted Digital Ventures and LRMR Ventures, both of which, the complaint asserts, operate James’s Facebook page.

The defendants are accused of infringing’s Mitchell copyright by reproducing and publicly displaying the photograph without the photographer’s consent. Mitchell demands a jury trial to assess whether Section 501 of the federal Copyright Act was violated. He seeks damages that would reflect profits, income, receipts and other benefits derived by James and his co-defendants or, in the alternative, damages of up to $150,000 per infringement. Judge Ronnie Abrams, a former federal prosecutor and adjunct professor at Columbia Law School, is presiding over the litigation.

The fact that James is featured prominently in Mitchell’s photo did not give James the right to publish it elsewhere. Mitchell owns his photos. This goes to the essence of copyright law: absent a contractual relationship that instructs otherwise, Mitchell possesses copyrights in his creative works, including his photos. As a result, Mitchell has the right to control the reproduction of his photos, such as their publication on social media websites. He can decide whether to license his photos and, if so, demand financial compensation for granting a license. Those who interfere with Mitchell’s copyrights are potentially liable for infringement.

According to the complaint, Mitchell went a step further in protecting his rights. He did so by registering the photo with the U.S. Copyright office. One doesn’t need to register a creative work—be it a photo, song, novel, poem, video game code or other artistic production—in order to secure a copyright in that work. The copyright exists from the moment the work is created and fixed in a tangible form. However, registration provides additional legal protections. They include official notice of ownership in the public record (so an infringer can’t claim to have not known), the ability to sue for infringement and, in some instances, the prospect for obtaining higher monetary damages. Mitchell presumably obtained registration in the Dec. 13 photo after James published his post on Dec. 14. Mitchell would nonetheless stress that James has not yet taken down his post and its usage of a cropped photo.

Even though James is clearly the focus of Mitchell’s photo, that fact has no bearing on the photo’s ownership. It is Mitchell’s photo. That’s not to say James lacks rights in how a photo of him is used. James enjoys a “right of publicity” that encompasses his image in photos. While the scope of the right of publicity varies by state, and while the First Amendment sometimes limits its application, the right generally protects one’s name, image, likeness and associated identity traits from unauthorized commercial use. James can sue violators for misappropriating his right of publicity.

If the right of publicity sounds similar to the ongoing legal and legislative debate over college athletes’ names, images and likenesses, that’s because it is. There is no federal right of publicity, but advocates for college athletes have demanded one given that NCAA amateurism rules generally forbid athletes from being able to license their names, images and likenesses. James’s right of publicity during NBA games is not at issue here. James, like all NBA players, is governed by in-game and out-of-game licensing policies agreed to by the National Basketball Players’ Association and the NBA. Those policies include the right for professional photos to be taken of players during games.

Attorneys for James will answer Mitchell’s complaint and raise defenses. One likely defense is “fair use.” This defense would assert that while Mitchell may be the rightful owner of the original photo, James’s publication of a cropped version was permissible.

Fair use can be established when the use of a copyright work is intended for news reporting, teaching, criticism, comment or one of several other limited purposes. As instructed by Section 107 of the Copyright Act, courts assessing a fair use defense must balance four factors:

· The purpose and character of the use, including whether such use is of a commercial nature or is for nonprofit educational purposes;

· The nature of the copyrighted work (the more creative the work, the harder it is for a defendant to establish fair use);

· The amount and substantiality of the portion used in relation to the copyrighted work as a whole; and

· The effect of the use upon the potential market for or value of the copyrighted work.

As to the nature of the copyrighted work, James’s attorneys might insist that Mitchell’s photo was not especially imaginative or unique. After-all, it was a photo of what happened at one moment during a basketball game. It thus served to capture and convey a point of information—James dunking the basketball at the conclusion of a play. It didn’t tell a new story or offer lyrics for a fresh song. It simply told what had already occurred.

James’s attorneys could also point out that the Facebook photo is clearly altered from Mitchell’s photo. The cropped version amplifies the appearance of James, with Leonard and JaVale McGee also visible. The original photo, in contrast, displays a much wider and higher view, with Anthony Davis, Butler, a referee, many more fans and the backboard visible. One could argue that the Facebook version is all about James’s dunk whereas the original version is more about the scene in which James dunked.

In terms of the impact of James’s post on Mitchell’s market for the photo, James’s attorneys might maintain that Mitchell could still license the original version. Unless Mitchell can prove he lost potential licensing money, James’s attorneys could insist there is no reason to believe that James posting a cropped version impacted the market.

On behalf of Mitchell, Liebowitz would be armed with rebuttals to a fair use defense.

For starters, while James didn’t earn payments or royalties through his public Facebook post, the post helps to expand his brand. James clearly uses his brand for commercial purposes. His Facebook page has been liked by 23.1 million accounts and has 24 million followers. Through that page, James promotes endorsed products, including Nike apparel. He also markets products and services related to his business empire, such as films produced by his video-production company, Spring Hill Entertainment. The posting of an exciting dunk could help James attract new Facebook likes and follows and also help to maintain the interest of those who are already connected.

As to the creative quality of the original photo, while it only captures one moment in a game, it depicts that moment in a dramatic and moving way. An NBA player “flying” through the air has long been a striking image. That was particularly true when that type of image featured Michael Jordan, who, like James, was a once-in-a-generation player.

Liebowitz is also poised to downplay the fact that the Facebook post cropped the original photo. Liebowitz could maintain that the cropped photo “steals” the most crucial aspect of Mitchell’s photo: James flying in the air as part of a dunk. The cropped photo’s removal of several other players and various spectators could be viewed as unimportant. Plus, the Facebook post didn’t alter the photo in any way to suggest originality. For example, the photo’s color wasn’t changed to black and white. Also, it doesn’t seem as if the original photo was restyled through a Facebook image filter or a camera effect. Instead, the cropped photo appears to be a straightforward copy-and-paste from the original, save for the left, right and top portions of the original photo reduced so that the viewer’s focus is more on James.

As to market impact, Leibowitz could insist that James’s Facebook post diminishes the value of the original photo. More than 90 Facebook users have shared the post and its accompanying image. Further, it seems unlikely that James has attempted to prevent reproduction of the cropped version. The more the cropped version is available and seen, arguably the less valuable the original photo becomes and the more damage Mitchell suffers.

It could take some time for the litigation to play out. The pandemic has led to the postponement of many court hearings. In the meantime, expect both sides to try to settle the case. A plausible settlement would be James, who net worth is estimated as somewhere between $450 million and $500 million, paying Mitchell for a license. We’ll keep you posted.