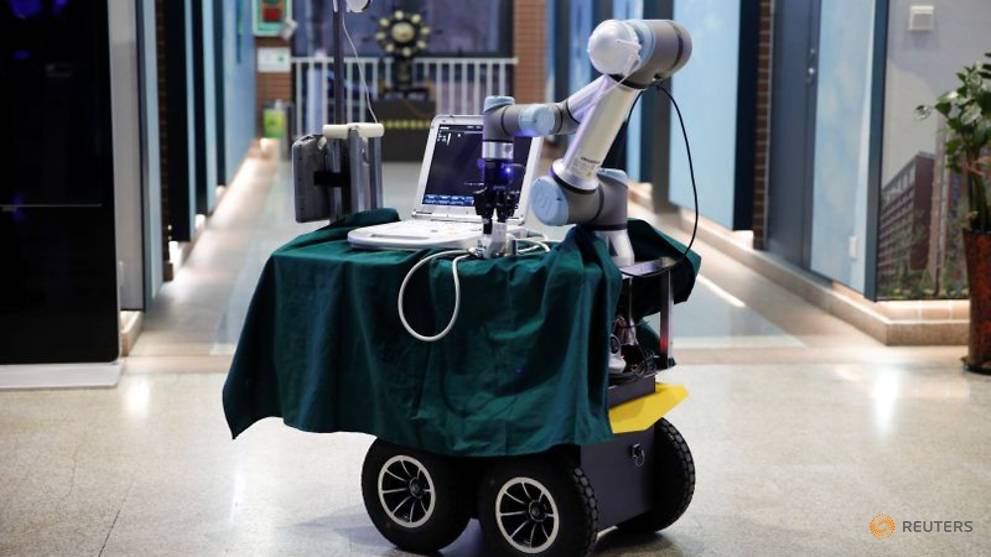 SHANGHAI: Researchers at one of China’s top universities have designed a robot they say could help save lives on the frontline during the COVID-19 outbreak.

The machine consists of a robotic arm on wheels that can perform ultrasounds, take mouth swabs and listen to sounds made by a patient’s organs, usually done with a stethoscope.

Such tasks are normally carried out by doctors in person. But with this robot, which is fitted with cameras, medical personnel do not need to be in the same room as the patient, and could even be in a different city.

“Doctors are all very brave,” said Tsinghua University Professor Zheng Gangtie, the robot’s chief designer. “But this virus is just too contagious … We can use robots to perform the most dangerous tasks.”

The idea came to Zheng around the turn of the Chinese New Year. Wuhan had just been put on lockdown and the number of cases and deaths was rising rapidly every day.

As an engineer, Zheng wanted to do something to contribute to the relief effort. On the first day of the Chinese New Year, he heard from his friend, Dong Jiahong, executive president at Beijing’s Tsinghua Changgung Hospital, that the biggest problem was that of frontline workers getting infected.

Gathering a team, Zheng set to work converting two mechanized robotic arms with the same technology used on space stations and lunar explorers. The robots were almost entirely automated, and could even disinfect themselves after performing actions involving contact, Zheng said.

“But the feedback from doctors was that it would be better for there to be less automation, as a personal presence would comfort and calm the patient,” he said.

The team now has two robots, which have been trialled by doctors at hospitals in Beijing. One is still at the team’s lab at the university, but the other is at the Wuhan Union Hospital, where doctors started training to use it on Thursday.

If all goes to plan, the robot may be put to use on coronavirus patients in Wuhan from Sunday, Zheng said. It would be joined on its ward rounds by a nurse or other member of staff.

Zheng would like to build more such robots but funding from the university has run out. The robots cost RMB500,000 (US$72,000) a piece to make. He does not plan on commercializing his robot design but hopes a company comes along to take that on.

China has sent tens of thousands of medical workers to the epicenter of the outbreak, Hubei province, state media say. More than 3,000 medical workers had been infected by late last month, including whistleblower Li Wenliang, whose death in early February sparked a brief and rare outpouring of grief and rage on Chinese social media.