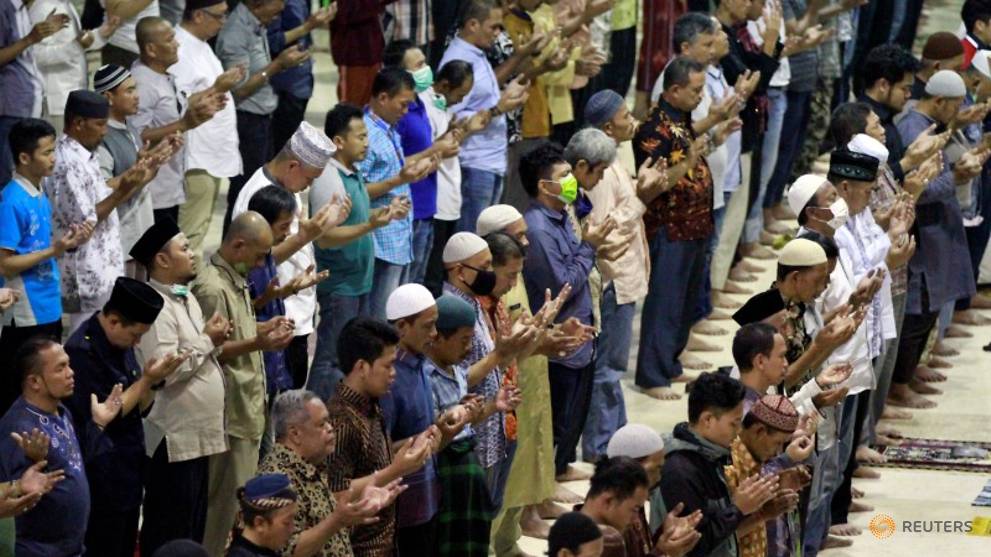 JAKARTA: Some mosques in Jakarta still held Friday prayers on Mar 20 despite an earlier appeal by the government to suspend religious prayers and gatherings for the next two weeks.

On Thursday evening, Jakarta governor Anies Baswedan said communal religious activities including Friday prayers in mosques and Sunday masses in churches should be suspended due to the COVID-19 outbreak.

The Jakarta government will also scale down the purification ritual ahead of next week’s Nyepi (Day of Seclusion) observed by thousands of Balinese Hindus in the city.

Although major mosques in the Indonesian capital as well as those located in government offices cancelled Friday prayers as suggested by the government, some did not.

READ: Indonesians seek to get tested for COVID-19 as tally rises; govt says unnecessary to test everyone

Mr Adnan Munawar, a Jakarta resident, said the mosque near his South Jakarta home announced through its loudspeaker that they would still hold Friday prayers.

“The mosque only said that worshippers should bring their own prayer mats and told the sick to stay at home,” Mr Munawar told CNA, adding that hundreds eventually came to the mosque at noon.

Another resident, Mr Pandu Wiryawan, told CNA that he saw at least three mosques that still held Friday prayers during his commute to work.

Twitter user Aldy also shared a similar experience. “Despite being warned, one of the mosques near where I live insists on conducting Friday prayers, only telling people to bring their own praying mats,” he wrote.

The country’s most influential Islamic body, the Indonesian Council of Ulema (MUI), issued a fatwa (religious edict) on Monday banning mosques from holding Friday prayers if an outbreak at a given area becomes out of control and life threatening.

Governor Mr Baswedan said Jakarta has become such an area.

“In Jakarta, the spread (of COVID-19) is happening very rapidly and right now Jakarta has become one of the epicentres (in Indonesia) with a significant increase of cases,” he told reporters.

READ: Indonesia should ‘prepare for the worst’ on coronavirus: Red Cross

As of Friday afternoon, the outbreak has infected 215 Jakarta residents, more than half of the nationwide tally of 369. Eighteen out of 32 deaths are from Jakarta.

Meanwhile, the city of Depok, which borders Jakarta to the north, announced on Friday morning that it is calling for mosques to cancel Friday prayers and other communal religious activities until Apr 4.

Depok is where the first three confirmed cases of COVID-19 in Indonesia reside.

But the MUI edict and the authorities’ appeal did not bode well with some worshippers, who felt that Friday prayers should be held at mosques.

“Thank God there are still mosques in Jakarta which stage Friday prayers,” one Twitter user wrote.

Another Twitter user even encouraged others to continue performing communal prayer.

“Don’t be afraid to perform Friday prayer at mosques. Have faith in the house of God,” he said.

Meanwhile, Depok resident Ms Yustisia Putri told CNA that people still flocked to a mosque near her home despite it announcing earlier that Friday prayer has been called off.

“(Worshippers) ended up performing zuhur (noon prayer) together,” she said.

The mosque announced on Friday morning that no Friday prayer would be staged, but dozens still come to the mosque to pray.

“I came because I want to perform Friday prayer,” 63-year-old Mr Salman told Detik, adding that he was aware of the mosque’s decision. “I am just curious. Why should (the mosque) be afraid of a disease?”

The mosque’s grand imam Nasaruddin Umar said Islam allows the postponement of Friday prayers in the event of a disaster or to prevent an outbreak.

“Muslims are advised to prevent something which causes more harm than good,” he told a press conference on Friday morning held by the National Disaster Mitigation Agency, which is leading the fight against the outbreak in Indonesia.

“We want people to perform Friday prayer, an obligation we so admire but in a hard time like this … worshippers should pray at home. There is no need to come to the mosque,” Mr Umar said.

Jakarta provincial secretary Saefullah told CNA that it was “understandable” that some mosques still performed Friday prayers, considering that the government only appealed to them to cancel gatherings a day earlier.

“We will talk to leaders of all of the districts, sub-districts, all the way to neighbourhood units, and get them to understand that this step is necessary to contain the disease,” he said.

Meanwhile, Jakarta Catholic Archdiocese has announced in a statement that for the next two weeks, all church activities involving huge number of people will be suspended.

Its vicar Father Samuel Pangestu said that Sunday masses and daily services will be streamed online through the church’s YouTube channel and social media accounts.

Reverend Manuel Raintung, head of the Jakarta Communion of Churches, said his office has advised churches across the capital to do the same.

“In this situation, we are advising church leaders to develop a service which can reach worshippers at home through the help of social media and digital technology, so worshippers can still perform their religious duties at home,” he said in a statement.