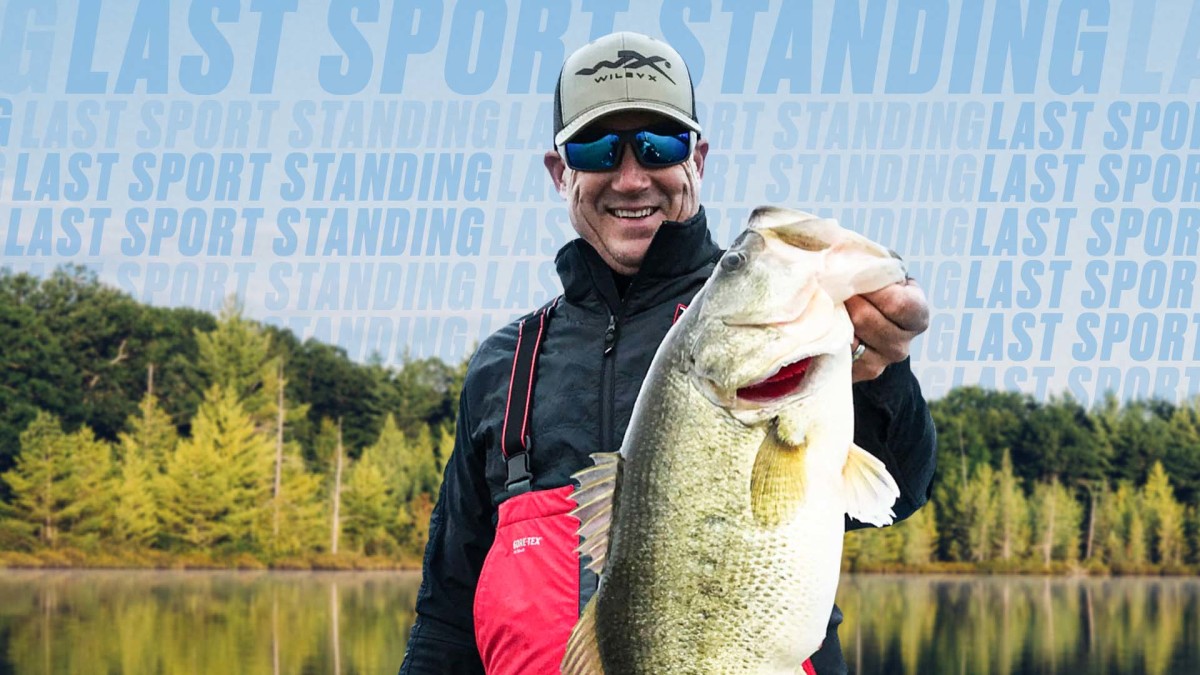 On Wednesday at 10 a.m. Central Time, 10 men took to the murky-green waters of Lake Athens in northeastern Texas. They stood on the bows of 10 separate boats, wearing hats yanked down low, polarized sunglasses, and shirts bearing sponsor logos. For the ensuing eight hours, as a cameraman filmed from within the boat, they cast, and trolled, and cast again, using lures with names like “YUM Dinger.” The whole thing streamed live to computers and phones, with footage to later air on Discovery Channel.

By the late afternoon, Ott DeFoe, a 34-year-old father of three from Tennessee, had landed 69 pounds of bass to win $100,000 and capture stage three of the 2020 Bass Pro Tour of Major League Fishing or, as the organization’s media team pitches it, “The Last Sport Standing.”

Technically, the “last sport” claim is not entirely true. The Iditarod continued through Wednesday in Alaska, for example, and the Australian women’s soccer league plays its final this weekend. And then we can debate what constitutes a sport. But, with all the major pro and collegiate leagues and tournaments shuttered in the U.S. as precautions against the spread of the coronavirus, the unfortunately acronymed MLF, which has seen a 14% rise in viewers from the last tournament—up to a half-million streamers over six days—may indeed be the most popular U.S. spectator sport still going. Whether or not that’s a good thing depends on your perspective.

This week much of the country has lived a dual reality of sorts. While many hole up at home, wondering whether it’s O.K. to go out to walk the dog, others have headed out on Bourbon Street or flocked to the beach. In many respects, Major League Fishing sits somewhere atop this new dividing line, or at least reflects our country’s current cultural split—about how to react to the virus, how to move forward, and who to believe.

Some quick context: Major League Fishing is one of the three highest-profile professional bass tours, along with Bassmasters and Fishing League Worldwide. MLF sets itself apart on two accounts: It’s made for TV (no arenas or large crowds), and the whole thing is streamed live with no cap on fish caught, so both anglers and viewers can see the competition unfold in real time, judged by aggregate weight (traditionally, competitors have kept their five largest fish and brought them to an end-of-tournament weigh-in). In theory, the setup minimizes physical contact. Or, as president and CEO Jim Wilburn explains, “It’s perfect for social distancing.”

The current tournament, stage three of the eight that constitute the season, began Friday. Wilburn says going ahead with the tournament was an easy decision. MLF polled its 80 competitors, and 66 voted yes. He says all the boat officials, who weigh the fish, occasionally sitting nearly knee to knee with competitors, voted in favor of going forward.

So competitors arrived last Tuesday for the group meeting and practice days, ate in local restaurants and, in most cases, stayed in shared rental houses with other anglers (less perfect for social distancing). Precautions included boats launching from different docks, later meetings held via text message, and the cancellation of all public-facing fan events. Still, Mark Daniels Jr., the leader heading into Wednesday, estimated that “75 to 100” fans were showing up daily to boat dockings. “In some cases many more than that,” Daniels says by phone Tuesday. “We hang out after and sign autographs and take pictures. It’s pretty hands-on interactions. People want to come up and shake hands and say, ‘great tournament yesterday.’ You don’t want to disappoint them, so we totally interact with them.” (Says Wilburn: “We can’t stop a fan if they come out to a dock.”)

For the most part, the reality of the national crisis didn’t appear to have caught on at the lake yet. “Of course everybody’s talking about it, the latest and not greatest thing,“ Daniels says. “But in the fishing world, we kind of disconnect from a lot of the hoopla taking place in the world on a daily basis.”

Skeet Reese, one of the sport’s most successful anglers, fished Monday but missed the cut by one spot. When we spoke by phone Tuesday morning, Reese was at DFW, noticing the masks on passengers and waiting to fly home (he lives in Auburn, Calif., outside Sacramento). When I told him that in the Bay Area, where I live, we were now sheltering in place, he expressed surprise. “Really? Oh my gosh. That’s what I was told last night but I didn’t know if it was fake news or real news.”

Reese says that competitors were divided. “If I talked to 50 people this week, it probably split the middle. Half were like, ‘I’m not going to stop livin’ and do what I do, I’m young and healthy enough that if I get it, I won’t be affected.’ The other half is worried about getting sick or family getting sick.”

For his part, Reese sounded eager to get home. He has a 17- and a 13-year-old daughter. The older one is “completely devastated” to miss prom and her senior soccer showcase. He feels for her. “But if that’s what it takes, then let’s do it.”

As a nation tries to figure out social distancing en masse, it’s hard to know what guidelines to follow. What is safe? What’s dangerous? Is fishing? Is running?

Jeffrey Martin is professor and chief of the Division of Clinical Epidemiology and Health Services Research at UCSF. He says most everything is situation-dependent right now. “I think you do have to remember how this virus is transmitted,” he says by phone. “It is transmitted from close contact between humans or an infected human touching a surface and someone else coming by and touching that surface. If you’re talking about bass fishermen who are independently in boats, can they get to their locations by being careful and not coming into contact with each other and can the crew do the same?

“It isn’t as if going outside and breathing the air is going to get you infected,” he continues. “We just have to be thinking about all our actions and thinking, ‘Is anything I’m doing putting anyone else at risk?’”

Martin suggests a guideline: If it seems like a bad idea, it probably is. The virus can travel on the surface of a basketball, for example, even if you’re just shooting around. Same for a tennis ball, which likely will touch only two players’ hands. “That’s less risk than basketball, which is less than football, where people are rubbing up against each other as a nature of definition,” Martin says. “All of it is a matter of degree. If you can reduce your risk a little bit, you’ll be helping society.”

So does MLF help society? It no doubt provides comfort, or at least escape, to fans. And casting by yourself in a boat is not inherently a problem. But spending hours in close quarters with officials and camera operators riding along, plus traveling, going out for meals, shaking hands with fans, and staying in group houses with competitors—those seem like bad ideas.

Spectator sports are, by nature, a diversion for all but those who play them.

For now, the anglers of Major League Fishing are trying to stay in the moment, however fleeting it may be. Daniels says his plan for Wednesday was to wake early, drink coffee and eat his customary prefishing banana before going over his scouting for the lake. Then he aimed to lock in. “Go big home or go home is the attitude,” he says. “It’s all about casting, casting and trying to cover water and catching as many bass as I can. It sounds simple, but that’s the best I can explain it.”

In the end, Daniels came in third, after DeFoe surged at the end. When the clock hit zero, a roar erupted from the sizable crowd on shore (visible via livestream). DeFoe, speaking to the camera, talked about his gear, the tournament format, the lake, and said “Praise the Lord. Thank you, Jesus.” He did not mention COVID-19, though he could have been speaking of it when he said of his victory, “It still ain’t even real. … It won’t be real for a while.”

Now the competitors head home, likely to family and towns that have changed drastically within the last nine days. Meanwhile, Wilburn says the MLF will decide within the next week whether to hold its next tournament, slated to begin April 3 in Raleigh, North Carolina. He is more familiar than most with the situation. His daughter recently returned from Spain; Wilburn says the family is observing a self-quarantine in their Tulsa, Okla., home for 14 days. “Things are changing so dramatically every day,” Wilburn says. “Every day gets more serious, so health is our No. 1 priority.” Then again, he says he’s received “only enthusiastic responses” from businesses and competitors and, besides, viewership is up; a whole new fan base awaits.

”I have heard that one of our sponsors is announcing a campaign,” Wilburn says. “It’s hashtag FishThroughIt.”