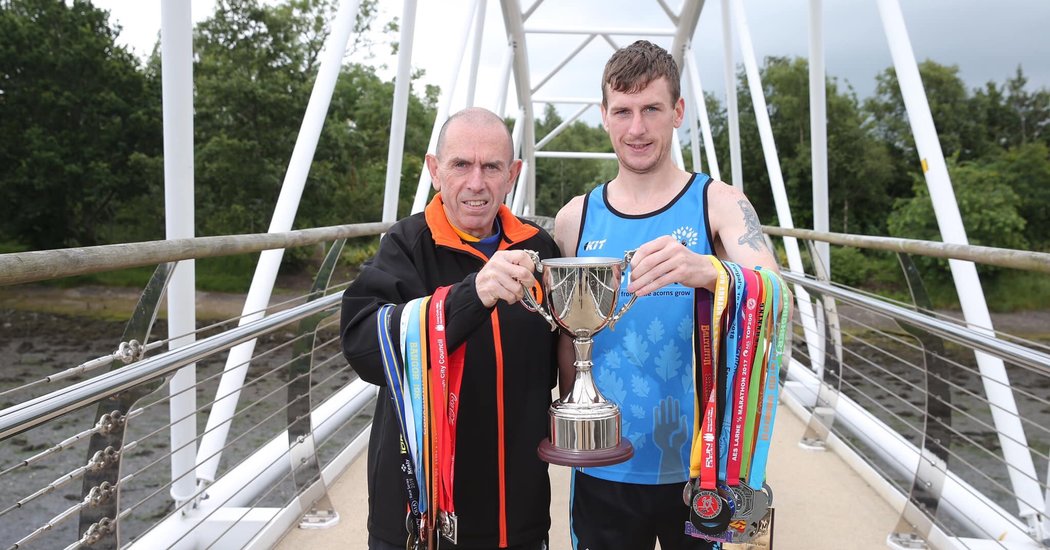 To run a Guinness world-record marathon, it may help to have a large aerobic capacity, plenty of brief tuneup races, a uniform race pace and, not least, a family member chasing you from behind or dusting you from up ahead, according to an inspiring new study of an Irish father and son who recently set a world record for fastest combined parent-child marathon finish.

The study anatomized the father’s and son’s divergent physiologies and athletic histories, raising interesting questions about the roles of genetics, environment, training and luck in marathon success and underscoring that one person’s route to a fast finish could be quite different than another’s, even if that person is your parent.

Now is, of course, a discombobulating moment to be writing about marathons. Until last week, many of us who run were ramping up our training in anticipation of upcoming spring races. Then, most events, including the London, Boston and Big Sur marathons, were postponed or canceled because of concerns about the coronavirus pandemic.

But where possible, many of us are continuing to head outdoors to run, and to burn off excess energy — while maintaining appropriate social distancing. As we refine our goals and training in anticipation of the time when races will return, the new study, which was published in February in the Journal of Applied Physiology, could prove useful and pertinent as science and story. Its protagonists, Tommy and Eoin Hughes, are so aspirational. And so fast.

The new study in fact grew out an earlier scientific examination of the unexpected prowess of Tommy Hughes, an electrician from Northern Ireland, who set a single-age world record last year when he turned 59 and ran a scorching 2:30:15 marathon. That finish caught the attention of researchers at the Inserm research organization in France and other institutions who study elite athletes. They invited Mr. Hughes to their lab to delve into what had allowed him to be so swift.

Mr. Hughes owned, they found, an impressive, if front-loaded running résumé. As a young man, he had represented Northern Ireland in an Olympics marathon, but then quit running for 16 years to work and raise a family. After that hiatus, he nonchalantly signed up for the 2008 Belfast marathon and, with little training, finished sixth. From there, his speed and results only improved.

An almost preternatural aerobic capacity most likely aided him, the researchers found when they tested his physiology. At 59, his capacity remained exceptionally high for his age, despite years without running, which should have reduced his endurance more permanently than it had. His current approach to training was probably crucial, the scientists decided. Uncoached, he logged at least 100 weekly miles, running twice a day and entering local 5-kilometer and 10-kilometer races for speed work.

During this testing, Mr. Hughes mentioned that he and his 34-year-old son Eoin were planning to enter the Frankfurt marathon, aiming to break the Guinness world record for fastest parent-child marathon finish, which stood then at 5:02:12. Eoin, his father told them, had not begun running until he turned 30. Now, the two of them often trained and competed together locally. This would be Eoin’s first marathon.

The researchers quickly realized that the father and son represented a remarkable test case of how different trajectories and biologies affect athletic success, with one runner beginning young, stopping and returning, and the other not starting until adulthood. Plus, they were related.

So, they invited the Hugheses to the lab and completed more tests, including measuring Eoin’s maximum aerobic capacity, which was similar to his father’s, and tracking each man’s oxygen uptake at various race paces, a number that provided the researchers with detailed data on how hard they were straining.

Then they waited for the marathon. It was a success, in that the Hugheses broke the old record by more than two minutes. But the father’s and son’s results diverged. Tommy outdistanced his son by almost four minutes, with his pace hardly varying from start to finish. Eoin, on the other hand, sped at the start then faded, finishing the second half of the race about 6 percent slower than the first 13 miles.

Over all, the two men’s results have lessons for anyone planning a future marathon. They tell us, for one thing, that it may be advisable to choose your parents well.

“I believe there is a genetic component, for sure,” says Romuald Lepers, a researcher affiliated with Inserm and the University of Burgundy who led the new study.

But even for those without a family history of Olympic qualification, focusing on abundant mileage, frequent 5Ks, and an ability and willingness to reach and remain at a pace that feels, frankly, unpleasant are probably key.

Experience helps, too. “It is very difficult to pace optimally during a first marathon,” Dr. Lepers says.

So, if a future race will be your first, consider bungee-ing yourself virtually to an older or more seasoned runner, even if that racer is your dad — or sister, mother, neighbor or spouse.

In fact, the primary takeaway of the study may be that training and competing with someone we love might keep us active in the months ahead.

“Having a common goal such as finishing a marathon together and sharing in the training could be very motivating,” Dr. Lepers says.

The Hugheses would agree. While they had hoped to break their own world record during this year’s London Marathon in April, Tommy Hughes told me, with the race postponed until October, they will run together until then.