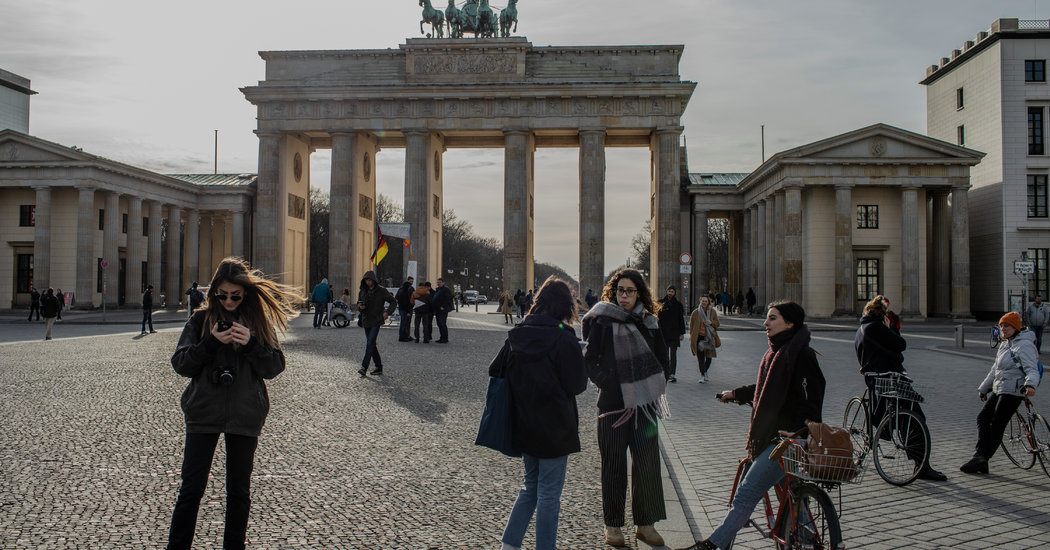 BERLIN — When the Austrian Parliament announced severe restrictions on movement on Sunday, two young Austrian roommates rushed to two supermarkets and a pharmacy before the rules came into force.

Andreas Bencic and Thomas Christl, both 25, weren’t stocking their own larder. Instead, they posted handmade signs outside each shop, each an offer to help the elderly or the infirm with their shopping during the coronavirus shutdown.

“You sit at home, you’re bored, you see the whole world is going nuts,” said Mr. Bencic, a student at the Vienna University of Economics and Business. “We thought it was a nice thing to do, just to protect the older generation.”

The early days of the coronavirus shutdown have sometimes been interpreted through the prism of intergenerational tension: The young, seemingly less at risk to the virus, party on as the elderly retreat into terrifying isolation.

In Berlin on Monday morning, 36 hours after the city shut its nightclubs, a group of youngsters spilled noisily into a residential street after an all-night house party, oblivious to older neighbors hurrying past with their shopping.

But as Mr. Bencic’s gesture showed, there is a complexity to generational responses to the coronavirus, not least in Europe, where the disease appears to have spread sooner and faster. While some young people have blithely ignored the warnings, others have heeded calls for cross-generational solidarity.

Across Germany, schoolchildren and university students from Fridays for Future — a youth-led climate movement that is often framed in generational terms — quickly canceled both their weekly public protests and their planning meetings.

For Quang Paasch, a 19-year-old spokesman for the group in Berlin, there was an irony in how governments and communities have responded radically to a coronavirus crisis that disproportionately affects the old — while consistently avoiding similarly radical responses to a climate crisis that disproportionately affects the young.

“It’s kind of a generational conflict,” Mr. Paasch added. The climate crisis is a crisis of both the future and “the now,” he said. “The corona crisis is about just now.”

But younger activists like Mr. Paasch also found something hopeful in the drastic actions being taken by governments across Europe — because they might normalize the concept of large-scale state intervention.

“All the politicians in the last years have said: Oh, it’s not possible to act,” Mr. Paasch said. “But now we see it is possible.”

Across Europe, leaders have suddenly enacted policies that in ordinary times would only be contemplated by the most radical of leftists.

In Italy, the government has suspended mortgage payments to soften the crisis’s effect on homeowners. In Denmark, the government will subsidize 75 percent of company payrolls, to persuade firms not to fire their staff. In France, the state will delay taxes for stricken companies and guarantee more than $300 billion of corporate debt.

And in the United States, Mitt Romney, the Republican senator from Utah, joined left-wing calls to pay every individual a basic income, regardless of whether they were employed.

On the environmental front, the crisis has also drastically reduced pollution in northern Italy and China. Data released by the European Space Agency and NASA showed that restrictions on traffic and air travel had significantly slashed pollutants in the skies above Milan — and by as much as 30 percent in Wuhan, the center of the pandemic in China.

“In the short term, it will be very bad,” said Srecko Horvat, the co-founder of a new Pan-European political party, Democracy in Europe Movement 2025. “But, long term, it might create some radical effect — a radical rethink of how our societies work, the necessity of public health care, a necessity of slowness.”

Part of this reordering might include greater solidarity between generations, Mr. Horvat hoped, citing gestures of kindness like Mr. Bencic’s and the number of spontaneous phone calls he had received from long-lost friends since the start of the crisis.

“The whole term ‘social distancing’ is wrong,” he said. “It’s physical distancing — but people are becoming closer socially and emotionally and mentally.”

In recent decades, the economic interests of older and younger generations diverged, said Keir Milburn, the author of “Generation Left,” a book about generational divides in Western politics.

But the urgency of the coronavirus crisis might force generations to find a common economic cause, since it has suddenly elevated the social value placed by older generations on the precarious, low-wage work carried out by younger people in supermarkets, cleaning, transport and food delivery.

“There’s been a disconnect which has now been remedied,” said Dr. Milburn, a politics lecturer at the University of Leicester in Britain. “As soon as the crisis strikes, you immediately see that the autonomy of someone who is a bit older and wealthier rests on hidden work.”

But the aftermath of the 2008 economic crash showed the political pendulum could also swing in a completely unexpected direction, Dr. Milburn said. Twelve years ago, there was initially considerable political momentum in the West behind the idea of huge state-led economic intervention as a solution to the crisis — but it was soon usurped by support for the reduction of state expenditure and debt.

“In November and December 2008,” said Dr. Milburn, “nobody was predicting what would dominate politics around the world was austerity.”

There are also fears that restrictions on human movement in force across Europe will eventually numb people to authoritarian actions in a post-pandemic context.

“It’s complicated for us who are critical of governments, because you need full restrictions” to stop the transmission of the disease, said Mr. Horvat. But “what kind of effect will all this have on the future of democracy?”