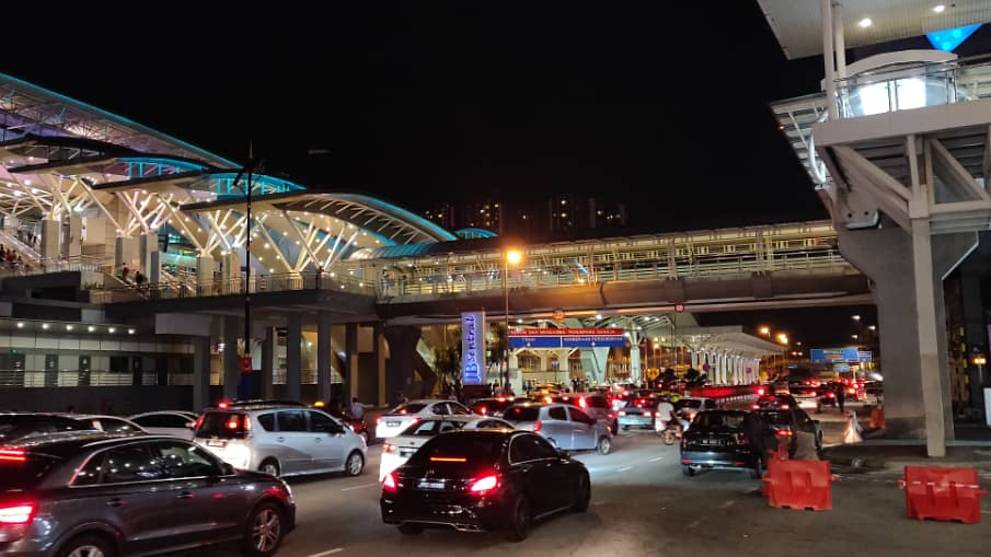 JOHOR BAHRU: As the clock struck midnight on Tuesday (Mar 17), the cars stuck in the queue just outside the Johor Bahru Customs, Immigration and Quarantine (CIQ) complex broke into an orchestra of honking.

The drivers ran out of patience, as Malaysia’s COVID-19 restricted movement order, which bars citizens from leaving the country, came into effect for the next two weeks.

The lines of cars at CIQ were unusually long for the whole of Tuesday, with Malaysians working and studying in Singapore eager to cross the Causeway into Singapore.

Mr Johari Abdullah, who runs a taxi ticketing kiosk opposite JB Sentral, along Jalan Jim Quee and opposite the CIQ complex, said the traffic had been steadily building up since morning.

“Traffic has been heavy since 11am. But after 3pm, it just became terrible. This is how it’s been this whole night till now. It takes nearly 60 minutes just to move about 1km from R&F Mall to this JB Sentral point,” he said.

While there, CNA observed a taxi taking more than 40 minutes to inch 50m before it could escape the line to arrive at the taxi point.

Fortunately, for the cars already in the line, they were allowed to enter the CIQ complex to complete the immigration process and head into Singapore.

In less than 30 minutes after midnight, the traffic tapered off and the CIQ building became quiet and deserted.

Despite it being past midnight, a Singaporean family of four were seen heading hurriedly towards the escalators up the overpass linking JB Sentral and the Sultan Iskandar Building.

Mr Hakim Abu Bakar said he and his wife and their two children wanted to try their luck to cross the Causeway. They most likely would have to follow a Stay-Home Notice as they had missed the Monday 11.59pm deadline to return to Singapore.

“We were up in Kuala Lumpur for a holiday, and we had tried flying down to Senai airport on Sunday, but there were no flights. Then we heard about the border closing.”

“So I hired a private car to take us to Johor Bahru, then there’s this jam. It’s after midnight, we’re going to try and leave Malaysia, I think we still can,” he said.

And what if they could not leave the country? “Then we’ll have to find a place to stay here,” Mr Hakim said.

READ: Short-term housing options available for some workers who commute between Singapore and Malaysia frequently

At the JB Sentral pick-up point, several Malaysians who had chosen to return from Singapore and spend the 14 days of restricted movement in Malaysia were waiting for cabs back to their homes in and around Johor Bahru.

Mdm Rani Xavier, who was with her daughter Ms Lavania Xavier, said with the border sealed, prices of daily goods might still rise in Singapore despite assurances that there were sufficient stocks.

“We chose to come back, because we anticipate prices for things might go up during these two weeks,” Mdm Rani said, adding that it would be better for them to wait out the two weeks in Malaysia.

SCARCITY OF CABS ON TUESDAY DUE TO TRAFFIC CONGESTION

To their dismay, they queued for hours but very few taxis came by, due to the high demand and the slow traffic heading into Singapore.

Malaysian Freda Mary Benjamin, who lives in Singapore with her Singaporean children on a long-term social visit pass, said only two taxis showed up during her three-hour wait. She was in Johor Bahru for a short holiday.

“When the announcement dropped, my son quickly called me and alerted me of the deadline. He did not want me stranded here because I have no one, and no place to live here for two weeks,” Mdm Freda said.

Also in the line was a Singaporean student, Amirul Nabil, 17, who said he needed to get back to Singapore as he was joining a new school soon.

Both Mdm Freda and Amirul said if there were no taxis, they would hail a ride to the JB CIQ complex, and then walk over to Woodlands.

Taxi driver Mohd Radzif Mohd Tahir, 58 who was helping out at the Singapore-Johor Bahru taxi counter, explained that the shortage of taxis was due to the extremely heavy traffic on the Causeway.

“Some friends told me that it’s about 90 minutes to cross the Causeway. And to get to Rochor Road, it takes about three to four hours,” Mr Mohd Radzif said.

“Many taxi drivers are also being cautious because they don’t want to get caught out when the order comes into enforcement at midnight,”

Mr Ahmad Shah Mohamad, 39, who sells snacks and drinks at Larkin Sentral, said he and other traders in the station were ordered to close in accordance with the controlled movement order.

“For me, it’s alright, I’ve some savings to tide me over, even though this is a new situation. There has never been such drastic action taken, not even during the SARS epidemic,” he said.

“I am just worried for my stock, especially those with expiry dates; but for those self-employed people like the drivers and other part-time workers, it will be very tough.”