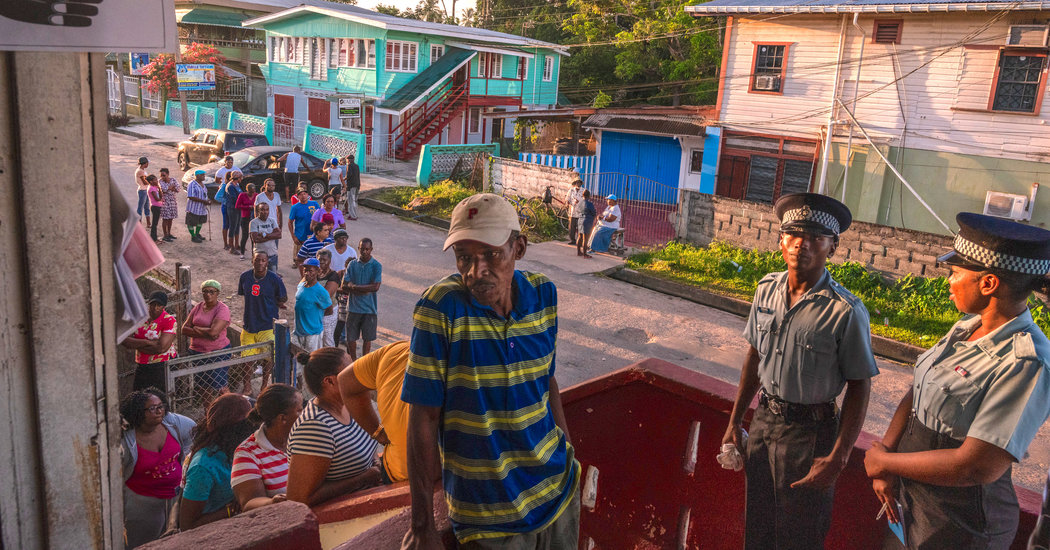 They came to depend on each other after a series of extraordinary oil discoveries off Guyana’s coast transformed the small South American country’s fortunes and boosted the oil company’s assets at a time when its fortunes were flagging elsewhere.

But just as Exxon began to sell the first cargoes of Guyanese oil earlier this year, the company found its operations at the center of the country’s biggest political crisis in decades.

After a bitterly contested — and still unresolved — election on March 2, many Guyanese are questioning whether the oil giant’s deal with their country, struck under the current government, is fair, and whether the oil proceeds will be equitably shared in a society sharply divided along ethnic lines.

Since then, a colossal oil market slump complicated the country’s outlook further.

“Our people have to feel they are a part of it,” said Newell Dennison, head of Guyana’s oil exploration regulator, about the oil bonanza. “There are fundamental issues about the country’s direction that ought to be addressed at the national level. I’m concerned it’s not happening as it should.”

Since Exxon made an initial discovery of crude about 120 miles off the Guyanese coast in 2015, it launched one of the biggest underwater geological surveys in the industry’s history — and landed a remarkable string of 16 world-class discoveries. Last year alone, Exxon took credit for five of the six biggest oil finds, all in Guyanese waters.

A consortium led by Exxon plans to produce 750,000 barrels a day by 2025 from its Guyanese fields — an enormous addition to its current global production of 4 million barrels a day.

The bonanza came in good time for the company. Even before the collapse of crude prices this month, Exxon had been forced to write off billions of dollars of investment in Canadian oil sands and sell assets in the North Sea in part to pay investor dividends.

“It is a huge resource that keeps getting bigger,” said Jennifer C. Rowland, a senior analyst at the Edward Jones investment company, of Exxon’s Guyana fields. “It is a critical part of their portfolio.”

Exxon executives insist that their discoveries will improve life for Guyana’s 750,000 residents.

“There are those who are unsure, or even skeptical about the oil industry or what it brings to Guyana,” said Hunter Farris, an Exxon senior vice president, at a recent energy conference in the capital, Georgetown. “We are here to partner with Guyana and its people.”

Some of the benefits of Exxon’s presence are already being felt in the country.

Exxon has contracted about 1,900 Guyanese, and paid $220 million to hundreds of local contractors there since 2015, according to company statements. That is more than two-thirds of all salaries paid by Guyana’s government last year, according to the International Monetary Fund.

By 2024, oil is expected to constitute about 40 percent of the country’s gross domestic product, according to the I.M.F., with production growing for years to come.

The offshore drilling also has spurred a flurry of onshore construction as local entrepreneurs jostle to provide the oil industry with housing, warehouses and entertainment.

But the discoveries have also exacerbated the country’s entrenched ethnic divisions and raised substantial questions about whether Guyana is prepared to navigate the rocky transition from an economic backwater reliant on bauxite mining and sugar into a top oil producer, all while safeguarding the welfare of its people.

“We’ve got a lot of soul searching as a country to do,” said Nicholas Deygoo, head of Georgetown’s chamber of commerce. “We’ve read about so many oil countries where it’s gone wrong. Everyone is being very cynical.”

The first evidence of strain may be the March elections. The vote results will determine which of Guyana’s two main political parties get to control the country — and its looming oil revenue.

The outcome remains undecided, even after the nation’s top judge ordered electoral officials to conduct a partial recount. Distrust is higher than ever between the two parties, which are closely aligned with the country’s two dominant ethnic groups, the Afro-Guyanese and those of Indian descent,

And they are disputing not only the leadership of the country at a crucial moment, but the terms of Guyana’s deal with Exxon.

The main opposition party is accusing the government of President David E. Granger of handing over the nation’s wealth to the company and has promised to investigate its production contract if elected.

Opposition party suspicions have added to the growing number of voices within Guyana and abroad who worry that Exxon’s corporate muscle is overwhelming the country’s small and inexperienced government.

Guyana had “no economic model” for negotiating with the company, said Jan Mangal, who was an energy adviser to Mr. Granger in 2017 and 2018, after the contract was signed.

“Ministers didn’t ask for advice from oil and gas experts,” he said. “Exxon will take what it can get, everything it can get. And in terms of Guyana, the people are only beginning to realize what they have lost.”

The country’s oil exploration regulator, which is responsible for dealing with a flurry of new drilling activity, has about 10 dedicated officials. Another government agency, the Environmental Advisory Board, which approved hundreds of pages of Exxon’s technical drilling proposals, was hastily assembled and didn’t include anyone with oil and gas experience.

In June 2016, a year after the initial discovery, the company and Guyana renegotiated a contract on terms highly favorable for Exxon, according to industry analysts and transparency groups.

Just three days after the signing, Exxon announced yet another major discovery.

A London law firm hired by the government to review the contract procedure, Clyde & Co., concluded that Exxon pushed Guyana’s officials to sign the new deal before announcing drilling results “because knowledge of a ‘world class’ discovery could have altered the government’s negotiating position.”

A separate study of the contract, commissioned by Global Witness, a London-based transparency group, found that Guyana could lose substantial annual revenue because it agreed to receive a below-average share of oil production.

“This is not a relationship of equal partners,” said Floyd Haynes, a Guyanese-born finance professor and consultant to the government.

Exxon and some industry consultants have defended the contract, saying the terms were normal for countries without existing oil production, because they pose a higher exploration risk.

For its part, Guyana’s government said it rushed the contract to use Exxon and CNOOC, its powerful state-owned Chinese partner, as protection against the naval threats of neighboring Venezuela, which claims much of the country’s waters as its own.

Exxon’s influence has already begun to penetrate Guyana’s society and economy, shaping the country in the process.

In just over a year, the company’s supply port has blossomed into Guyana’s biggest industrial park. Abandoned sugar fields next to the airport that ferries Exxon’s workers to rigs will soon become Guyana’s biggest residential construction site, aimed at the foreign oil workers.

Exxon’s environmental risk maps and its geological databases are used as references by the government agencies who are meant to regulate it. The public talks on Guyana’s future as an oil nation are sponsored by Exxon.

In 2018, Exxon said it had donated $10 million to a local university and an environmental nonprofit to promote sustainable employment and conservation.

Months later, the recipients hosted town-hall meetings across the country to debate “the meaning of a green economy,” according to the website of the organizer, Conservation International.

The meetings did not discuss the impact of fossil fuels on Guyana’s fragile environment or on its population.

“We’re excited about oil, but it can’t be just sadness that comes out of it,” said Danny Felix, a fisherman from the outskirts of Georgetown.

Anatoly Kurmanaev reported from Georgetown, and Clifford Krauss from Houston.