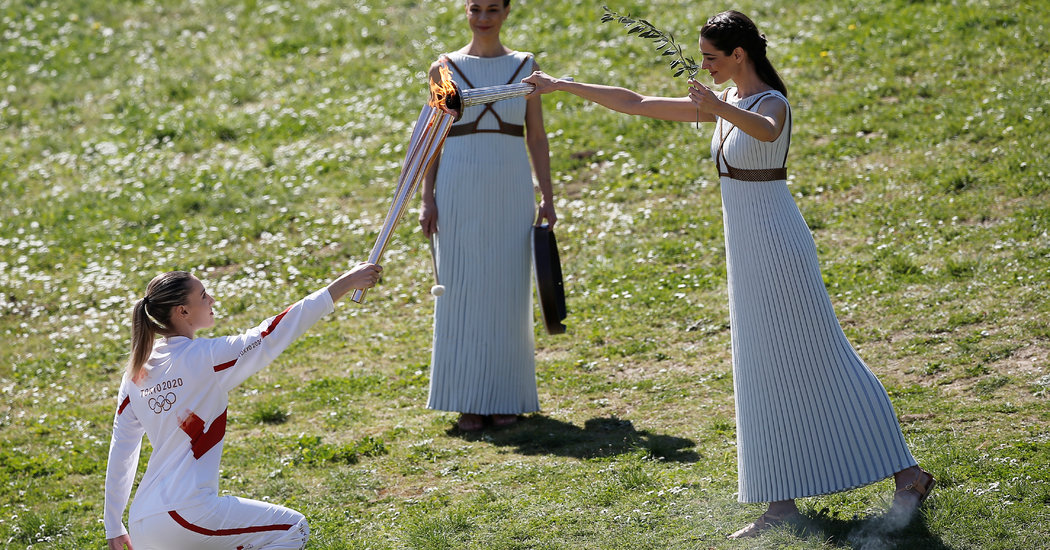 Even as the coronavirus spreads across the world, overwhelming health care systems and cratering national economies, the International Olympic Committee on Tuesday doubled down on its commitment hold the 2020 Games in Tokyo this summer, stunning athletes and other stakeholders who had been preparing for a postponement.

Shortly after the governing bodies for European and South American soccer announced they would postpone their continental soccer championship one year, to the summer of 2021, Thomas Bach, the president of the International Olympic Committee, said the organization remained focus on holding the Games in Tokyo in July.

“The I.O.C. remains fully committed to the Olympic Games Tokyo 2020, and with more than four months to go before the Games there is no need for any drastic decisions at this stage,” Bach said in a statement released just before a teleconference with representatives from national Olympic committees. “Any speculation at this moment would be counterproductive. The I.O.C. encourages all athletes to continue to prepare for the Olympic Games Tokyo 2020 as best they can.”

The statement went against both the growing global movement to cease business as usual and to limit social contact for weeks or even months, and the cascade of cancellations and postponements that have continue to upend the sports schedule.

It was also revealed on Tuesday that Kozo Tashima, the deputy chief of the Japanese Olympic Committee, had contracted the coronavirus.

On Twitter, Hayley Wickenheiser, a Canadian hockey player and a member of the I.O.C.’s athletes commission, said the organization made the wrong call. “I think the I.O.C. insisting this will move ahead, with such conviction, is insensitive to humanity,” Wickenheiser wrote.

Dave Marsh, an elite swim coach for several Olympic hopefuls based in San Diego, had just wrapped up morning training with his swimmers and was preparing for an announcement of a delay when he learned the I.O.C. was not wavering.

“If things don’t change dramatically, I don’t see how they don’t change the schedule,” Marsh said. “Let’s just do it one year later. The sooner we make that kind of decision the better.”

For Marsh and so many other coaches and athletes, coronavirus has crushed regular training plans. The two 50-meter pools where Marsh’s swimmers train are closed. He said a friend has a two-lane, 20-yard pool with starting blocks in his backyard, but that is hardly suitable for the high-intensity training of an Olympic swimmer.

He told his swimmers Tuesday to get a wet suit and plan on having training sessions in the city’s Mission Bay or in the ocean off La Jolla, despite the leopard sharks that are there. “They aren’t too dangerous,” Marsh said.

In his statement, Bach insisted that the efforts to contain coronavirus would allow for the Olympics to take place in July.

He cited Japanese Prime Minister Shinzo Abe’s comments after his call with G-7 leaders Monday, after which Mr. Abe said, “I want to hold the Olympics and Paralympics perfectly, as proof that the human race will conquer the new coronavirus, and I gained support for that from the G-7 leaders.”

Abe did not elaborate on whether holding the Games “perfectly” would necessitate postponing them.

Athletes across Italy, Spain and much of France are largely locked down. In the United States, athletes in every sport are scrambling for training spaces, as facilities are ordered closed. The United States Olympic and Paralympic Committee is not letting any new athletes come to its training center in Colorado Springs, fearing they might infect the roughly 200 athletes who are there now.

Also, the I.O.C. and the international sports federations that run the competitions are seeking to manage the final qualification process that determines who makes the Games. Just 57 percent of the Olympic spots have been secured by athletes.

Even if federations are able to reschedule competitions that have been canceled, it’s not clear that athletes from every country will be able to participate because of their exposure to the coronavirus. That could force the federations and national Olympic Committees to use current rankings to select Olympians, a system that might have eliminated someone like Michael Phelps from making the Games four years ago in Rio de Janeiro. Phelps was coming out of retirement and might not have qualified for the United States or for certain events he won at the 2016 Games had he not been able to participate in a trials competition.

Bach gave the federations until the beginning of April to come up with new qualification standards.

Athletes have been complaining for weeks about a lack of communication from both the I.O.C. and the federations.

“A lot of athletes are under stress and uncertainty,” said Han Xiao, the chairman of the U.S.O.P.C.’s Athlete Advisory Council. “What would help is if the I.O.C. were a little more transparent about its plans.”

Xiao said that while American Olympians understood that the decision to cancel or postpone the Games could not be taken lightly, the I.O.C. could ease some anxiety by at least providing some sort of decision-making timeline or deadline, so athletes have a better idea of what to expect in the coming weeks and months.

Some of the uncertainty has been unavoidable as researchers struggle to understand the novel virus. Just days ago, the Centers for Disease Control was discouraging events with more than 250 people. On Monday, that number dropped to 10. Bach said that moving forward, the Olympic organizations would share information as it came to them and directed athletes to a website for updates, athlete365.

In a letter posted on the site, Bach left little doubt that he remained determined to use the Olympics to signify a celebration of the end of the coronavirus crisis.

“I hope that with all this support you can fully concentrate on your Olympic preparations,” Bach wrote. “Please go ahead with ‘full steam.’ Then we, the Olympic community, can once more unite the whole world in a peaceful competition.”