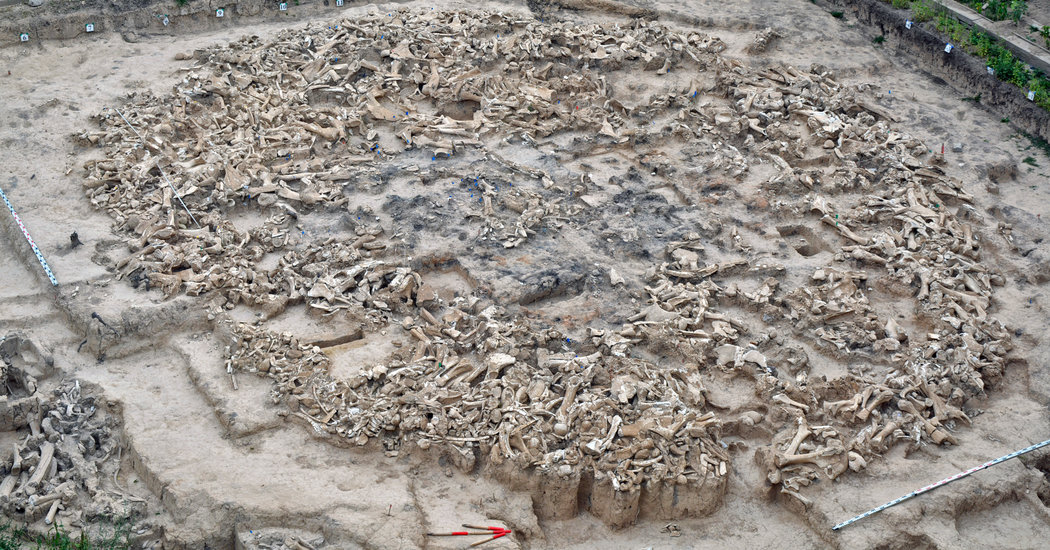 Ice Age hunter-gatherers, foraging the bone-chilling, unforgiving steppes of what today is Russia, somehow completed a remarkable construction project: a 40-foot-wide, circular structure made from the skulls, skeletons and tusks of more than 60 woolly mammoths. The reason remains a mystery to archaeologists.

“The sheer number of bones that our Paleolithic ancestors had sourced from somewhere and brought to this particular location to build this monument is really quite staggering,” said Alexander Pryor, an archaeologist at the University of Exeter in England. “It does boggle my mind.”

Alexander Dudin, a researcher from the Kostenki Museum-Preserve, and a team of scientists began excavating the 25,000-year-old mammoth-bone circle in 2014 at a site called Kostenki 11, which is 300 miles south of Moscow. It is the third structure uncovered at the site. The discovery was published Monday in the journal Antiquity.

Archaeologists have unearthed about 70 mammoth-bone structures across Eastern Europe. But this one is the oldest on the Russian plain thought to be made by modern humans. Most of the previously identified structures were small, leading researchers to conclude they were most likely used as winter dwellings on a nearly treeless landscape.

But the researchers said this circle was too large for a roof, which might suggest it was used for a different purpose.

“There are more than 60 mammoths in this one structure” said David Beresford-Jones, an environmental archaeologist at the University of Cambridge and an author on the paper. He added, “It doesn’t make much sense, really, as a house.”

The team suggested that the hunter-gatherers instead may have butchered massive mammoth carcasses at the site and then stored the meat and fat in nearby permafrost as if in an ancient refrigerator.

Dr. Pryor arrived at Kostenki 11 in 2015 and quickly went shoeless, tiptoeing so that he wouldn’t crush any of the hundreds of mammoth bones scattered around the site. The ring, which also included ribs, jaws and leg bones, had probably been piled 20 inches high before collapsing thousands of years ago, he said.

The team collected sediment samples from inside the bone circle and from three large pits located outside.

Through further processing, they identified more than 400 charcoal pieces, evidence of wood-burning. The charcoal came from conifers such as spruce, larch and pine, suggesting that trees still grew in the harsh, frozen environment. They also radiocarbon-dated the charcoal, which further supported that the site was about 25,000 years old.

They also found burned mammoth bones, which indicated that the Paleolithic people were probably starting fires with wood and then using the beasts’ greasy bones to feed the flames. Bone-fueled fires burn brighter than wood fires, but spread less warmth.

“You won’t produce a nice good fire for roasting your mammoth meat on,” Dr. Beresford-Jones said. But the flames would have allowed the hunter-gatherers to work through the night to hastily strip meat off mammoth bones before hungry wolves and foxes arrived to try to seize the haul.

The team also uncovered plant material similar to what is seen in modern parsnips, carrots and potatoes. This suggested that the Paleolithic people may have supplemented their mammoth meals with vegetable side dishes.

Mietje Germonpré, an archaeozoologist at the Royal Belgian Institute of Natural Sciences in Brussels, and who was not involved in the study, called the paper a “truly unique discovery,” and said its findings were sound.

Paul Pettitt, an archaeologist at Durham University in England, applauded the team for the methods they used to recover ancient charcoal from the dirt. But he said it could not be ruled out that the structure might have been used as a cozy home during the long winters, which could reach minus 4 degrees Fahrenheit.

The team acknowledged that they did not fully solve the mystery of how the mammoth-bone circle was used. They still do not know whether the hunter-gatherers killed or scavenged the beasts, how long the location was used or if it held any ritualistic importance.

“These woolly-mammoth circular structures are really enigmatic, but they are hugely impressive,” Dr. Pryor said. “They speak to a time when our human ancestors were battling against the coldest and harshest and most difficult point of the last glacial cycle in Europe.”