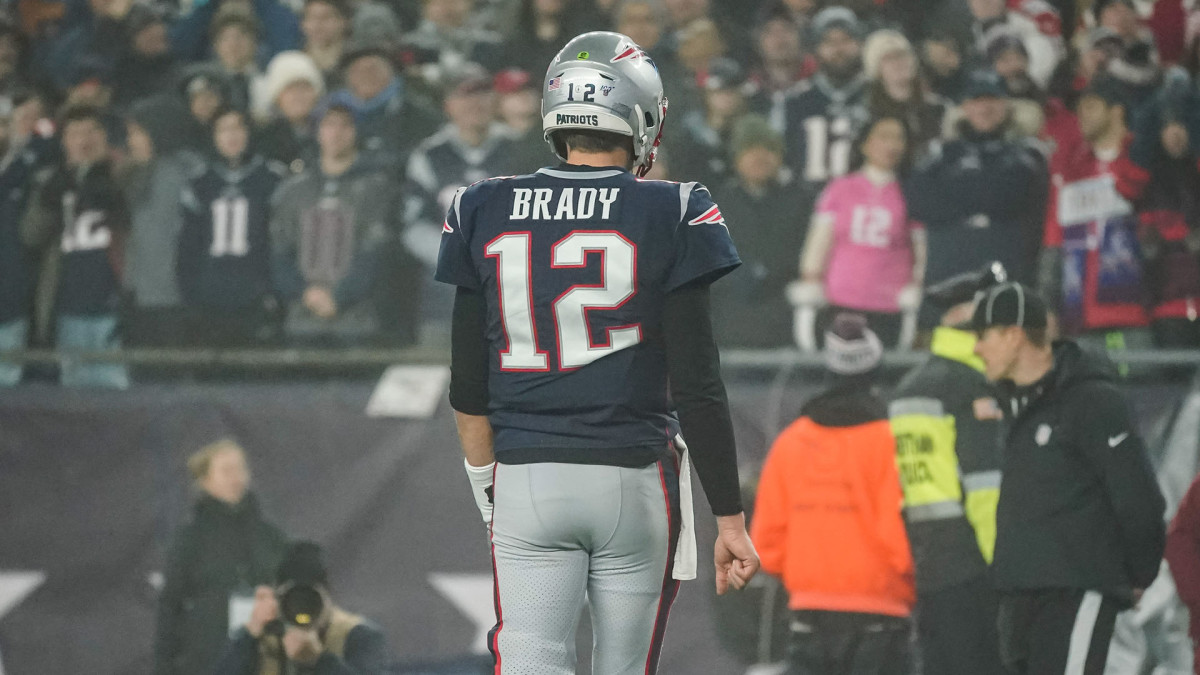 It was so easy to believe in the fairy tale. This wasn’t Tom Brady’s fault. If you paid attention, if your vision was clear and your mind was sober, you understood: Literally nothing that Brady said in the past few months hinted that he would return to New England. There was no “it’s hard to imagine leaving this place” or “I always wanted to be a one-team guy” … it was all just: We’ll see what happens. He said he didn’t know if he would leave. But he was probably pretty sure. He had a lot of time to think about it.

It was others who didn’t believe. They saw that game-ending interception to Tennessee’s Logan Ryan and thought: He can’t go out like that! Not Tom Brady! He’s football’s greatest winner! He has to come back now …

This was silly, a big scoop of pablum that people fed themselves. Of course he can go out like that! Why not? If you were Tom Brady, and you were planning to leave New England, why would you let one pass change your mind?

Gosh, we can be naïve. It’s amazing, when you think about it: The Patriots spent 20 years showing us this is a business—a cold-hearted business—trading their most beloved players right before the rest of the league noticed their decline, dumping Lawyer Milloy, trading Super Bowl MVP Deion Branch rather than overpaying him, dealing Richard Seymour and Randy Moss, benching Super Bowl hero Malcolm Butler in Super Bowl LII, daring free agents to take more money with lesser teams … business, business, business. And in the end, what did we learn? Tom Brady can’t leave the Patriots! His heart is there!

We can be such rubes.

It was all right in front of us. Brady signed a contract that kept the team from putting the franchise tag on him. He put his house in Massachusetts on the market. He did not come close, at any point, to signing an extension with the Patriots. He did not drop hints that the team needed to do this or sign that guy or hit that number. He did what the Patriots have done for two decades: He said very little, stayed patient and calm, maximized his leverage, and got what he wanted.

Why did he want it? That’s a question that people will ask for the next two decades. There will probably be three sides to that story: Brady’s, Bill Belichick’s, and the truth. Belichick, for his part, did what he always does. He talked about Brady conservatively, with the unspoken understanding that while Brady is the most accomplished player in history, the Patriots are not a Hollywood movie. They are the best franchise in the NFL, much bigger than any one player. Even Tom Brady.

There have been rumblings for years that each man wanted to outlast the other, to prove he could do it without the other guy—especially Belichick, the best coach in NFL history, who must know that other coaches whisper that he lucked into the best quarterback ever. Those feelings would only be normal. These are extremely competitive people. If Belichick released a collection of love letters, I must have missed it.

There have been some storybook endings in sports. John Elway. Jerome Bettis. David Robinson. But those are rare for a reason: So much has to align. The player has to be good enough to still win but not so good that he wants to keep playing. The team has to win a championship. And then, when everything is going so well, the player has to be humble enough, or realistic enough, or more focused on other priorities, to walk away.

That does not really describe Brady. He has always sounded like he wanted to play forever (he says he wants to play until he is 45, which is a football player’s equivalent of forever). If he somehow hits 45 and is an MVP candidate, he will probably return at age 46. Belichick, meanwhile, is the roster architect least likely to a) factor in Tom Brady’s star power, and b) pay elite-quarterback money to a player in his mid-40s.

If their relationship deteriorated, or if one or both just thought it was time for a change, that would only be normal. Quarterbacks and coaches coexist in an extremely tense environment with millions of people watching. Those relationships tend not to last forever, even the best ones. Think of how some of the greatest quarterbacks in history ended their careers. Joe Montana, Kansas City Chief. Brett Favre, Minnesota Viking. Johnny Unitas, San Diego Charger. Peyton Manning, Denver Bronco. They were all one-team guys, until they weren’t.

The sentimental pull here came from us—and maybe from Patriots owner Robert Kraft, who was the only real hope that Brady would return. Kraft could have stepped in and tried to bring the sides together, maybe with a contract that Belichick wouldn’t like. But ultimately, the Patriots are wise to trust in Belichick, and Brady has six excellent reasons to believe in himself.

It will be weird to watch Brady in another uniform in September (if there are even games in September). But we’ll get over it. We’re not really going to look back on Brady’s career in New England, which was the best in NFL history, and remember it mostly for that interception against Tennessee. That would be stupid. No matter what Brady does from here—winning one last Super Bowl, like Peyton Manning did, or flaming out like Unitas—we will always remember him as a Patriot, as the quarterback who won more than any other. They can make their business decisions. Our sentiments remain ours, forever.