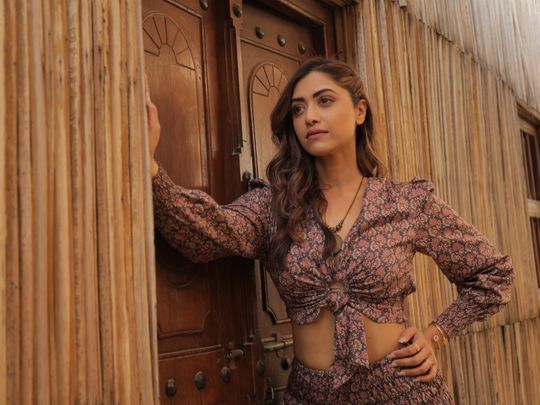 You can’t be too careful in the times of the corona outbreak in the UAE. Or so we learnt yesterday.

What was planned as an exclusive face-to-face interaction with South Indian actress Mamta Mohandas at her suite at a plush hotel in Business Bay on March 17 to discuss her experience of filming in Dubai was swiftly changed into a phone interview to ensure social distancing and safety of the actress as well as the Gulf News crew.

“It was super unfortunate that our plans changed at the last minute today. But we are living in the times of Corona and we have to be very careful in these times … Honestly, we did cancel some of the busy streets that we wanted to shoot in to avoid any possibility of exposure to the virus,” said Mamta Mohandas over the phone. She was merely five kilometres away from Gulf News, but we took a call to be cautious.

Mohandas was filming the music video of ‘Thedal’, a romantic song that chronicles the highs and lows of a couple living in Dubai, for the last three days in the UAE.

The ‘Forensic’ star shot in locations including The Paramount Tower & Hotel Residences, Palazzo Versace at Al Jaddaf, Barsha and areas near Zabeel Park.

“I am basically wiping down any door handle that I touch or any lift button I touch. I am using my elbow and the back of my palm to avoid any exposure … Filming in Dubai has always been fun, but right now we were working during a very sensitive period. Sanitising every surface that you touch and washing our hands thoroughly is all we can do,” said Mohandas.

The award-winning actress, whose credits include Malayalam blockbusters such as ‘Cellulloid’, ‘Passenger’ and ‘Kadha Thudarunnu’, is a cancer survivor. Her battle with Hodgkin Lymphoma (cancer of the lymph nodes) is well documented and she’s the poster child of being fierce in the face of adversity.

“People around me keep telling me that I need to be more careful … I get that and I am not being irresponsible about my safety either,” said Mohandas, who shuttles between Los Angeles and other parts of the globe for her work.

Her UAE-based producer of her recent music video filmed in Dubai, Mini Sarma of 7 Media, was equally particular about the safety of Mohandas and her crew. The music video was directed by Fujaiah-based director Sachin Ramdas.

“We kept our crew during the filming minimal. It was just 25 people who are based in the UAE itself and there was no foreign crew who worked on our music video. Our filming was very smooth and swift. There was no crowd in any of our shots,” said Sarma in a separate interview.

Sarma has been in the business of film production for over a decade and is the line producer of Bollywood blockbusters including Shah Rukh Khan-starrer ‘Happy New Year’ and Akshay Kumar’s ‘Laxxmi Bomb’, both of which were filmed in the UAE. Her crew took all the necessary precautions to ensure a smooth production.

For Mohandas, it wasn’t just her filming that came under the scanner due to the coronavirus pandemic. Her recent thriller ‘Forensic’ starring Tovino Thomas was showing in UAE cinemas until the shutters came down due to the outbreak.

“We had amazing initial collections for ‘Foresnic’. But coronavirus fears and this entire fear of pandemic has affected my Middle East release. But I have no complaints. This situation is a rare one that occurs. When people feel it is safe to return to the movies, we can always reopen our films … It’s unfortunate, but our safety comes first.”