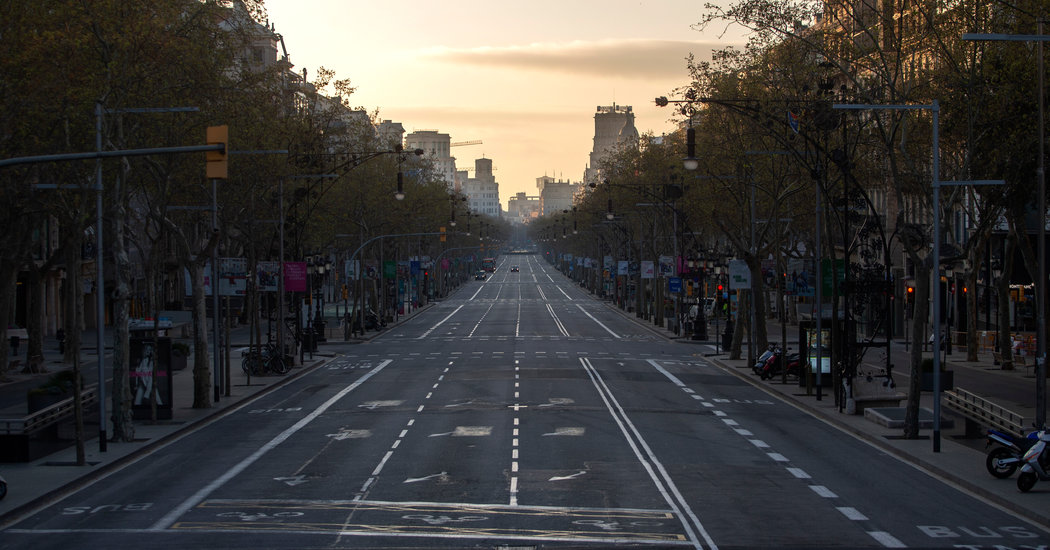 Spain and France are implementing drastic countrywide restrictions, and Germany’s borders were scheduled to close this morning — a day after Italy reported 368 deaths in a single day, the largest daily uptick yet of any country, including China.

Here are the latest updates on the coronavirus pandemic and the markets, a list of travel restrictions, and maps of where the virus has spread.

A semblance of daily life is still ticking along in some places — including Paris, where thousands took part in France’s municipal vote on Sunday. Yet the wave of restrictions taking hold across the continent is also challenging the very idea of a modern Europe without borders, our diplomatic correspondent writes, as invisible walls between neighbors stir fear and fragmentation.

“The crisis of Covid-19 is adding uncertainty to uncertainty, fear upon fear, accelerating a process of anxiety about a world that is moving too fast,” a French political scientist said, referring to existing worries around challenges like terrorism, migration and climate change.

Americans urged to ‘hunker down’

Two days after President Trump declared the coronavirus crisis a national emergency, the Federal Reserve on Sunday slashed interest rates to near zero, as a top health official urged Americans to prepare to “hunker down significantly more than we as a country are doing.”

“For a while, life is not going to be the way it used to be in the United States,” said the official, Dr. Anthony Fauci, the director of the National Institute of Allergy and Infectious Diseases. “We have to just accept that if we want to do what’s best for the American public.”

The hunkering down has already started in New York City, where the nation’s largest school district will be closed starting today. Restaurants, bars and cafes there will be limited to takeout and delivery as of tomorrow morning.

We have live coronavirus news from around the U.S., and an interactive on the workers who face the greatest risks. (And, no, the country is not running out of food.)

By the numbers: The U.S. has more than 2,700 confirmed cases. Gov. Andrew Cuomo of New York State, which has more than 700 cases but only 3,186 intensive-care hospital beds, asked President Trump on Sunday to dispatch the Army Corps of Engineers to help states fight the epidemic and expand hospital capacity.

The Times is providing free access to much of our coronavirus coverage, and our Coronavirus Briefing, like our other newsletters, is free.

We also have tips on cleaning your phone, practicing social distancing and managing your finances during an outbreak. And one of our science reporters answered questions on “The Daily” about how to protect yourself and your loved ones from the pandemic.

Four years ago, President Vladimir Putin started a program to hand out land in remote areas of the Russian Far East in an effort to rescue the area from economic malaise.

But the remote region has long been a magnet for dissenters and idealists, in part because there was “nowhere to exile them to,” as Chekhov once wrote. And, sure enough, the law has attracted some unusually freethinking settlers.

Case in point: Sergei Lunin, above right, an inveterate malcontent and self-declared anarchist who has snapped up a snow-covered plot that is about 3,500 miles east of Moscow. “This will be my own little country and I will be its Putin,” he told our reporter.

Israel: The ex-army chief Benny Gantz is expected to receive the mandate to form a government today from the country’s president, after a slate of predominantly Arab parties joined lawmakers from Jewish ones on Sunday to recommend him over Prime Minister Benjamin Netanyahu.

New Zealand: A year has passed since 51 people died in a terrorist attack on two mosques. We spent several months visiting Zulfirman Syah, a man who dived over his 3-year-old son to save his life, and took bullets in the back and groin.

Snapshot: In one section of the Bronx, a New York City borough, immigrants from the Balkan States and Latin America have slowly replaced the Italian diaspora. But the local “Little Italy,” above, has thrived partly because of its newcomers — not in spite of them.

Listen: Angélique Kidjo, one of Africa’s most respected vocalists, was born in 1960, the same year that her country, Benin, won its independence from France. She spoke to The Times about her musical and cultural upbringing.

Smarter Living: Do you procrastinate? If so, try to manage your negative emotions.

Reporting from a virus hot zone

Karen Weise, a Times technology reporter, chronicled a Seattle-area family adapting to online instruction while their schools are closed to slow coronavirus spread. We talked to her about coping with disruptions.

How did the Peistrup family manage the first day of online school?

They were surprised it went pretty well. Erin Peistrup said she was fortunate because she is a stay-at-home mom. This was a hands-on experience. But the kids found their rhythm during the day. There was time for Erin to coordinate Little League and do other tasks. They also arranged for their children to play with neighbors during lunch and after classes.

How did the school district get ready for home instruction?

The prior week, they let students borrow laptops and internet hot spots, taught them how to set up passwords, and advised families to log in and make sure the passwords worked. They closed down for a day to make sure teachers could use the system, too.

What about families who can’t stay home?

Around the region, people are starting to build informal networks of adult supervision. For parents who can’t be home during the day, I’ve heard stories of people offering to have classmates come to their house for remote learning. And the state has been looking to provide child care for young kids who are truly in need.

How is your family coping with the coronavirus outbreak in the Seattle area?

Life has become much more circumscribed. People aren’t going out much. We are getting used to this being the new normal. I have a toddler and even he picks up on bits of conversation. My family is talking about what happens if our day care closes. Probably some combination of help from neighbors and staggering work shifts. This is what’s potentially coming for people, businesses and schools elsewhere in the country.

Thank you
To Mark Josephson and Eleanor Stanford for the break from the news. Shira Ovide wrote today’s Back Story. You can reach the team at briefing@nytimes.com.

P.S.
• We’re listening to “The Daily.” Our latest episode is a special edition about Tom Hanks; we hope it makes you feel better.
• Here’s today’s Mini Crossword puzzle, and a clue: Cheesy or corny (five letters). You can find all our puzzles here.
• ¿Lees en español? 读中文吗？You or your friends or family can also sign up for a daily morning briefing from The Times in Spanish or Chinese.