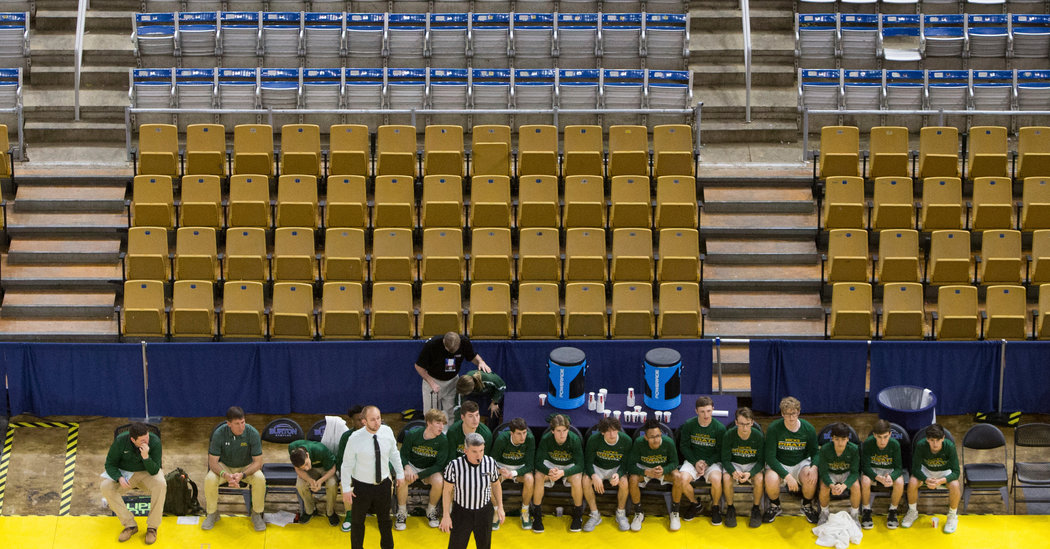 Little League baseball has shut down. Youth lacrosse and soccer clubs have suspended their seasons. Travel teams across all sports have been grounded. The coronavirus pandemic has done what generations of overbearing parents and coaches have failed to do: send millions of boys and girls to the sideline.

The impact of the emerging health crisis was felt immediately at the high school level as state championships in basketball, ice hockey and wrestling were canceled from Montana to New Jersey.

Hearts were broken. Tears were shed.

At the youth level, an indefinite pause in practices, games and tournaments promises to upset the rhythms of countless families and deal a significant blow to the youth sports economy.

The tough decisions were not always welcome. In La Crosse, Wis., the seniors on the Aquinas High School girls’ basketball team were 107-3 through four years heading into this weekend’s championship game. Instead, Wisconsin officials canceled the game and ended the team’s shot at a third straight state title.

“It was a rush of disbelief, disappointment and tears because it’s over, and you’re not getting to finish what you started,” said the team’s coach, Dave Donarski, whose daughter Lexi, an Iowa State recruit and McDonald’s all-American, was supposed to be playing her final high school game.

Donarski said he understood it was the right call, but he was still disappointed for his team.

“Can’t we delay it?” he said. “Can we give it two weeks? I just wished we had pumped the brakes a bit. I think it’s a little bit of mass hysteria.”

Even the most well-informed health professionals felt the hole in their heart at the prospect of missing their daughters and sons compete for who knows how long?

Dr. Andrew Stolbach is an emergency physician and a faculty member at Johns Hopkins University School of Medicine. He also is a wrestling coach for his 12-year-old son and 8-year-old daughter’s club in Baltimore.

“I was disappointed when they canceled our state tournament — there were kids graduating from the program that I’ve known for five years that are not going to get a proper send-off,” Dr. Stolbach said. “But we don’t need organized sports right now when we are trying to slow this virus down. You’re not just bringing kids to games. You are bringing parents and grandparents together. It’s just not necessary to put so many people at risk.”

While many high school students and their parents were left wondering what could have been, club coaches and tournament organizers are fretfully worrying about what may be in the future.

Some eight million children participate in scholastic sports and, by some estimates, some 45 million in youth leagues and clubs. The youth sports economy — a world of private coaching, interstate travel and $350 baseball bats — has ballooned to more than $15 billion annually because of the increasing number of travel teams and regional and national tournaments. The “tourna-cation circuit,” as it is known, has left the nation’s sports mega-complexes empty — along with the adjacent hotels, restaurants and amusement attractions.

U.S.A. Gymnastics canceled a meet over the past weekend that was to bring 1,600 athletes and their families to the LakePoint Sporting Community in Emerson, Ga., one of more than a dozen facilities built around the nation to be like a cruise ship for youth sports. Now, its eight baseball diamonds and dozen basketball courts are idle through March 29 and perhaps longer.

“We are fully booked through mid-August,” said Dean Keener, a LakePoint vice president for business development as well as a former college basketball coach. “I hope everyone gets their seasons back. We’re not going to rush it.”

While the Universal Cheerleaders Association held a truncated version of its International All Star Championship on Saturday at Disney’s ESPN Wide World of Sports Complex in Florida, most high school athletic associations canceled events.

On Thursday, even before Idaho had reported any coronavirus cases, the Idaho High School Activities Association announced that the upcoming state cheer and dance championships would be postponed.

“The scene changed hourly it seemed from Wednesday to the end of the week,” Bruce Howard, a spokesman for the National Federation of State High School Associations, said.

New Jersey, for instance, insisted initially that its tournaments would be held as scheduled, only to encounter logistical difficulties as some host sites, like Rutgers, banned large events and a handful of high schools said they would not send teams to compete. By Thursday, New Jersey officials decided to cancel all championship games.

By Sunday morning, only three more states held championships — Nebraska, New Mexico and Louisiana — all of which limited fans and people in the venues to fewer than 250 people. Missouri wrapped up some of its championships, but not all, and there was no indication whether the remaining ones would take place, Howard said.

With championships not played in two-thirds of the country, the revenue that one million fans generate was gone from state high school association budgets.

At Central Park in New York on Sunday, Will Freel, 11, organized a three-on-three basketball tournament for nearly a dozen other sixth graders. On Friday, he learned that his track season was over and his lacrosse season was suspended.

“I’m very bummed,” he said. “My teams were where a lot of my friends are. It’s boring to sit around. I’m going to try to play a lot on my own.”

The Aspen Institute’s Project Play has set up a website to keep parents abreast of the shifting youth sports landscape as well as to offer tips on keeping their children safe, healthy and exercising.

In Massachusetts, the Wellesley High School girls’ hockey team had been gunning for a third straight state title, with the championship set for Sunday against Canton High School at TD Garden in Boston. But the team learned after practice on Thursday that all boys’ and girls’ finals would be canceled, prematurely ending the careers of seven Raiders seniors.

One of the senior captains, Bridget Noonan, said the players stayed in the locker room for two hours reflecting upon what they had accomplished in a challenging season: one girl had been out with mononucleosis, several had injuries and nearly everyone was out with flulike symptoms at some point.

“It was more genuine heartbreak than anger,” Noonan, who will play lacrosse next season at Virginia Tech, said.

Another captain, Emily Rourke, who scored the winning goal in last year’s state final, said she was with several teammates on Sunday at exactly 5:45 p.m. — the scheduled start of the final.

“We could just picture so clearly what would be happening,” said Rourke, who will play hockey next season for Hobart and William Smith Colleges. “We’d be skating up to take the face-off with all the fans. It just felt really real when it got to 5:45.”

Swimming, too, had cancellations at all levels.

The Y.M.C.A. short-course national championship, scheduled for March 30 to April 3 in Greensboro, N.C., will not be held for the first time since 1947. More than 1,400 swimmers — plus coaches and family members — were expected to descend upon Greensboro and generate an estimated $5 million in economic impact.

Jon Jolley, the director of competitive swimming at the Hickory Foundation Y.M.C.A. in Hickory, N.C., outside Charlotte, knew how important the championship meets were for high school juniors trying to lower their times and make themselves more appealing to college recruiters. He also wanted to do something for high school seniors who would not be swimming in college.

He tried to organize an alternate meet to the Y.M.C.A. nationals for Greensboro. It was met with decidedly mixed reviews.

“It was the spectrum — I had lovers out there, I had haters out there,” said Jolley, who has coached for 33 years.

But as the week wore on, and as more and more professional and collegiate sporting events were nixed, “we decided it just wasn’t worth it,” he said.

Instead, his own club held what he called a mock meet on Friday and Saturday, to give swimmers a sense of finality. It wasn’t easy, he said.

“I’ve got teenage girls crying,” Jolley said. “One of them said to me, ‘This is the most depressing day of my life.’ I said, ‘All your hard work will pay off in the future.’”