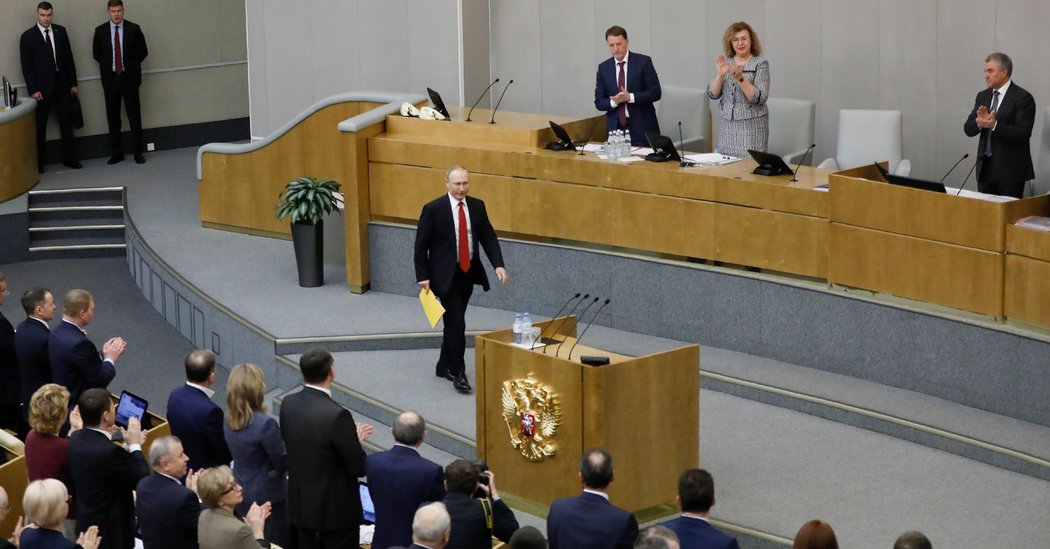 Dutifully performing its role in a highly-choreographed display of political theater, Russia’s highest court on Monday approved constitutional changes that opened the way for President Vladimir V. Putin to crash through term limits and stay in power through 2036.

With a dense 52-page ruling clogged with legalese, the Constitutional Court removed one of the last, albeit very flimsy potential obstacles to Mr. Putin effectively becoming president for life.

A final hurdle to be crossed is a nationwide referendum on constitutional changes that is scheduled for April 22. That exercise, too, is little more than a formality because of the Kremlin’s tight grip on the news media and bodies responsible for organizing the vote, not to speak of a ban on public protests.

The steady march of the coronavirus pandemic, however, could delay the final act of what the Kremlin and state-controlled new media have presented as a nail-biting drama of democracy at work but which critics denounce as a risible sham.

Russia has so far reported only 93 confirmed cases of the virus but the official count has been met with widespread skepticism in a country long accustomed to official dishonesty and cover-ups. Cynicism about officialdom has been strengthened in recent days by the Kremlin’s insistence that it was surprised by a proposal approved by legislators last week to let Mr. Putin stay in office for another 16 years.

Most independent observers believe the Kremlin orchestrated the maneuver from start to finish. Mr. Putin has not yet confirmed he will run again in 2024, but few doubt he will.

“It is rare that the spirit of slavery and intellectual cowardice express themselves with such fullness in a written text,” she said in a commentary posted on Facebook.

The Constitutional Court is headed by Valery D. Zorkin, a Soviet-trained legal scholar who has chaired the tribunal since it was formed after the 1991 collapse of the Soviet Union.

Under Mr. Zorkin, the court ruled in 1998 that Russia’s first democratically elected president, Boris N. Yeltsin, could not ignore term limits and run for a third term in 2000. Mr. Yeltsin, exhausted and gravely ill, welcomed that decision, which was issued in response to a petition submitted by his political enemies.

Unlike Mr. Yeltsin, who resigned on Dec. 31, 1999, five months before the end of his second term, his successor Mr. Putin has shown no interest in stepping down. But he had made clear that he wanted the constitutional court to this time approve a rewriting of the rules similar to the one it rejected in 1998.

Mr. Putin has already been in power for two decades, either as president or prime minister, and was supposed to step down at the end of his current term in 2024 because of constitutional term limits. But these limits were swept aside last week by lawmakers who voted to reset the clock to zero when Mr. Putin’s term runs out, allowing him to run for two more six-year terms.