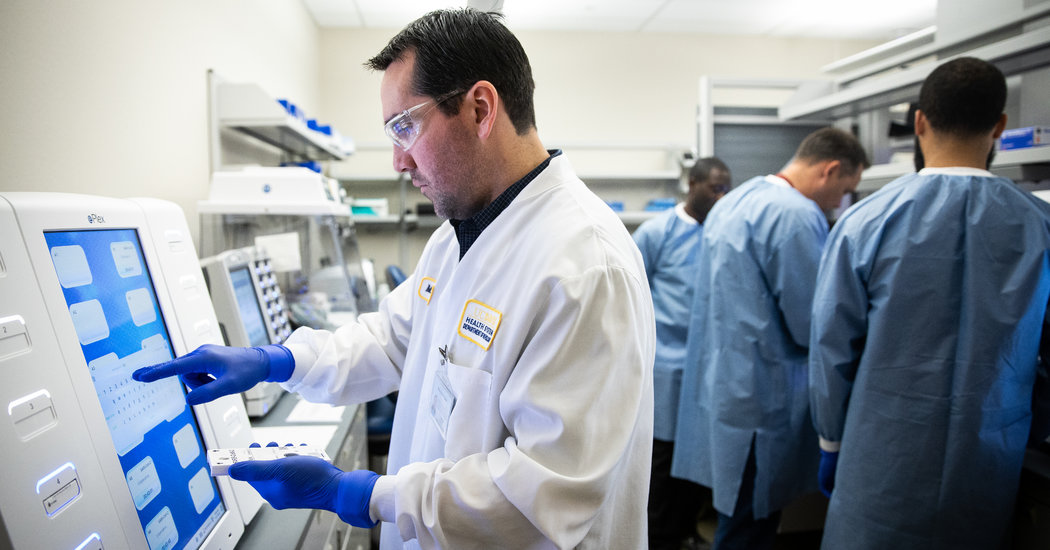 Federal officials are moving ahead with plans to address the screaming shortage of testing for the coronavirus by setting up many more drive-through testing centers around the country and speeding the capability of commercial laboratories to process multiple samples at once.

Adm. Brett P. Giroir, the assistant secretary for health at the Department of Health and Human Services, said at a White House briefing with Vice President Mike Pence that starting on Monday, 2,000 commercial labs would begin to perform coronavirus tests using high-speed machines that can process many samples at once. Those labs are expected to add somewhere from tens of thousands to hundreds of thousands of tests a week to the nation’s capacity, and 1.9 million tests should be available by the end of the week, Admiral Giroir said.

Some experts who have closely followed the government’s testing stumbles were skeptical that the federal government could meet such ambitious goals so quickly.

“We obviously welcome all the testing we can get our hands on right now in order to better elucidate what’s going on in our communities,” said Michael Osterholm, director of the Center for Infectious Disease Research and Policy at the University of Minnesota. “But given the experience of the last four to five weeks of promised testing that didn’t develop, I wait anxiously to see if this can be developed. Many of us will believe the testing ability when it happens.”

Until now, the testing has been done manually, and labs could perform only 40 to 60 tests a day.

In addition to the added high-speed laboratories, the government will help set up many more drive-through testing centers around the country so that people do not have to go to emergency rooms or doctors’ offices to be tested. The centers will be set up in store parking lots and other such locations and operated by states in conjunction with members of the U.S. Public Health Service Commissioned Corps. Each should be able to screen 2,000 to 4,000 people a day, Admiral Giroir said. The units, created by the Federal Emergency Management Agency, are known as points of distribution, or PODs.

“The sites will roll out progressively over the week,” Admiral Giroir said. “This is not make believe, it is not fantasy. We will start shipping gear and deploying officers Monday and Tuesday.”

Mr. Pence said that more than 10 states had already set up their own drive-through test sites. But some have had waiting times several hours long and had to turn people away.

Admiral Giroir said the first priority in testing would be given to health care workers, first responders and people who are particularly vulnerable, including those over 65 with symptoms and others with underlying conditions that weaken their immune systems. Regions with high numbers of cases will get first priority for the testing centers, he added.

Dr. Deborah L. Birx, the White House’s coronavirus response coordinator, and Admiral Giroir, whom Alex M. Azar II, the health and human services secretary, last week put in charge of coordinating testing efforts across federal agencies, appealed to the public not to seek testing unless symptoms and a real need were present.

Dr. Birx warned that as testing increases — Admiral Giroir described a regimen that “can test many tens of thousands to hundreds of thousands of individuals per week and maybe even more” — there will be a spike in the number of reported cases.

The shortage of tests and the long delay in starting to correct the problem have left doctors and patients frustrated and frightened, and experts say the lag in identifying cases helped hide the spread of the virus and slowed efforts to stop it.

Dr. Osterholm said that testing would play an important role in determining whether efforts to control the virus were working.

When schools are shut down, restaurants and bars are closed and Broadway has gone dark, how will authorities know when it is time to let things get back to normal? he asked.

In an email, Dr. Thomas R. Frieden, the former head of the Centers for Disease Control and Prevention said, “Testing is not a panacea.”

He warned that demands for widespread testing could even do harm. In areas where the virus is spreading, he said, people with mild or no symptoms “will take up the time, protective equipment, and lab materials of health facilities,” possibly becoming infected in the process.

Dr. Frieden added, “Testing is crucially important to find when the virus is spreading, control outbreaks in health facilities, care for people with pneumonia, and understand the virus better.”

But he emphasized that it’s important to understand the limits of testing.

“Whether the people with symptoms are positive or not, they must isolate themselves, especially from medically vulnerable people: the test could be falsely negative, or could become positive the next day. Furthermore, in a communitywide outbreak, there’s no way public health workers will be able to identify and track contacts of all people who test positive.”