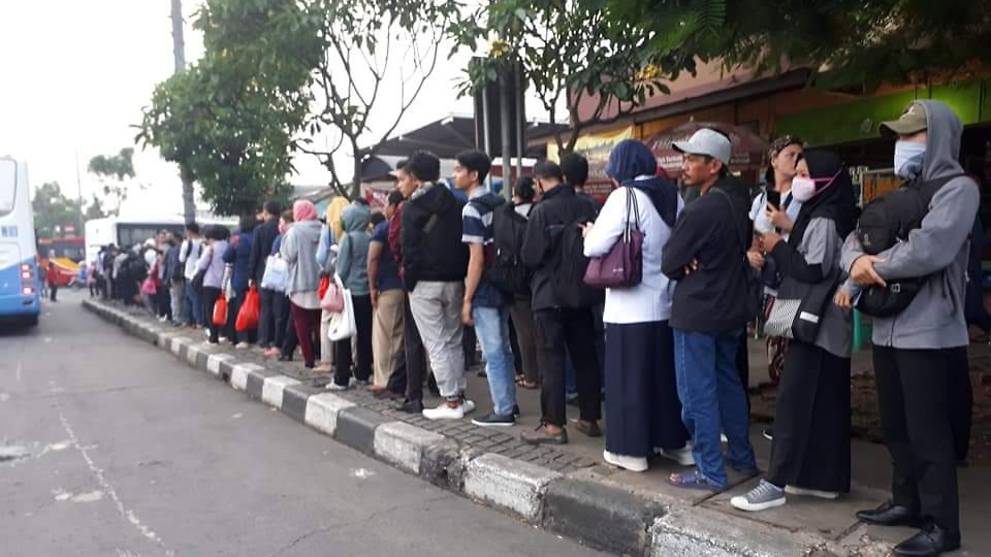 JAKARTA: The Jakarta government’s decision to limit the use of public transportation in view of the COVID-19 outbreak has backfired, with commuters complaining about the chaos and long queues at bus and train stations on Monday (Mar 16).

The services of Mass Rapid Transit (MRT), Light Rail Train and TransJakarta buses were reduced, as announced by Jakarta Governor Anies Baswedan on Sunday in a move to “significantly reduce” people’s outdoor activities.

For TransJakarta, 248 routes were slashed to just 13 with buses travelling every 20 minutes instead of the usual three to five minutes.

Instead of a 24-hour bus service, it only serves passengers between 6am and 6pm beginning Monday.

Meanwhile, only four MRT trains were operational from the usual 16, with its operational hours cut down from 19 hours (5am to midnight) to 12 hours (6am to 6pm).

Mr Baswedan told reporters on Sunday evening that the reduced services are in line with the government’s recommendation for businesses to have their employees working from home.

However, the decision has affected around one million TransJakarta users and 94,000 MRT passengers who rely on the two modes of transportation to get to work on Monday.

At Lebak Bulus MRT station, South Jakarta, a snaking queue of 500m formed outside the three-storey building, with line spilling onto the roadside pavement.

Just the start of implementation of the so called social distancing… Lets see how todays gonna unfold. 08:00 am on Stasiun MRT Lebak Bulus pic.twitter.com/cKSdqeB9c7

Meanwhile, the queue stretched more than 1km at the Puri Beta TransJakarta terminal in West Jakarta.

“I queued for two hours because they reduced the buses’ headway,” TransJakarta user Heru Cahyono told CNA. “I get that they want to minimise the risk of infection but if the queue is like this, the plan has totally backfired.”

Mr Cahyono said the government should have waited until offices began telling employees to work from home before limiting public transportation services.

“My office needs to set up the IT system and workflow. Had (the government) given time for companies to adjust and implement the recommendation, there wouldn’t be chaos like this,” the 43-year-old banker said.

Twitter user Kiky Febriani tweeted that officials did not limit the amount of passengers at TransJakarta’s Cawang UKI bus stop, East Jakarta, a busy interchange frequented by thousands of users.

“This is not social distancing but killing us slowly (for) sure,” she wrote.

Meanwhile, another Twitter user shared a photo of a crowded bus with the caption of “social distancing a la TransJakarta”.

The sharp criticisms that ensued have forced the Jakarta government to abandon the plan. Mr Baswedan, the governor, said in a presser on Monday evening that regular services will resume beginning Tuesday.

Social distancing will be practised, he added.

“We will limit the number of passengers boarding the buses and trains, as well as entering the stations and bus stops,” he said.

Earlier on Monday, Transportation analyst Ahmad Safruddin said that the government should have been more firm in instructing companies to roll out work-from-home policies, instead of just recommending them to do so.

“And this recommendation only came on Sunday, giving no time to companies to adjust,” Mr Safruddin told CNA.

“The government should have been more firm because this is an outbreak.”

Public health expert Hermawan Saputra said the overcrowding at bus stops and train stations was counterproductive to the original aim of curbing the spread of COVID-19.

He added that the policy to cut down on the use of public transportation should only be implemented in the vent of a lockdown.

“If people are still allowed to go to work and leave their houses, there must not be any restrictions on the use of public transportation,” Dr Saputra told CNA.

Dr Saputra said what the government should have done is to screen passengers using thermal scanners and provide free hand sanitiser and surgical masks at every station and bus stop.

“This will be more productive in ensuring that people are protected, with the risk of infection minimised,” he said.

In a press conference on Monday, President Joko Widodo said the central government and regional governments must continue to provide public transportation.

“(The government) should increase the cleanliness and hygiene for various types of public transportation … reduce overcrowding, prevent long queues so we can keep a safe distance from each other.”