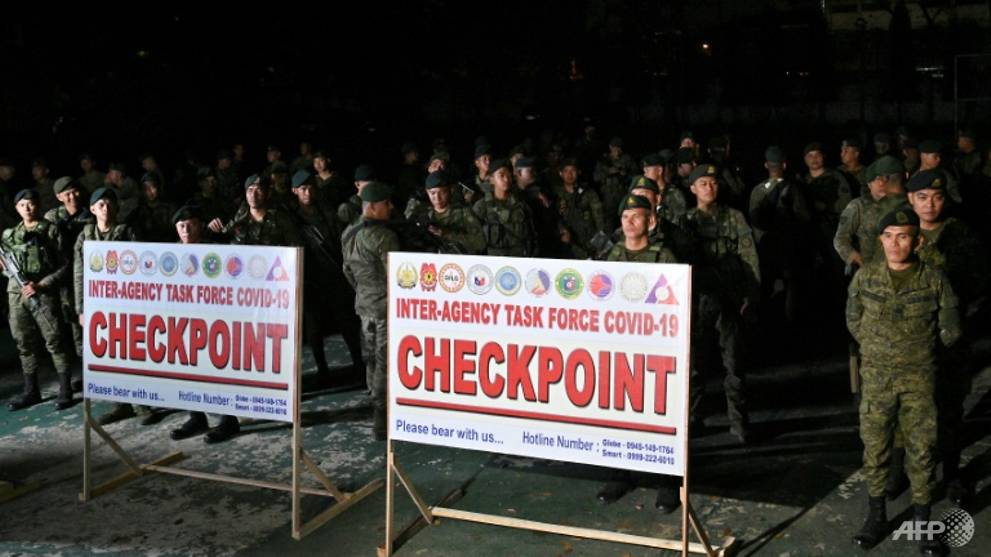 MANILA: Police began closing off access to the Philippines’ sprawling and densely populated capital Manila on Sunday (Mar 15), imposing a quarantine that officials hope will curb the nation’s rising number of coronavirus cases.

Officers armed with rifles blocked off main roads into the city of about 12 million as domestic flights to and from Manila were halted early Sunday for a month-long isolation of the capital.

Mass gatherings and school at all levels have also been called off, but delays and exceptions have led public health experts to question how effective President Rodrigo Duterte’s measures will be.

Though the Philippines has detected a fraction of the infections seen in hot spots like China or Italy, its confirmed cases nearly doubled in recent days to 111, with eight deaths.

“People are advised to stay home and not do anything,” Interior Secretary Eduardo Ano told reporters Saturday.

“We were like Italy two months ago. They were arguing whether to impose a lockdown or not,” he said, adding such a situation could not be allowed to happen in the Philippines.

The sealing off of the city is not total, as people going to work will be allowed to enter through checkpoints. Buses and trains will continue to operate inside Manila’s borders.

Ahead of Sunday’s closure people packed grocery stores to stock up, and tens of thousands also boarded buses leaving the capital while it was still permitted.

The government ordered buses, taxis and city trains to slash loads so each passenger would be a seat apart from the next, with people running fevers not allowed to board.

Manila’s local leader moved on Saturday to impose an 8pm and 5am curfew, with exceptions for travel to work, buy essentials or seek medical assistance.

However, Duterte’s spokesman, Salvador Panelo, said the president would have to approve a curfew covering the entire city and has not yet done so.

Mayors of Manila’s 17 local government areas are also pushing for shopping malls, the centres of life in the country, to be temporarily shuttered.