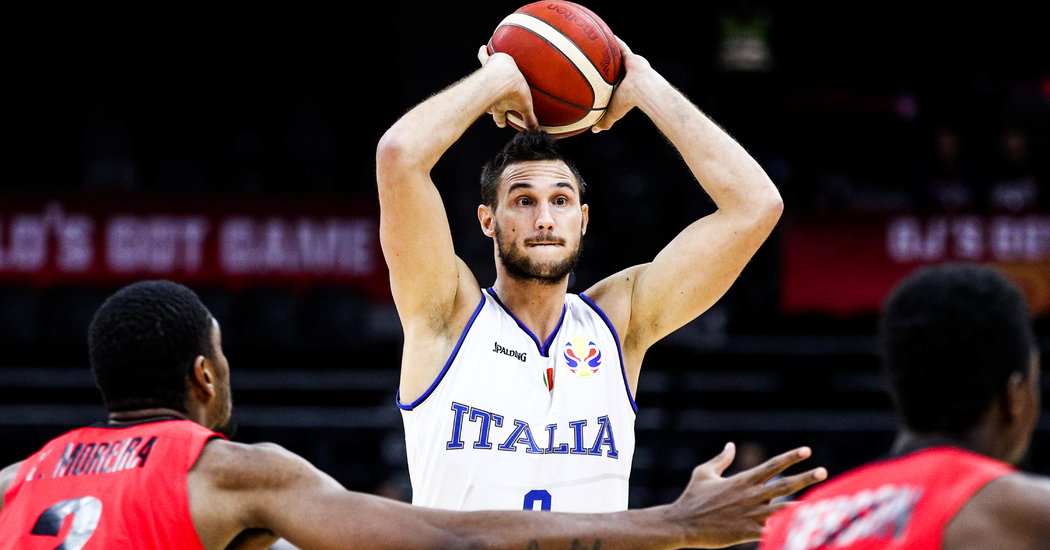 As Danilo Gallinari remembers it, he was the first player on the court Wednesday night at Chesapeake Energy Arena in Oklahoma City, eager for the jump ball that would start the game between Gallinari’s Thunder and the Utah Jazz.

Gallinari also won’t soon forget how quickly he and his teammates were ushered back to the home locker room when the game was abruptly called off after Rudy Gobert, Utah’s All-Star center, had been confirmed to have tested positive for the novel coronavirus. Gallinari recalled a lengthy wait for details and the uncommon instructions issued to Thunder players: You can shower, but you can’t leave.

“We couldn’t really understand what was going on,” Gallinari said in an interview on Sunday. “We were all shocked. Maybe I was a little less shocked than anybody else knowing what’s going in on my country.”

The N.B.A. on Wednesday became the first major professional sports league in North America to suspend operations in response to the coronavirus outbreak, now a pandemic, but Gallinari, as Italy’s pre-eminent basketball export, had been consumed by the crisis for weeks. Only China, where the respiratory virus originated, has been hit harder by the outbreak than Italy, which as of Sunday had reported nearly 25,000 confirmed coronavirus cases and more than 1,800 deaths so far.

Among those deaths was the grandmother of Filippo Conti, Gallinari’s best friend from their childhood in northern Italy — the country’s hardest-hit region — some 20 miles southeast of Milan. So when Gallinari, 31, spoke by telephone from his Oklahoma City condominium, where he is self-quarantined alongside his fiancée at the direction of team physicians and local health officials, he repeatedly brought the conversation back to Italy.

“My family has been quarantined for some weeks now,” he said.

Since March 9, before the N.B.A. and so many other U.S. sporting institutions shuttered, Italy officially went on lockdown as a country. Two days after sweeping travel restrictions were announced, restaurants, offices and shops were forced to close, with the exception of pharmacies, food stores and newsstands. Getting permission to go anywhere else in Italy requires a government-issued certificate that must be presented to police officers monitoring the streets.

Mattia Ferraresi, who works for the Italian newspaper Il Foglio, wrote recently in a cautionary piece for The Boston Globe that “it took weeks after the virus first appeared here to realize that several measures were absolutely necessary,” and that many Italians now regret not taking the coronavirus more seriously in its early stages.

“The way to avoid or mitigate all this in the United States and elsewhere is to do something similar to what Italy, Denmark and Finland are doing now, but without wasting the few, messy weeks in which we thought a few local lockdowns, canceling public gatherings and warmly encouraging working from home would be enough stop the spread of the virus,” Ferraresi wrote. “We now know that wasn’t nearly enough.”

Ferraresi got no argument from Gallinari, who recently tweeted a picture featuring the hashtag #RESTIAMOACASA, urging his countrymen to practice social distancing and stay home.

“It was a mistake that we did as Italian citizens, and I put myself in, too, because I’m Italian even if I live in the States,” Gallinari said. “Of course we did a mistake not taking it seriously in Italy and now we are the second- or third-worst country in the world for this virus. Hopefully we’re not going to make the same mistake in the States.”

Thunder players were asked to stay in the locker room after the game against Utah was canceled so they could be checked for fevers. A Thunder spokesman said on Sunday that Thunder players were subsequently tested for the coronavirus after the team secured test kits through “alternative” means so as not to further deplete the supply in Oklahoma, but results had not yet been announced as of Sunday night.

Gallinari said he had scarcely touched a ball since the N.B.A. was placed on hiatus, restricting himself to exercises he can do in his condo and, of course, checking in constantly with family members.

Gallinari’s younger brother, Federico, is a redshirt sophomore on the basketball team at Rochester University, an N.A.I.A. school in Rochester Hills, Mich. Their father, Vittorio, a former professional basketball player in Italy, is frequently in the United States on business and is currently in Denver, where Danilo played for five and a half seasons. The rest of the family, including the brothers’ mother, Marilisa, is in Italy — but travel restrictions prevent her from visiting Danilo’s grandparents roughly 30 minutes away.

Gallinari has been frequently in contact with all of them using FaceTime and Skype. He is also trying to lend support to his friend Conti, who works in the private sector in Belgium, and his friends within the game like Mitchell Poletti, who plays for Scaligera Basket Verona in Italy’s second division. Poletti’s wife and son are 90 minutes away from him, but “he hasn’t seen them for 15 days,” Gallinari said.

“Everybody is trying to find a new routine at home,” Gallinari said of Italian League players. “Basketball is not in their life anymore for now, so when they wake up in the morning, they’re trying to find something to do during the day, and it’s not easy because they have to stay home. They cannot have a regular social life.

“It’s something serious. I see in Italy, right now, for the situation to get better, citizens — they have to behave in the right way and follow the lines and the rules that the government came out with. It’s not just a government thing or a hospital thing. It’s more like a team. We have to be a team.”

Step 1, to Gallinari, meant endorsing calls before the Utah game that the N.B.A. should start playing in empty arenas. He threw his support behind the idea in an interview session early last week with Oklahoma City reporters, noting that the same measure had been taken in top-flight Italian soccer. Gobert’s positive test then changed everything — in the N.B.A. and beyond.

“As you saw, we didn’t take the middle step,” Gallinari said. “We went right to the shutdown on everything.”

As a result, just like that, Oklahoma City’s surprise season was placed on indefinite hold, with no less an authority than the N.B.A. commissioner, Adam Silver, admitting in a TNT interview on Thursday night that he could not rule out the possibility that the rest of the season would be canceled.

The Thunder, with victories in their last three games, hold the longest active winning streak in the Western Conference. At 40-24, Oklahoma City is tied for fifth in the West, after it was widely expected to miss the playoffs following off-season trades that sent the All-Star swingman Paul George to the Los Angeles Clippers and the former most valuable player Russell Westbrook to the Houston Rockets.

Gallinari, a 6-foot-10 forward, has been a key figure in the Thunder’s success alongside a fellow newcomer, Chris Paul, averaging 19.2 points and 5.5 rebounds (along with 40.9 percent shooting on 3-pointers) in one of the strongest campaigns over his 11 seasons. One of three Italian players in the N.B.A. alongside San Antonio’s Marco Belinelli and New Orleans’ Nicolo Melli, Gallinari attracted considerable interest from the Miami Heat and the Dallas Mavericks before the league’s annual trade deadline on Feb. 6, and should rank among this off-season’s most coveted free agents — but the upheaval back home has made it difficult to focus much on any of that.

“I want to get back on the court, of course, for many reasons,” Gallinari said. “But right now this is not a simple and easy situation to solve. This is bigger than basketball, bigger than anything. It’s a worldwide problem. So I do want to play basketball, but at the same time I want to know everybody is safe.”