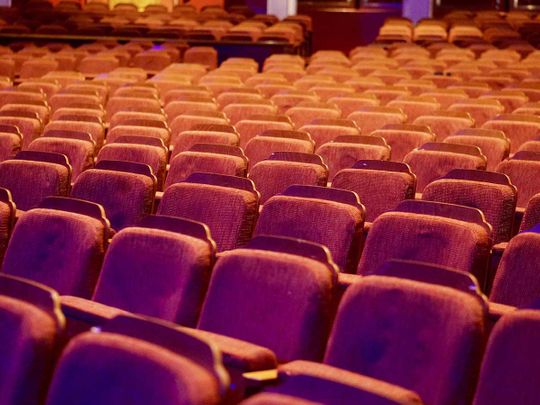 The experience of sharing a movie-theater armrest with a stranger may be over, for now at least.

The cinema industry, from the biggest chains to independent owners, are reducing capacity as part of the fight against coronavirus. AMC Entertainment Holdings Inc., the market leader, said Friday that it would cut in half the number of tickets it sells for each showing, going beyond what’s required in places with restrictions on gatherings, such as New York, California and Washington. Other companies, such as Alamo Drafthouse, are taking similar measures.

When audiences do show up, they’ll have less to see, with studios holding back releases of big new films as they wait out the crisis. Theater chains were already facing the threat of streaming, and now they have even more of an uphill battle to attract audiences.

“We recognize that ultimately we are going to be a little bit slower,” said Russell Vannorsdel, who helps run R.L. Fridley Theatres Inc., a locally owned chain of just under 100 screens in Iowa. “We’re trying to be creative.”

To allay consumers’ fears, Fridley’s is considering using empty seats as a buffer between patrons and offering everyone cleaning wipes, Vannorsdel said. Alamo Drafthouse, known for serving beer and gourmet burgers to audiences during screenings, said Thursday it would cut the capacity of its largest auditorium in San Francisco to stay within virus-related crowd limits imposed by the state, and has asked attendees to spread out.

Even so, the coronavirus outbreak gives film fans a big reason to choose the sofa and Netflix over theaters, said Jeff Bock, a senior analyst at Exhibitor Relations Co.

Closing theaters “creates a hysteria among the people that’s very hard to contain,” he said. “Especially these theaters who are already having a very difficult time, especially when they’re competing against streaming. They may be thinking: ‘If we shut our doors we may never reopen.'”

The largest chains initially said they were ramping up cleaning before announcing more draconian measures. The Twitter account dedicated to helping AMC customers has been inundated for more than a day with self-identified customers asking to pause subscription plans that allow them to see up to three films a week for a fixed fee. The company first declined those requests before saying it would give customers a one-month credit.

On Friday, AMC Chief Executive Officer Adam Aron announced that it will cut ticket sales beyond 50% in auditoriums with more than 500 seats, aiming to comply with California’s new ban on gatherings of more than 250 people. The new policy will be enacted Saturday and continue until the end of April. Regal, the No. 2 chain, said it’s reducing auditorium capacity by 50% where applicable.

With the stock market plunging and theaters especially vulnerable, shares of cinema owners have collapsed, far surpassing the decline in broader averages. Many were already struggling with high debt and declining attendance.

Normally, industry leaders would be gathering about this time of year for their annual convention – an opportunity to discuss ways to cope with the coronavirus crisis. But like other such events, CinemaCon was canceled to prevent further spread of Covid-19.

“The global circumstances make it impossible for us to mount the show that our attendees have come to expect,” John Fithian, president of the National Association of Theatre Owners, said in a statement.

Even with studios putting their new releases on hold, Fridley’s Vannorsdel said he is still looking on the bright side. He’s considering showing independent films that would normally never compete with a new James Bond installment or Disney picture. He particularly has his eye on “New Providence,” about six-on-six girls basketball in Iowa.

A flood of independent movies is available too, after industry events like South by Southwest and the Tribeca Film Festival were canceled due to Covid-19. Some widely anticipated films, like “A Quiet Place Part II” and “Mulan,” will still be released this year. Others will be held until 2021.

“The next couple months could be financially difficult, but then once we get past that, we’ll have a fantastic slate,” Vannorsdel said. “And then people will really want to be getting out of the house.