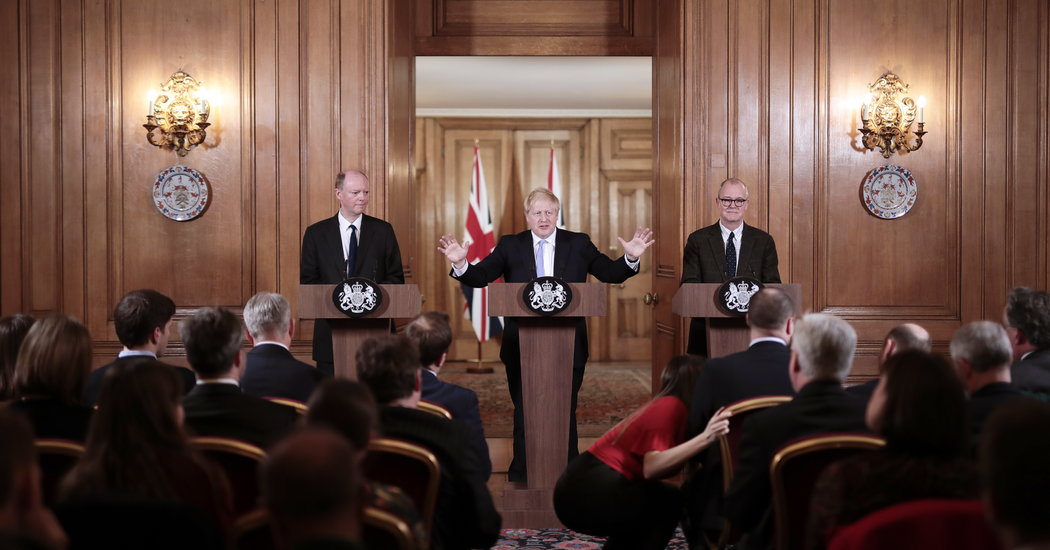 LONDON — As leaders on both sides of the English Channel batten down the hatches for the coronavirus, Prime Minister Boris Johnson is coming under rising pressure to ask the European Union for an extension in its negotiations to reach a trade agreement — in effect, putting off the next stage of Brexit until the virus exits.

Under the terms of its withdrawal agreement with Brussels, Britain legally left the European Union on Jan. 31, but it is now in a transition period that preserves most of the old relationship, and has until Dec. 31 to strike a new deal. European officials, and many in Britain, have already said that timetable was hopelessly compressed.

Now, with face-to-face negotiations on hold, analysts said Mr. Johnson should invoke his right to request an extension so that governments on both sides can concentrate on managing the response to the virus and mitigating the economic shock that is almost certain to follow it.

“It’s going to be awfully difficult for the government to focus on this while dealing with the virus and maybe a financial crisis, too,” said David Henig, a former British trade negotiator. “We are already being overtaken by events, and I think that pressure is going to start to become pretty intense.”

A spokesman for Mr. Johnson said on Friday that Britain had no plans to ask for an extension and that there were ways to conduct the negotiations even during the peak of the outbreak. Most of the substantive talks are not expected to happen until the fall anyway, and in the meantime, officials are discussing options for video conferencing links.

The opening round of negotiations took place in Brussels this month and served mainly to underscore the deep differences between the two sides. Negotiators called off a plan to meet in person in London next week.

Mr. Johnson has made getting Brexit done a fulcrum of his agenda. He has brushed aside those who say that hashing out a comprehensive agreement with Britain’s largest trading partner in 10 months is infeasible under the best of circumstances, let alone during a dire public health emergency.

But the rapid spread of the virus is already forcing the British government to reconsider its restrained response in other respects. After declining to follow other European countries in banning large public gatherings or closing schools, Britain is now considering both steps. Mr. Johnson had already postponed local elections, scheduled for May, until next year.

“In a rational world, the U.K. would ask for an extension in June even if coronavirus wasn’t happening,” said John Springford, the deputy director of the Center for European Reform, a London-based think tank.

“The pandemic makes it even more pressing,” Mr. Springford said, “because the British state will not have the personnel needed to enact the sweeping changes necessary to leave the single market.”

Britain must design and implement new customs and immigration systems; draft regulations on transportation, aviation and food safety; and begin negotiating individual trade deals with the United States, Australia, and many other countries. Analysts estimate that by itself, the additional workload from Brexit has necessitated adding 27,500 government jobs.

In January, when few leaders in the West had begun focusing on the coronavirus, the president of the European Commission, Ursula von der Leyen, urged Mr. Johnson to consider requesting an extension. Under the terms of the agreement, the prime minister must decide whether to do so by June.

Were other international trade negotiations to be put back because of the virus — for example those being conducted between London and Washington — Britain’s government could start to look obdurate about the Brexit talks.

Though video conferences can substitute for many face-to-face meetings, the Brexit talks are complex, ranging over an array of issues, from fisheries to finance, and involving a British negotiating team of 100 officials. Given the grim arithmetic of the pandemic, several of those negotiators are likely to fall ill.

“It would be better to agree a delay now,” Mr. Henig said. “If June is the peak of the virus and it is also the point where we are going to say, ‘no further extension,’ then that starts to look like a lack of forward planning.”

Analysts noted that coronavirus could give Mr. Johnson political cover to ask for an extension, if that was what he wanted to do anyway. Last fall, the prime minister cited a law passed by Parliament as giving him no choice but to ask for the withdrawal deadline to be moved from October to January.

For Mr. Johnson, however, such a move poses a dilemma. Under the terms of its agreement, Britain would be required to pay billions of pounds to the European Union if it continued to have access to the single market and customs union beyond the transition period that ends in December.

That would be an acute embarrassment for Mr. Johnson, damaging him particularly with the hard-line Brexit wing of his Conservative Party. Pro-Brexit forces have already begun campaigning against a delay — suggesting, in a strategy that echoes some defenders of President Trump in the United States, that these calls were part of an effort to exaggerate and politicize the virus for partisan ends.

“The same people who wanted to stop Brexit now want to extend the Transition Period, ostensibly over Coronavirus,” said the Bruges Group, a Euroskeptic research institute, on Twitter. “We know the pattern: Any excuse is found, one delay turns into another and Britain ends up in political purgatory. Brexiteers won’t fall for this.”

But there are significant risks if Mr. Johnson forges on with the talks to the current deadline. A failure to strike a deal with the European Union could throttle the economy because of the disruption of cross-channel trade. That would come on top of the shock from the virus, which has already upended British life, forcing Queen Elizabeth II to cancel her schedule and the Premiere League to scrub its soccer matches.

On Wednesday, Mr. Johnson’s government said it would inject 30 billion pounds, or $37 billion, into the economy to cushion it from the impact of the virus. The Bank of England cut interest rates to stabilize the situation.

One solution might be to propose a shorter extension than the one or two years so far envisioned — a period of three or six months, for example. That would relieve some of the deadline pressure on the negotiators while not raising serious doubts about the Johnson government’s commitment to Brexit.

“If it’s a question of deal versus no deal — animosity over a functioning relationship — I think that’s worth it,” Mr. Henig said.