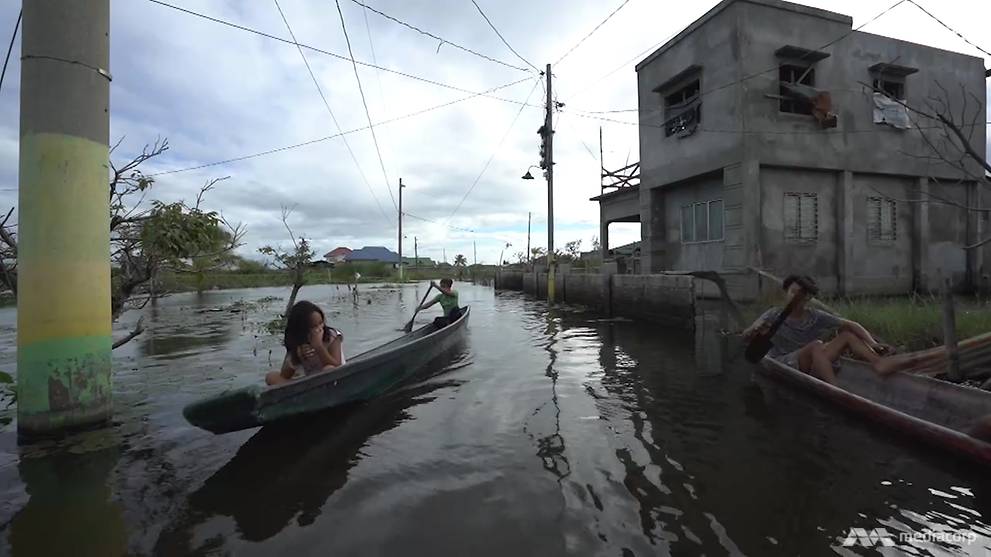 MANILA: Saturnino Espiritu remembers a time when he could walk to the nearby church in his neighbourhood. But now he must reach it by boat.

The coastal village of Sitio Pariahan, about 17 kilometres north of Manila, is where he built a home and a family. Today, its streets are gone, submerged under water.

The church has also been engulfed by water, its walls stained with moss.

“Masses are now being held with churchgoers on their boats,” said Saturnino. “The altar gets splashed by the waves. You can see oysters growing on our church grounds already.”

Some 100 families used to live in this community, but only around 40 remain today. Since 2003, their village has been sinking by around four centimetres every year.

Watch: Living in a village that’s sinking into the sea (5:31)

The rise in sea level, rapid land subsidence and the disappearance of mangrove forests explain why “water keeps gushing in towards their community”, said researcher Rodrigo Narod Eco from the University of the Philippines’ Marine Science Institute.

The troubles plaguing this village foreshadow future events in Metro Manila, which is faced with a multitude of problems including climate change and excessive groundwater extraction, the programme Insight discovers.

The Philippines is among the most vulnerable in the world to hazards such as rising sea levels, floods, earthquakes and typhoons.

It gets hit by an average of 20 typhoons a year, which can flood coastal areas. And these tropical storms, scientists believe, are likely to become more frequent and stronger because of climate change.

In the Manila Bay area, the sea level is rising four times faster than the global average rate of 3.2 millimetres a year, said Dennis Bringas, chief of the Physical Oceanography Division at the National Mapping and Resource Information Authority.

Excessive groundwater extraction has led to continual land subsidence, which will eventually result in flooding in many parts of Metro Manila.

Mahar Lagmay, executive director of the University of the Philippines Resilience Institute, said the rate of subsidence started to rise during the 1960s, at the height of the city’s industrialisation, when the growing population meant a greater demand for water.

“And if there’s no supply of surface water, then they’d need to get it from the ground,” he added.

The growth of agriculture, fisheries and commercial industries that use large volumes of water also put pressure on the groundwater resources.

The problem lies with the regulation of the water extraction, according to Susan Abano, chief of the Policy and Programme Division at the National Water Resources Board. ”We don’t have the data on those illegal extractors,” she said.

In fact, about 60 per cent of the country’s groundwater extraction is done without permits, reported the 2003 Philippine Environmental Monitor published by the World Bank.

RUBBISH IN THE WATERWAYS

The dumping of rubbish is another perennial problem in Metro Manila, whose estuaries and creeks are often clogged and must be constantly filtered by pumping stations to protect against flooding.

At the Tripa de Gallina pumping station, for example — one of Metro Manila’s 62 pumping stations — the amount of rubbish collected in a day is sometimes so much that the machine may break down.

“Even if one unit gets damaged or bogged down because of garbage … we could experience flooding, the worst kind of flooding, especially when there’s heavy rain,” said Metro Manila Development Authority’s flood control and sewerage management director, Baltazar Melgar.

And when there are high volumes of rubbish or mechanical sorting problems, the rubbish also makes its way to the bay and worsens the siltation there.

The challenges in Manila brought about by floods, overpopulation and poor traffic had actually been addressed in a World Bank-funded project in 1976.

Architect and urban planner Felino Palafox Junior, who was part of the team who drafted the plan, said: ”There was good planning but there was no implementation or updating those plans.

“Even the water crisis was addressed … (by) identifying different sources of water supply.”

Eventually, rapid urbanisation and uncontrolled population growth — in a city of 13 million now — led to weak oversight of what needed to be done, which raises the issue of whether the existing laws were implemented well.

“When you develop in wanton fashion, and all places are already occupied because of the growing population (and) the poor planning, then disaster strikes,” said Lagmay.

Scientific evidence has suggested that by 2050, many of the Philippines coastal regions, including the Manila Bay area, could find themselves underwater if countries fail to mitigate the effects of climate change.

Since 2016, however, with President Rodrigo Duterte at the helm of the country, it has been reported that more than 6,000 flood control projects have been completed to protect flood-prone areas across the country.

These include the building of pumping stations, dykes and flood warning systems.

However, Palafox Jr believes that reducing Manila’s urban density and congestion is the way forward. This includes relocating government offices to other regions. By developing other urban growth centres, he said, this could reduce the primacy of Manila.

“That would reduce the attractiveness of Metro Manila, alleviate traffic, lack of housing and many of the urban ills,” he added. “Maybe we should start looking at a new capital region.”

In fact, Manila was not always the administrative capital; in 1948, the seat of power was relocated to nearby Quezon City. “When the government offices were moved to Quezon City, there was some kind of relief (to Manila),” said Lagmay.

But in 1976, the then President, Ferdinand Marcos, reinstated Manila as the capital, although Quezon City still hosts a number of government offices today.

Lagmay said that perhaps it is time to relocate the capital again as Metro Manila has become too crowded and hard to manage.

Work has started on a new metropolis called New Clark City, located about 100 km north of Manila, to become the seat of the national government by 2030.

Already, some key government offices, such as the Department of Transportation, have already relocated there from Metro Manila.

“We have come to a point after several decades that I think there’s also a need to move the government offices elsewhere because the population of Metro Manila is extremely large and the hazards are overwhelming,” said Lagmay.