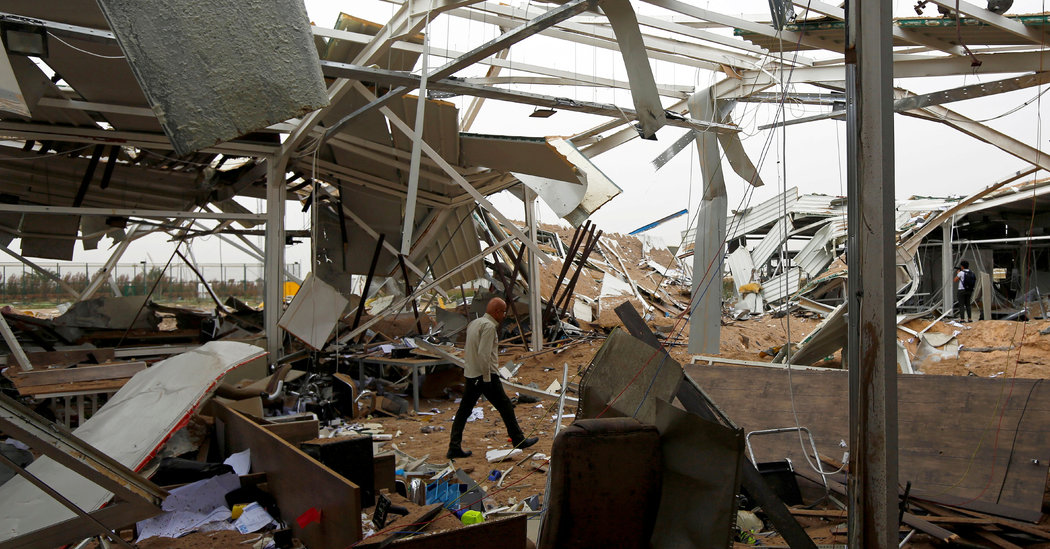 BAGHDAD — Iraqi military officials gave a scathing condemnation of the United States military on Friday for airstrikes launched overnight that they said had killed three Iraqi soldiers, two police officers and a civilian worker as well as damaging an unfinished civilian airport.

The U.S. action was retaliation for a rocket attack on Wednesday that killed two Americans and a British soldier and injured 14 others at Camp Taji, north of Baghdad, American officials said.

The airstrikes, which were supported by the British military, were meant to target a pro-Iranian militia, Kataib Hezbollah, and facilities that were believed to store the type of rockets used in the earlier attack.

However, according to multiple Iraqi military officials, who so far have been largely supportive of the U.S. role in Iraq, the bombings killed members of the Iraqi military and police. It was not clear whether they killed any Kataib Hezbollah fighters.

In a statement released Friday morning, the Iraqi Joint Command described the attack as “an aggression” that “targeted Iraqi military institutions violating the principal of partnership” between the Iraqi security forces and the Americans.

This attack “cost the lives of Iraqi fighters while they were doing their military duty,” the statement said.

In Karbala, officials for the Imam Hussein shrine who are involved in the airport’s construction because millions of pilgrims come to Karbala every year to visit its holy sites, said that a civilian worker at the airport was killed and that several others “who were working on building the airport” were wounded.

“This airport is totally civilian and the holy Husseini shrine is constructing it by agreement with several Iraqi companies and using totally Iraqi civilian workers,” the statement said.

A U.S. military officer said the overnight strikes were being assessed, but gave no other comment. A news conference is slated for Friday morning in Washington.

These tit-for-tat strikes between Iranian-backed Iraqi militia and the American coalition have been going on for months. In late December and early January, they led to a perilous standoff between Iran and the United States.

The Iraqi joint command warned that the latest American attacks not only meant that Iraqi soldiers and police officers had lost their lives, but risked undermining the relationship between the Iraqi military and the Americans, which is primarily focused on the fight against the Islamic State.

It could worsen the overall security situation by encouraging retaliation against the United States in revenge for the deaths of Iraqi service members and put the Iraqis in a difficult situation.

The attack on Iraqi forces “presents no solution to control the situation,” but will “lead to escalation and deterioration of the security situation in the Iraq, and expose all to more risks and threats,” the military statement said. “It is an act against the Iraqi state and an aggression on its sovereignty which strengthen the unlawful tendencies.”

It was unclear if the Popular Mobilization forces in Babil Province were Kataib Hezbollah members and might have been among those the Americans intended to target.

The Iraqi military has long looked at groups like Kataib Hezbollah and the other pro-Iranian armed groups with suspicion and worried about their sway within the security forces, so officials have previously offered restrained, pro forma condemnation when the U.S.-led coalition targets them.

However, the tone was far angrier on Friday, suggesting that at least one or more of the coalition’s airstrikes had taken aim at forces who have been allies.