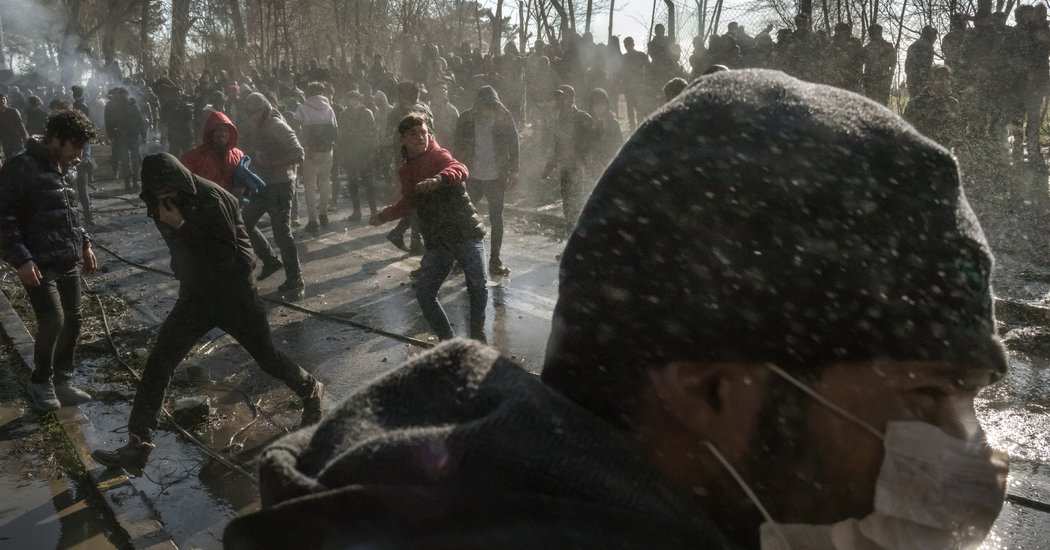 BRUSSELS — Turkey has signaled that it is winding down its two-week operation to aid the movement of tens of thousands of people toward Europe, following a tough on-the-ground response from Greek border guards and a tepid diplomatic reaction from European politicians.

Migrants at the Greek-Turkish land border began to be transported back to Istanbul by bus this week, witnesses at the border said, de-escalating a standoff that initially set off fears of another European migration crisis. Greek officials said the number of attempted border crossings had dwindled from thousands a day to a few hundred, and none were successful on Friday, even as sporadic exchanges of tear-gas with Turkish security forces continued.

Also Friday, Turkish officials announced that three human smugglers had each been sentenced to 125 years in prison for their roles in the death of a Syrian toddler, Alan Kurdi, whose drowning came to epitomize an earlier migration crisis, in 2015.

That announcement and the week’s other developments were interpreted by experts and European politicians as signals to Europe that the Turkish authorities were once again willing to police their borders and quell a second wave of migration.

It follows a tense period in which President Recep Tayyip Erdogan of Turkey attempted to engineer the reverse: a new migration crisis on Europe’s borders.

On Feb. 28, the Turkish government announced it would no longer stop migrants trying to reach Europe, and it then drove hundreds to the threshold of Greece, live-streaming the process to encourage more to follow.

The move was perceived as an attempt to rally European support for Turkey’s military campaign in northern Syria, and more European aid for the four million refugees inside Turkey.

On at least one occasion, Turkish officials even forced migrants to leave. In a video clip filmed onboard a bus ferrying people to the border, reluctant migrants were shown being forced off the vehicle at gunpoint by officers in plain clothes, and beaten when they resisted.

Marc Pierini, a former European Union envoy to Turkey, called it “the first-ever refugee exodus, albeit a limited one, fully organized by one government against another.”

The border clash not only stirred fears of a new migration crisis, but it also saw both countries react with anger and tough tactics. The Greeks have been condemned for suspending asylum applications and detaining and returning some migrants to Turkey.

To foment a sense of crisis, Turkish security forces fired tear gas over the border at their Greek counterparts and provided journalists with footage of aggressive Greek responses to migrants. Mr. Erdogan accused Greek officials of behaving like officials in Nazi Germany.

But the Turks used aggressive tactics of their own.

Footage captured by The New York Times showed Turkish security forces standing aside to allow migrants to tear down part of a fence dividing Turkey and Greece. And other footage emerged of a Turkish vessel pursuing a Greek coast guard vessel in the Aegean, and of a Turkish armored vehicle ramming a border fence between the two countries.

The Turkish Interior Ministry then sent more guards to the border — not to prevent people from leaving without documents, but to stop Greece from returning them by force, according to the Turkish interior minister, Suleyman Soylu.

The confrontation marked a low point in relations between two neighbors who have long had a fragile coexistence within NATO, and it threatened to upend a fine balance in the strategically important, energy-rich southeastern Mediterranean.

It also brought front and center the European Union’s dependence on Turkey to limit the movement of migrants toward its territory, as well as Mr. Erdogan’s willingness to weaponize migrants for his own purposes.

But experts said Mr. Erdogan’s mobilization of migrants and security forces at the borders with Europe could have backfired, being so provocative that it may have made European politicians less willing to make concessions.

“The problem is that because of the blackmail used by Turkey, getting an agreement from the European Council is going to be more difficult,” said Mr. Pierini, who is now an analyst for Carnegie Europe, a research organization.

The European Union in 2016 agreed to funnel 6 billion euros to organizations helping the nearly four million Syrian refugees in Turkey, in exchange for Turkey’s help in securing its borders with Greece.

That deal came after nearly one million refugees left Turkey for Greece, allowing them to reach the Continent’s prosperous north relatively easily.

But Turkey has complained that European funding has been slow in coming, and has been paid to aid groups as well as into its own government coffers, making it less efficient. At a meeting in Brussels this week, European Union leaders discussed with Mr. Erdogan whether the agreement would be extended and how to restore it.

Ursula von der Leyen, the president of the European Commission, said the meeting with Mr. Erdogan on Monday had been a “good start” in restoring normalcy at the Greek-Turkish borders.

The European Union is likely to eventually agree to send more money to Turkey to help with challenges posed by the refugee influx, Mr. Pierini said.

But European leaders have taken a dim view of Mr. Erdogan’s latest showmanship, and may have become even more reluctant to accede to other Turkish diplomatic priorities, Mr. Pierini added. Those include an expansion of the Turkey’s joint customs union with Europe, and further visa reforms for Turkish nationals.

The awkward coexistence between Greece and Turkey since the mid-1990s, when the two countries came close to war, could be at even greater risk of lasting damage.

“Greek-Turkish détente has been one of the cornerstones of geostrategic relations in the southeastern Mediterranean — and the potential of this collapsing is alarming to the region and Western allies,” said Ian Lesser, the vice president of the German Marshall Fund.

He said that the escalation had unleashed forces that may not be easy to manage.

“Once someone opens up Pandora’s box, in an environment when you have proxy groups, coast guards, criminal traffickers, many actors who may not be fully under the control of governments, there is always the potential to go wrong,” Mr. Lesser said.

“That’s true in Syria but it’s also true on the Greek-Turkish border,” he added.

Matina Stevis-Gridneff reported from Brussels, and Patrick Kingsley from Berlin.