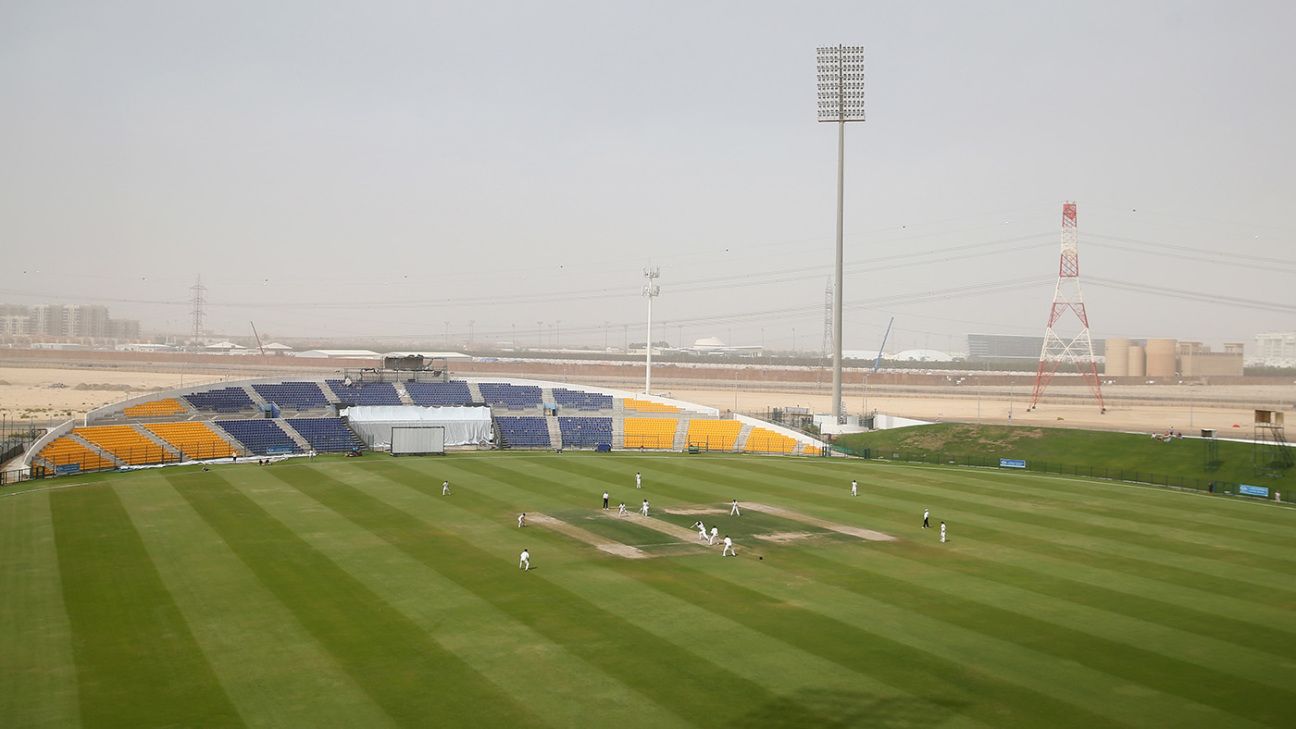 Counties’ pre-season tours have been thrown up in the air by the COVID-19 pandemic, with several clubs returning home early or cancelling their trips overseas.

On Friday, PCA chief executive Tony Irish said: “The uncertainty and speed at which COVID-19 is developing presents challenges and risks throughout the world. Some of our county teams are currently on tour in other countries and it is essential that the health risk in those countries, not only in relation to exposure to the virus but also to the protocols governing any isolation, are constantly being assessed and the players are being kept informed.

“Any situation in which players might be prevented from returning home to the UK would be disastrous. A number of counties, in exercising their respective duties of care over their teams, have already cancelled or curtailed their tours and we expect that will also happen in relation to the teams who are still on tour.”

This page will be regularly updated with the latest news from each team.

Derbyshire
Landed in Zimbabwe (no confirmed cases) on Monday. Scheduled to return to the UK on March 29, three weeks before the start of their County Championship season.

Durham
Also in Zimbabwe, landed on Thursday. Scheduled to return to the UK on March 29. Chief executive Tom Bostock said: “We are taking all measures at Emirates Riverside to make sure the venue will continue to operate as normal.”

Essex
Flew out to Abu Dhabi earlier on Monday, and training camp set to go ahead despite cancellation of fixtures. There have been at least 85 confirmed cases in the UAE to date, though several people have recovered. Champion County fixture against MCC in Sri Lanka cancelled.

Anthony McGrath, the club’s head coach, said: “It’s a shame that the trip to Sri Lanka has been cancelled along with the fixtures we were due to play in Abu Dhabi, but we’re still using this trip as a way to get ourselves sharp ahead of the 2020 campaign and ensure that when things get underway against Yorkshire in April, we’ll be as prepared as possible.

“Since arriving the spread of coronavirus has increased globally, but rest assured that all the players, coaches and support staff are taking the necessary measures to decrease the risk of infection under the guidance of our medical professionals. The health and wellbeing of the squad is at the forefront of our day to day operations.”

Glamorgan
Pre-season tour to La Manga in Spain cancelled. Mark Wallace, director of cricket, said: ‘While cancelling the tour is not ideal, the health of our players and staff is paramount to the club.

“We have excellent facilities at the ground and our players and coaching staff will work hard to make sure the impact on our pre-season preparation is minimal.”

Gloucestershire
Pre-season tour to La Manga cancelled. Chief executive Will Brown said: “The welfare of our employees and players is paramount to all at Gloucestershire Cricket. As such we think it is not advisable for our tour to go ahead to La Manga at this time.

“We would like to thank the La Manga resort, the PCA and all of the coaching and playing squads for all of their support and understanding and we look forward to returning to La Manga next year.”

Hampshire
Bowling group flew to La Manga on Wednesday, rest of squad due to join on Friday. ESPNcricinfo understands that some players have stayed home and plans are being made for those out there to return home early.

Kent
In Potchefstroom, South Africa for a training camp. No club statement as yet.

Lancashire
Scheduled trips to Dubai and South Africa cancelled. Head coach Glenn Chapple said: “South Africa isn’t one of the most affected areas, but [considering] the challenges faced by teams travelling together and being in hotels together, we have decided it would be better to stay at home and give everyone the best chance to stay fit and be ready to play.

“You could end up with 25 of you quarantined abroad and then you might have to do the same when you get back. You’re then not ready to start the season because you’ve had four weeks of inactivity. That’s why we decided it was best avoided particularly with the start to the season so close now.”

Leicestershire
Scheduled to travel to Desert Springs in Spain on March 17 for a five-day training camp. No club statement as yet.

Middlesex
Currently in Oman (at least 18 confirmed cases), scheduled to return on March 19. No statement from club suggesting cancellation is imminent, though Oman News Agency reported on Thursday that “all types of sports activities” would be suspended for a 30-day period from March 15.

Northamptonshire
Currently in Singapore, where there are at least 178 recorded cases of coronavirus, though several are no longer active. The club had considered alternative venues after the outbreak but travelled after consultation with the ECB, and head coach David Ripley told the Northamptonshire Telegraph that any non-cricketing activities had been cut, meaning “we are pretty much going to be at the hotel and then the cricket venue”.

Under current UK government advice, returning travellers from Singapore should self-isolate for 14 days if they experience any symptoms of the virus, however mild. ESPNcricinfo understands that none of the players on the tour has experienced any health issues and that the mood in the squad is good.

Nottinghamshire
Club announced cancellation of friendly against Northants yesterday, replacing it with a fixture against Lancashire. Were never scheduled to go overseas for pre-season.

Somerset
Tour to Abu Dhabi cancelled. Director of cricket Andy Hurry said: “Obviously, the health and wellbeing of our players, support staff and their families are of the highest importance.

“Although Abu Dhabi has appropriate protocols in place, the change of the national state from ‘Contain’ to ‘Delay’ coupled with the potential escalation of any isolation process for those returning to the UK have become key factors in the decision making process.

“Any imposed period of inactivity due to isolation of our players and staff would certainly adversely impact our pre-season preparation and potentially some early season fixtures.”

Surrey
Tour to Dubai cancelled. Director of cricket Alec Stewart said: “While it’s disappointing we won’t be able to return to Dubai this year, the health of our players and staff is paramount. The directive from Dubai Sports Council advising all venues to cancel or reschedule all international activities until the end of the month as a precautionary measure related to the spread of the COVID-19 means the ICC Academy are unable to host our training camp.

“As well as this, current uncertainties around travel and potential quarantine periods, either abroad or in the UK, mean this trip would simply be too disruptive to our preparations for the 2020 season.”

What a a setting…

The squad are busy training in Cape Town as their pre-season camp continuespic.twitter.com/6IPfrN6YIL

Sussex
Flew to South Africa on Monday for two-week tour, scheduled to return on March 21. Club spokesperson confirmed “as it stands, no changes” on Friday but situation being monitored.

Warwickshire
Bowling group flew to La Manga last Friday, rest of squad followed on Tuesday. Squad will return to Birmingham on Saturday. Paul Farbrace, the club’s sport director, said: “We have been closely monitoring the Coronavirus situation in Spain and have been working closely with our tour partners Sporta Group to get the latest local information.

“Whilst the Murcia region of Spain is currently one of the least affected parts of the country, the health and wellbeing of our playing squad and management is our utmost priority and bringing them back to Edgbaston is the best outcome for everyone.

“We will continue our pre-season preparations at Edgbaston next week ahead of the first friendly versus Leicestershire, which starts on March 26.”

Worcestershire
Tour to Abu Dhabi cancelled. A club statement said: “Contingency plans at WCCC have been worked on since mid-February 2020 and we hope to be in a position to update members when these plans are concluded shortly.”

Yorkshire
Arrived in Mumbai on Thursday, shortly before India confirmed suspension of foreign visas. Were due to return on March 23, but announced on Friday after that squad will come back to UK “at the earliest possible opportunity”.

“Having monitored the situation regarding the Covid-19 virus, the club has taken the decision to bring all players and staff back immediately,” a statement read. “With England’s tour to Sri Lanka postponed earlier today, and the spread of the virus expected to continue, this was deemed as the only possible course of action. The health of the players, support staff and their families come first. The club will continue to monitor the situation surrounding the virus as plans for alternative preparations for the season are made.”