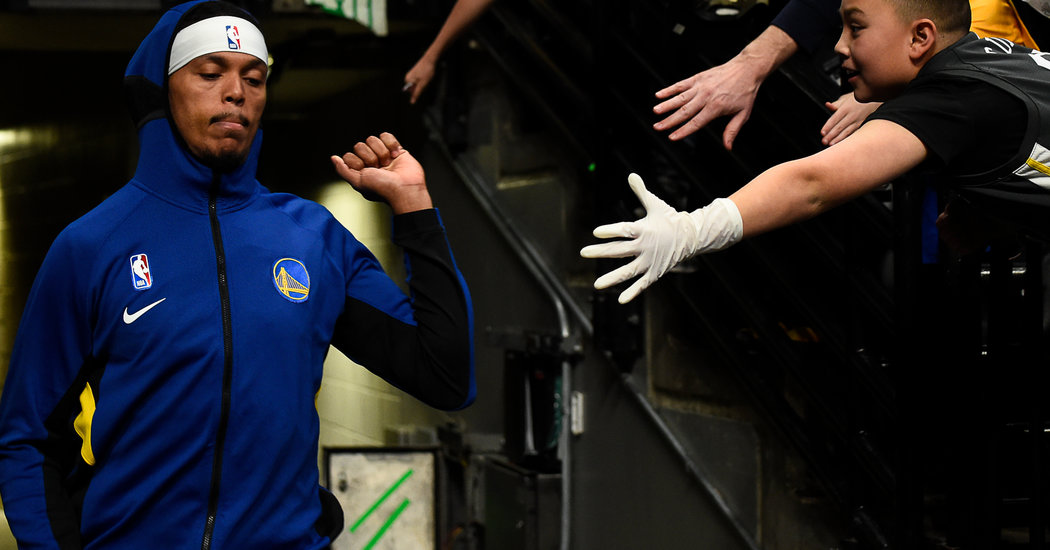 Jürgen Klopp, the coach of Liverpool, ambled out of the tunnel at Anfield before his team’s Champions League match on Wednesday night when the wiggling, outstretched hands of some enthusiastic fans entered his sightline.

It is a common sight, spectators at a sporting event looking for a bit of skin contact from their heroes, who in turn tend to absent-mindedly oblige. But Klopp clearly had other thoughts.

“Put your hands away!” Klopp barked at the fans — with a couple more colorful words thrown in — before stalking onto the field.

The spread of the coronavirus has disrupted games and leagues and schedules around the world over the past week, forcing cancellations and postponements at every level. In those games that have gone on — in professional stadiums, college arenas and local parks — there has been a notable increase in these conspicuous little moments of caution, and in the subtle second-guessing of the wisdom of a sports staple: the high-five.

In the last week, the humble, hand-to-hand slap has been singled out, stigmatized and fraught with anxiety, reflecting much of the confusion, and some of the contradiction, of the country’s early response to the coronavirus outbreak. Nevermind that the games those same athletes play inevitably include moments of close bodily contact.

Some athletes and coaches have tried to stop high-fiving altogether. Instead, they have been knocking elbows, tapping forearms, clicking cleats and trying almost anything else to avoid the germ-friendly high-fives and handshakes that public health experts have discouraged.

“I think there’s just an understanding that we’re going to do whatever we can to help protect each other and help protect ourselves,” Crystal Dunn, a defender on the United States women’s soccer team, said.

Serving as her team’s captain on Sunday, Dunn stood at the head of its pregame handshake line as a queue of players from Spain, having just high-fived the referees, approached the Americans with their hands out.

Dunn peeked back at her teammates and shrugged, unsure of what to do. As the Spanish players shuffled by, Dunn closed her hand and offered a glancing fist bump to each one.

The American women had been trying to use elbow bumps all week, with varying success, as part of a larger antivirus effort. When they took the field before matches, they had their arms around the shoulders of their child escorts, instead of holding hands. And during the match, an alert over the sold-out stadium’s public-address system noted that the players, typically approachable, “may not have as much interaction as usual with fans postgame.”

All of that mirrored the patterns emerging across sports in the past week: pregame handshake lines in the English Premier League featured players gliding past one another with their hands at their sides; some college conferences banned pregame and postgame high-fives and handshakes altogether (before banning the games too); and the Minnesota Twins led the way among baseball teams when they banned hand-to-hand contact with fans and instructed players not to sign autographs, lest a fan’s marker become a vehicle for the virus.

(It is worth pausing here to note, perhaps, that passing a single, small object around a group of people with their bare hands remains the foundational principle of many sports.)

Concerns have seeped into everyday athletes’ lives at local gyms and parks, too. Andrew Dearling, a digital marketing manager from Brooklyn, was huffing through a workout with his running club recently when another member approached with a raised hand. Dearling recoiled.

“I just smiled and went, ‘Hey, coronavirus!’” he said. “People are on autopilot. They want to give you a high-five or a fist bump. But it’s not worth it.”

Athletes may have taken for granted how omnipresent, and automatic, the high-five can be in competitive settings. It may be the one gesture that ties all of the world’s multifarious sports together: an articulation of both joy and commiseration, a way to communicate sportsmanship, or an apology, or just to generally promote warmhearted feelings.

High-fives are even thought to improve performance. In 2010, a widely circulated research paper — “Tactile Communication, Cooperation, and Performance: An Ethological Study of the NBA” — showed a positive link between touchy-feely interactions between basketball teammates and their efficacy on the court.

Good vibes, the theory went, can be contagious. But so can a lot of other things, unfortunately.

That is why Mike McGuirk, the executive director of the Bay Area Disc Association, an amateur ultimate Frisbee league in California, spent the past week parrying high-five attempts with his elbow.

“There are other ways of giving affirmation,” said McGuirk, who also asked players to disinfect their Frisbees with alcohol wipes.

“Maybe the kids come out and bow to each other,” Chiapparelli said. “Maybe they click feet.”

Questions about this approach have inevitably returned to a more difficult question: Is it worth avoiding someone’s hand before a game if you’re going to wrestle them for a rebound soon after? How does “social distancing” work when you’re in a scrum of sweaty bodies? Are fist bumps OK?

It does not help that sports locker rooms can rival kindergarten classrooms as breeding grounds for illnesses. It is a lesson that baseball players have joked about for years, and one the N.B.A.’s Utah Jazz learned the hard way in the past week.

“If one person has a sickness within the team, everyone always gets it,” the soccer star Megan Rapinoe said. “So hopefully,” she said of coronavirus, “no one gets it.”

Besides, some athletes simply cannot grasp the logic of leaving someone hanging.

Before the women’s soccer game last Sunday, Rapinoe, a noted nonconformist, was the only American player who gave traditional high-fives to the opposing players from Spain.

“We’re going to be sweating all over each other all game,” Rapinoe reasoned later, “so it sort of defeats the purpose of not doing a handshake.”

And sure enough, the match featured the normal number of germ-exchanging opportunities, perhaps undermining the moments of high-five abstinence. Within seconds of the opening whistle, defender Emily Sonnett, who had used elbow taps throughout warm-ups, offered her hand to a Spanish player who had fallen down. Other players shared water bottles, high-fived while celebrating Julie Ertz’s winning goal and shook hands with the Spanish players after the final whistle.

Last weekend, the Yankees informally resolved to bump elbows instead of slapping hands, but first baseman Luke Voit kept up his normal routine of bespoke, bombastic high-fives and shakes for each of his teammates at the very next game.

“I was like, ‘No, no, no, we’re not doing this,’” Voit said of seeing players bumping elbows in the dugout. “I’ve touched a lot of people.”

Others will continue to be proactive. Dearling, the runner, identified another potentially problematic sports behavior recently. Hurtling around the track, he felt a clump of saliva form in his mouth — a familiar feeling for many runners. Under normal circumstances, he might have turned his head and spat off to the side of the track.

But these are not normal circumstances, and Dearling, in an act of extreme sportsmanship, decided to take one for the team.

“I literally swallowed it down,” he said. “It was tough.”