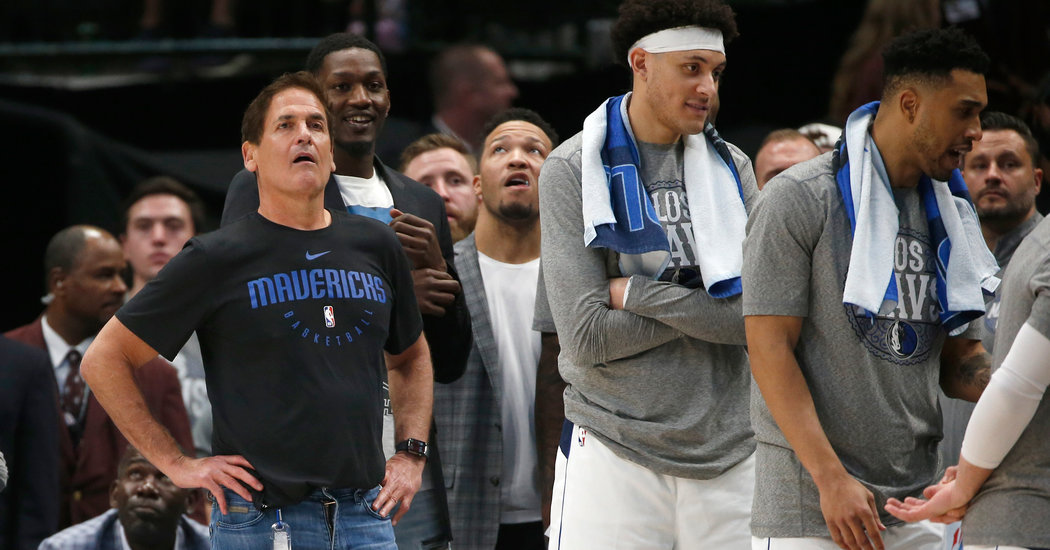 As Mark Cuban, the owner of the Dallas Mavericks, stood in his team’s home locker room before Wednesday’s game against the Denver Nuggets, he fielded an uncomfortable question from one of his players: What are the chances this N.B.A. season gets interrupted by the coronavirus crisis?

Confident that the league had not come close to reaching that point, Cuban responded with an estimate of 5 to 10 percent.

Some two hours later, Cuban was on the baseline during the third quarter. His mouth was agape in shock, then he slumped back into his seat. What he had considered highly unlikely just hours before had become a nightmare reality with implications for the entire sports world. While the Mavericks and Nuggets were still playing, the N.B.A. made the bombshell announcement that it was suspending the season because Rudy Gobert, an All-Star center for the Utah Jazz, had tested positive for the novel coronavirus.

Cuban, captured on national television as the news broke, appeared stunned. Scott Tomlin, Dallas’ vice president of basketball communications, sprang from his seat behind the scorer’s table and ran with his phone to Cuban to make sure he had seen the announcement, which the N.B.A. sent around 9:30 p.m. Eastern time.

“Obviously I didn’t expect it,” Cuban said on Thursday in a phone interview. “Nobody did.”

The N.B.A.’s 74th season has been shut down — less than 40 days before its playoffs were to begin. The league now faces perhaps the biggest, and most fluid, crisis in its history.

This season was already a strong contender to rank as the most dispiriting ever, following a preseason dispute with the Chinese government and the sudden deaths of David Stern, the former N.B.A. commissioner, and of Kobe Bryant, the former Los Angeles Lakers superstar.

And it may yet get worse: Gobert’s teammate Donovan Mitchell, also an All-Star, tested positive for the coronavirus as well. Individual players and entire teams across the league who have recently crossed paths with the Jazz are going into self-quarantine, and there is so far no indication how soon, if at all, this season’s remaining games can be played.

The N.B.A. is now grappling with an unsettled present — managing the spread of the virus among players and staff — and an unsettled future, where the league’s cultural standing and revenues are threatened. For the last decade, the N.B.A. has been ascendant, with a marketable crop of talented young players, rising television ratings and high-quality competition. Now that momentum may be curtailed.

Cuban’s hope that the season could avoid a complete derailment most likely stemmed from a Wednesday afternoon conference call conducted by the N.B.A. with owners and high-ranking representatives from each of the league’s 30 teams.

They debated how to keep the season going while managing public health concerns. Although some teams had been privately fearful that suspending the season was inevitable given how quickly the virus was spreading, there was little sense at that point in the afternoon that the virus would soon strike one of the league’s own.

Among the options discussed on the Wednesday conference call, according to two people familiar with the topics who were not authorized to discuss them publicly, was putting the season on a brief hiatus and playing into the summer to crown a 2019-20 champion. But there was more support, according to the people, for trying to play games in empty arenas without fans than putting the season on hold indefinitely.

The Knicks, according to two people briefed on the discussion, were among the teams who said that the league should wait for more direction from local government agencies before committing to next steps.

There was also another call — with the N.B.A.’s Advisory/Finance Committee, a smaller subset of team owners — and a league office meeting with the players’ association to discuss a path forward.

Earlier Wednesday, it had been announced that the Golden State Warriors would host the Nets at Chase Center in San Francisco without spectators after city officials there had banned public gatherings of more than 1,000 people. The template for what was coming in cities all over the N.B.A. map had seemingly been established.

Then came Gobert’s positive test for the coronavirus.

“I think once a player got it, that’s when you see everybody say, ‘Uh-oh,’” Charles Barkley, the Turner Sports analyst and former Hall of Fame player, said by telephone. “They wanted to keep some money coming in and play some games, but when a player got sick, that was the tipping point.”

Within 24 hours, the other major North American men’s sports leagues had followed the N.B.A.’s lead and suspended (N.H.L. and M.L.S.) or altered (M.L.B.) their regular-season plans. The W.N.B.A., which is to start its preseason on May 1, has not announced any changes, but the National Women’s Soccer League canceled its preseason match schedule and the N.W.H.L. postponed its championship game.

Barkley caused a stir Thursday morning in an appearance on the ESPN show “Get Up” when he suggested that his employers at Turner and CBS Sports who “write a check every year for March Madness for a billion dollars” should “bite the bullet” and encourage the cancellation of the N.C.A.A. men’s tournament.

“I felt bad, but I’ve got to tell the truth,” Barkley said by phone. “They’ve got to do the right thing and protect these players.”

Hours later, the N.C.A.A. announced the cancellation of the men’s and women’s basketball tournaments, as well as all other championships for winter and spring sports.

The N.B.A. has been criticized for how long it took to consider playing in front of empty crowds. Earlier this week, Gov. Gavin Newsom of California castigated the N.B.A. and other professional sports leagues for continuing to play in crowded stadiums while barring members of the news media from locker rooms.

On Thursday, Mike Bass, an N.B.A. spokesman, said the league had been relying on the advice of infectious disease specialists and public health officials to guide its decision-making. “Upon learning that one of our players tested positive for Covid-19, we immediately took the unprecedented step to suspend the season,” Bass said.

N.B.A. officials insisted they had been discussing contingency measures for at least two months. But the suddenness of the suspension on Wednesday night produced uncomfortable scenes around the league. For roughly a half-hour, fans in Oklahoma City were treated to dance and music performances before a public address announcer said the game was postponed. He added “We are all safe!” without much additional information.

Soon after, a game between the Sacramento Kings and the New Orleans Pelicans was also postponed as fans in the arena booed. A referee who was set to work the matchup had recently officiated a game involving Gobert.

There is “an uneasiness” among players about “how quickly the virus can spread,” said Todd Ramasar, an agent who represents a number of N.B.A. players, including Pascal Siakam of the Toronto Raptors, who matched up directly against Gobert in a game on Monday.

In a phone interview, Ramasar noted players’ discomfort, but he also praised the league for its response to Gobert’s positive test.

“I think the N.B.A. is moving at a better rate than our government is,” Ramasar said.

The ramifications for the N.B.A., if this postponement endures or morphs into an outright cancellation of the season, could be felt for years. The league, which brings in billions of dollars each year, would take a sizable hit in lost revenue from ticket sales, concessions and television contracts.

That damage would be in addition to revenue lost in the ongoing dispute with the Chinese government, which N.B.A. Commissioner Adam Silver has said could be “hundreds of millions” of dollars. The lost income would affect next year’s salary cap — the amount that teams spend on players — depressing player salaries.

It could also spark an all-out brawl with the players’ union. The league’s collective bargaining agreement allows the N.B.A. to reduce player salaries by 1/92.6th for each game missed because of, among other things, epidemics.

The league and union have not yet had any discussions about whether the N.B.A. will do so, according to a person familiar with the situation, in large part because it is still unclear whether this season’s games will be played later or, as no one could have imagined, never played at all.