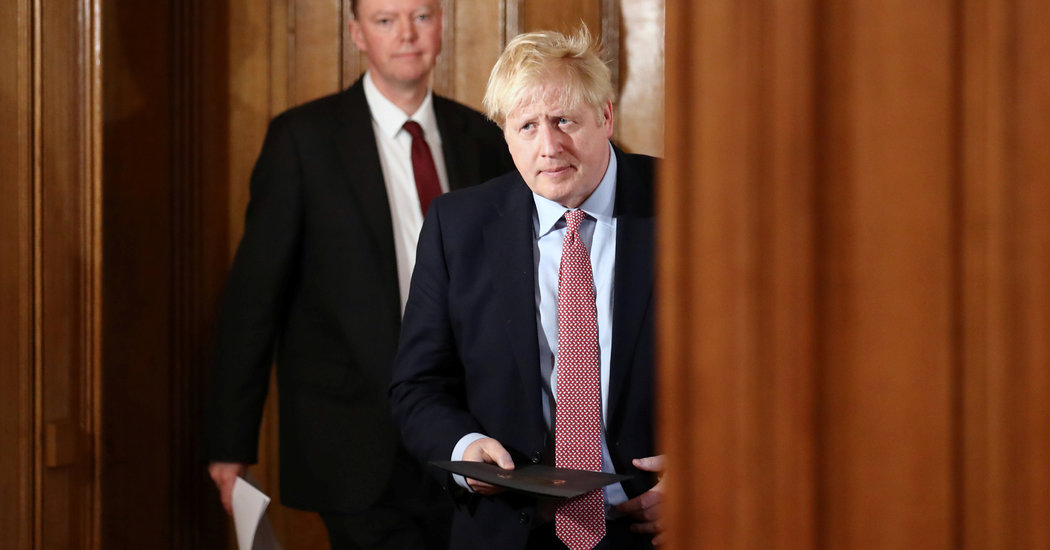 LONDON — Prime Minister Boris Johnson of Britain once said his political hero was the mayor in the film “Jaws,” praising him for defying mass hysteria to keep the beaches open after a constituent is eaten by a shark.

As the coronavirus now stampedes across Britain and much of the world, Mr. Johnson is heeding the same principle, spurning the mass closures that have become commonplace across Europe and gambling his political future on a more restrained approach.

While countries across Europe have shut schools, sporting events and even restaurants and bars, Mr. Johnson has largely kept Britain open, opting for more targeted measures like asking people with respiratory symptoms to stay home. In effect, his government has said that mass closures will not halt the outbreak, and that exposing a large segment of the population will help build immunity and limit future infections.

That strategy has startled some epidemiologists, drawn criticism from a former health secretary and political ally, and prompted angry demands that Mr. Johnson’s government reveal more of its reasoning.

Cases of the coronavirus in Britain, held low for weeks as officials tracked down the contacts of known patients, have now surged, rising to nearly 800 on Friday from fewer than 600 a day before. With testing limited to hospital patients, Mr. Johnson said on Thursday that the true number of people infected may be as many as 10,000.

President Trump, citing the rising case count, said Friday that he was considering adding Britain to the list of European countries whose citizens are banned from flying to the United States.

“There’s no other country in the world managing the epidemic in the same way,” Francois Balloux, an infectious disease epidemiologist at University College London, said of Britain’s approach. But, he said, “It’s not an insane decision. And it might actually pay off.”

The government is leaning heavily on skepticism in some scientific circles about the effectiveness of mass closures. Some epidemiologists fear that closing schools only pulls front-line doctors and nurses away from their work, and believe that large events are less dangerous for spreading the virus than more intimate gatherings at bars or at people’s homes.

It has also said that the measures it has taken, like asking people with persistent coughs and high temperatures to stay home for a week, will reduce the spread of the virus considerably.

But British advisers are also leaning on a more contentious theory: that exposing a large proportion of the population to the coronavirus could help people develop immunity, and put Britain in a better position to defend itself against the virus roaring back next winter.

Sir Patrick Vallance, England’s chief scientific adviser, said the government was looking “to build up some kind of herd immunity so more people are immune to this disease and we reduce the transmission.”

Herd immunity, a term usually used to refer to the way mass vaccinations can stop the spread of disease and protect people who are not immune, is not seen by many scientists as a tool to be used against the coronavirus. Mr. Vallance has said that it would require roughly 60 percent of Britons to become infected, creating enough immunity in the population that a second surge in cases next winter would be less severe.

But experts said that was an unusual and untested approach, and that it would be impossible to keep older and more vulnerable people from becoming infected too, putting them at a significant risk. They cautioned that the science was unsettled on how quickly people develop immunity to the coronavirus, and for how long. And experts urged the government to show more of the evidence behind its thinking.

“Herd immunity means 70 percent of people or so have been infected,” said Martin Hibberd, a professor of infectious diseases at the London School of Hygiene and Tropical Medicine. “In my mind, that’s not a desirable aim. That’s a kind of consequence of the strategy.”

Britain’s approach reflects the hyper-rationalist self-image of a prime minister who has not always hewed so closely to scientists in the past, as when he occasionally trafficked in discredited theories about climate change.

In this instance, Mr. Johnson has fashioned himself as the dispassionate answer to leaders across Europe who have acted more aggressively.

In the absence of government-mandated shutdowns, private companies in Britain have taken up the slack.

Unilever, the British-Dutch consumer goods company, said on Friday that it was ordering all its office-based employees to work from home starting next week. And the Premier League, England’s highest-level soccer league, suspended games until at least next month.

Mr. Johnson’s government itself moved on Friday to postpone hundreds of local elections and the London mayoral election for a year after a watchdog said the coronavirus would affect campaigning and voting.

But Mr. Johnson has resisted other measures, like closing schools, restricting mass gatherings, steering people away from restaurants or bars and banning crowds from sporting events.

“They’re trying to walk this terrible balance between not alarming the public, not hurting the economy, but making sure you try to flatten this epidemic,” said Roy Anderson, a professor of infectious disease epidemiology at Imperial College London. “Is it going to work? I’m not sure, to be honest.”

The strategy amounts to a blunt admission by the British government that stopping the coronavirus here was now impossible, and replicating the success of places like Hong Kong that have encouraged more extreme social distancing a futile hope. Instead, Britain is effectively banking that its more modest restrictions will keep the outbreak limited until summer, scientists said.

By then, it hopes that the warmer weather will reduce further transmission — though virologists still do not know if that will hold true — and the National Health Service, free of the usual wintertime crowds, will be better able to cope with whomever is infected.

“The idea is more to minimize the number of casualties over the long term,” Professor Balloux said, “and that’s completely unique. All other countries are firefighting in the short term.”

But the clamor for short-term firefighting has picked up in recent days.

Jeremy Hunt, the former health secretary, who like Mr. Johnson is a Conservative lawmaker, broke ranks and called for more stringent restrictions: banning visitors from nursing homes, encouraging people to work from home and closing schools.

“I think it is surprising and concerning that we’re not doing any of it at all when we have just four weeks before we get to the stage that Italy is at,” Mr. Hunt said in a television interview. “You would have thought that every single thing we do in that four weeks would be designed to slow the spread of people catching the virus.”

Some epidemiologists have also bristled at the government’s reliance on a private firm of behavioral scientists, known as the “nudge unit.” That unit has helped shape the government’s approach to delaying any shutdowns until later in the course of the virus, on the theory that people will get bored of staying at home by the time the outbreak is at its peak and separation is most needed.

Helen Ward, a professor of public health at Imperial College London, said the government’s advisers should disclose more of their thinking.

“We don’t know the evidence on which the government has made its decisions,” Professor Ward said.

She also said the government should consider making stronger recommendations to older people to cut back on their exposure. Mr. Johnson discouraged older Britons this week only from going on cruises, though many epidemiologists urge considerably stronger precautions.

And Professor Hibberd, of the London School of Hygiene, said the government’s approach may not rely enough on testing. Without knowing whether Britain is suffering a more concentrated outbreak, as in the north of Italy, or whether its death rate is as low as it believes, it is difficult to craft the right response.

“If there’s something I feel is missing,” he said, “it’s that they haven’t tested sufficiently.”