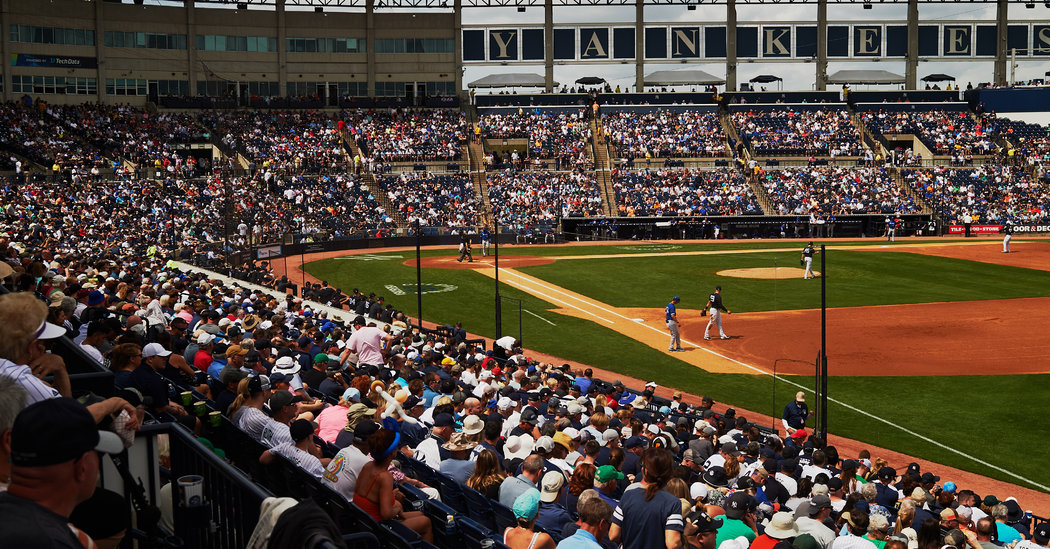 Major League Baseball became the latest professional sports league to respond to the threat of the novel coronavirus on Thursday, postponing the start of its regular season by at least two weeks.

The league also announced that all spring training games would be canceled, effective immediately.

“Following a call with the 30 clubs, and after consultation with the Major League Baseball Players Association, Commissioner Robert D. Manfred Jr. today announced that M.L.B. has decided to suspend spring training games and to delay the start of the 2020 regular season by at least two weeks due to the national emergency created by the coronavirus pandemic,” M.L.B. said in a statement.

Baseball acted only after the N.B.A., the N.H.L. and M.L.S. — the three active major American professional leagues — had all made announcements suspending their seasons. Baseball’s regular-season schedule was set to begin on March 26, giving M.L.B. the advantage of time, but preseason exhibitions continued as scheduled Thursday morning — with, as always, thousands of fans and stadium workers mingling at the games.

Even before the announcement, individual teams had taken steps to protect club employees. The Yankees were among several teams that have called all professional scouts and national cross-checkers off the road, though scouts will still be allowed to evaluate players in their home areas.

“We will take our lead from people that are immersed with expertise more so than any sports entities,” General Manager Brian Cashman of the Yankees said. “We are trying to implement best practices as we go along. Every day there is a new adjustment to it.”

Baseball has suspended its season before, postponing a week of games after the Sept. 11 terrorist attacks in 2001. Those games were made up at the end of the regular season, pushing back the postseason by a week. The 1989 World Series was also suspended for more than a week after an earthquake struck Northern California just before the scheduled start of Game 3 in San Francisco.

Several seasons have also been shortened by work stoppages without making up missed games, including 1972, 1981, 1994 and 1995. But baseball has played a full, 162-game schedule every year since, with only a handful of games missed because of weather.

In Japan, which has more than 1,300 confirmed cases of the coronavirus, the professional baseball league on Monday postponed the start of its season, which had been set to begin on March 20.

Chris Iannetta, a veteran catcher for the Yankees who has been active in the players’ association, said M.L.B. was different from the N.B.A. because of the venues, and expressed hope that baseball games could continue.

“We are an outdoor sport,” he said. “You know, our TV dollars are pretty big, and this is a business.

Of course, the same could be said for other sports, which also generate TV revenue and provide entertainment. And M.L.S. games, like most baseball games, are played outdoors. Shortly after Iannetta spoke, M.L.B. fell in line with the other sports in adjusting to the rapidly changing reality of managing the unknown.