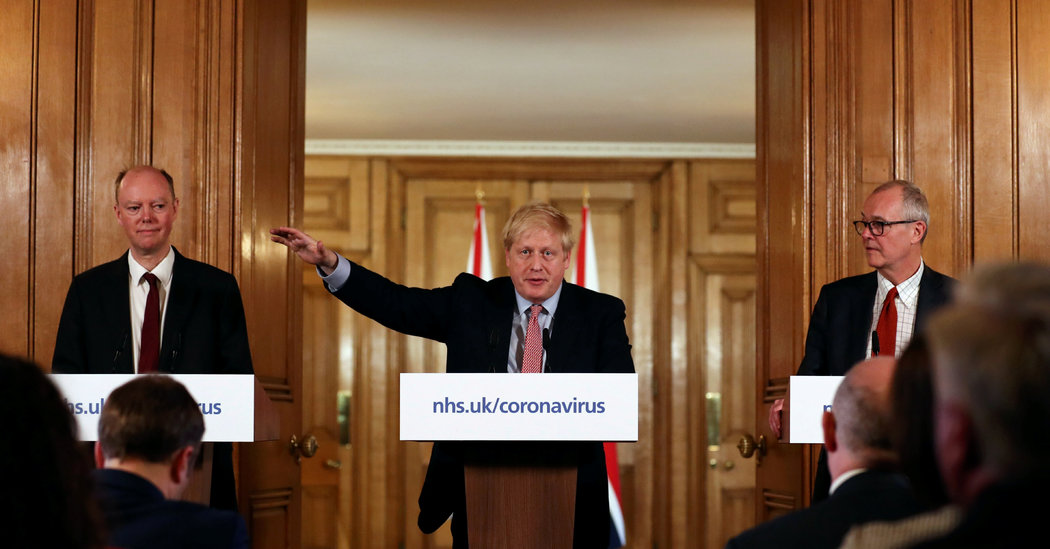 LONDON — Prime Minister Boris Johnson, resisting mounting pressure to fall in line with the radical responses of other European countries to try to curb the coronavirus, stuck to a notably restrained set of measures on Thursday, even as the Trump administration exempted Britain from a trans-Atlantic travel ban.

In a speech and a lengthy news conference that followed, Mr. Johnson and his health and science advisers said the government is asking people with flu-like symptoms to stay at home for seven days and calling on elderly people to avoid cruises and schools to cancel field trips abroad. But Britain will not close its schools and it has yet to ban large public gatherings, like concerts or sports events.

Mr. Johnson’s approach was in marked contrast to those imposed by neighbors like Ireland and Denmark, where the authorities said they would ban mass gatherings and close schools. It raised further questions about why President Trump exempted Britain from the travel ban, but not France or Germany, both of which have gone further than Britain to try to limit the spread of the disease.

Medical officials estimated the number of infected people in the country at between 5,000 and 10,000, some 10 to 20 times the official estimate of 590 cases. These numbers, they warned, will rise rapidly over the coming weeks.

On Thursday, the virus took another high-profile casualty: the negotiations between Britain and the European Union for a post-Brexit trade agreement. Already under heavy pressure from a compressed calendar, the two sides said they would not meet in person next week in London as scheduled but would explore other options, like conducting the session via video conference.

“It’s now a global pandemic, and the number of cases will rise sharply,” Mr. Johnson said at a Downing Street news conference. “Many more families are going to lose loved ones before their time.”

Britain’s reluctance to follow its neighbors reveals both a scientific skepticism in the efficacy of actions like school closings and travel bans, as well as a calculated decision, which government officials said was based on sophisticated modeling, to spread out the effects of the virus, so fewer people are sick at any one time and the National Health Service, which is less busy in the summer months, is not overwhelmed.

Britain, in effect, is accepting that people will become infected as the price for building up immunity in the population.

Also, if they enact radical measures too soon, the officials said, the risk is that it will make people resistant to such policies later on, when the virus is more widespread and those measures would have a greater impact. Schools, for example, would have to be closed for between 13 and 16 weeks to be effective, they said.

Mr. Johnson said he understood that the public might question the disparity between Britain and other countries, but he said the strategy was based on the recommendations of his advisers — a potentially risky course should the measures later be deemed to have been inadequate.

In his speech Wednesday evening announcing the travel ban, Mr. Trump said he was targeting the European Union because, he claimed, it “failed to take the same precautions and restrict travel from China and other hot spots.” But British officials said such bans do not work, noting that three quarters of the patients in intensive care in Britain had no history of traveling.

Britain’s main policy shift was to ask those who have a temperature of more than 37.8 degrees Celsius, or 100.4 Fahrenheit, or a persistent cough that lasts more than a few hours, to stay home for seven days. Scientists said the disease is most infectious around the time when people first suffer symptoms, making this form of self-isolation the most effective step in slowing its spread.

Mr. Johnson announced his steps only hours after Scotland’s first minister, Nicola Sturgeon, said events with 500 people or more should be called off, while the Irish prime minister, Leo Varadkar, said that schools, colleges and child-care facilities would be closed until March 29.

The Johnson government argued that canceling major public events would have limited impact — only a 5 percent reduction in the spread, it estimated. If people watch sports events in bars, rather than in open air stadiums, they could be more at risk, the officials said.

As for school closings, they said it would lead to children spending more time with grandparents, risking the spread of the virus to a more vulnerable age group. Moreover, parents in critical jobs, including in the health service, would have to stay home, making it harder to deal with the epidemic.

With nearly 600 cases, and 10 deaths, Britain is not far behind France and Germany in the evolution of the virus. The number of cases jumped by 140 on Thursday, the first time that the daily increase exceeded 100.

Mr. Trump’s exemption appeared mostly a symbolic pat on the back for Britain’s departure from the European Union, a policy he has championed.

In its proclamation enforcing the ban, the White House said it had targeted the 26 countries in the Schengen zone because “the free flow of people between the Schengen Area countries makes the task of managing the spread of the virus difficult.” But travel between Schengen countries and Britain is scarcely more restricted; trains run hourly between London and the Continent.

The State Department said Secretary of State Mike Pompeo spoke with Britain’s foreign secretary, Dominic Raab, on Wednesday about the rocket attack on American and British troops in Iraq. But the department’s statement made no mention that Mr. Pompeo told Mr. Raab of the impending travel ban.

Diplomats said they were not surprised by the White House’s lack of warning, given that it had failed to consult or tip off allies before previous sensitive decisions. Some said the exemption would be a relief to members of Mr. Johnson’s government, given the economic disruption that would be caused by a ban.

For Brexiteers, it was a vindication of their campaign to break off from the European Union. Nigel Farage, the leader of the Brexit Party, said on Twitter that Mr. Trump’s steps were “drastic but necessary” — evidence that “the U.K. is now treated as an independent country.”

It was, said Peter Westmacott, a former British ambassador to Washington, “music to Brexit ears.”

Of course,” he added, “the announcement is of no help with the core issue right now, which is testing, so we can slow the spread.”