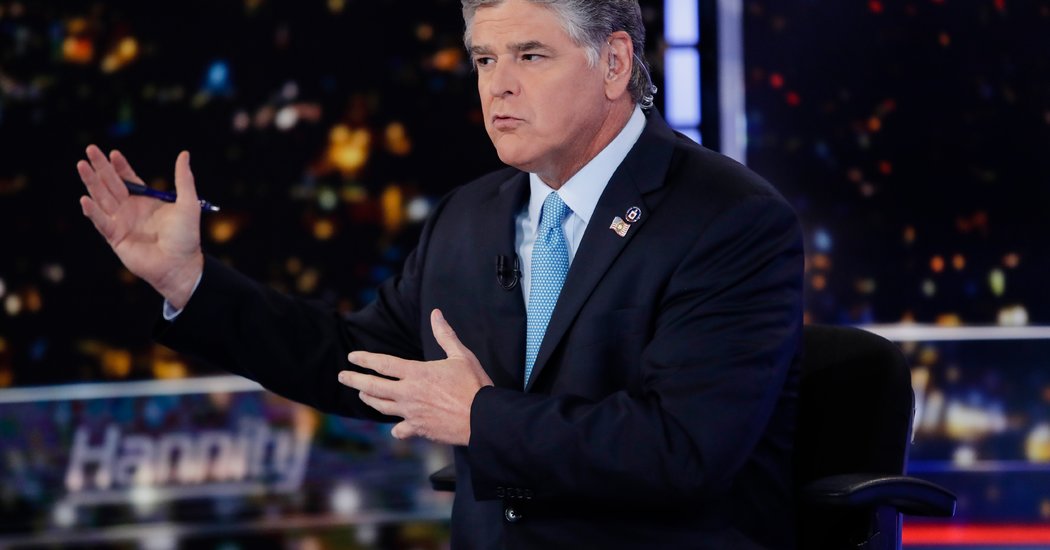 Sean Hannity used his syndicated talk-radio program on Wednesday to share a prediction he had found on Twitter about what is really happening with the coronavirus: It’s a “fraud” by the deep state to spread panic in the populace, manipulate the economy and suppress dissent.

“May be true,” Mr. Hannity declared to millions of listeners around the country.

As the coronavirus spreads around the globe, denial and disinformation about the risks are proliferating on media outlets popular with conservatives.

“This coronavirus?” Rush Limbaugh asked skeptically during his Wednesday program, suggesting it was all a plot hatched by the Chinese. “Nothing like wiping out the entire U.S. economy with a biothreat from China, is there?” he said.

The Fox Business anchor Trish Regan told viewers on Monday that the worry over coronavirus “is yet another attempt to impeach the president.”

Where doctors and scientists see a public health crisis, President Trump and his media allies have seen a political coup afoot.

Even on Wednesday night, after Mr. Trump gave an unusually somber address to the nation in which he announced he was suspending all travel from Europe for 30 days, Mr. Hannity criticized Democrats and vigorously defended the president’s response to the crisis, saying that when he instituted travel restrictions on China over a month ago, “no president had ever acted that fast.”

Distorted realities and discarded facts are now such a part of everyday life that the way they shape events like impeachment, a mass shooting or a presidential address often goes unmentioned.

But when partisan news meets a pandemic, the information silos where people shelter themselves can become not just deluded but also dangerous, according to those who criticize conservative commentators for shedding any semblance of objectivity when it comes to covering the president.

“This sort of media spin poses a clear and present danger to public health,” said Charlie Sykes, a longtime conservative host and author who published a book, “How the Right Lost Its Mind,” in 2018. “If you have people out there who feel all of this is overblown, and feel the need to act out their lack of concern by not taking precautions, it could be exceptionally dangerous.

“That’s not just a problem for the right wing, that becomes a real threat to the general population,” added Mr. Sykes, who is also a contributor to MSNBC. “When people start dying, the entertainment value wears off.”

In the case of Fox News viewers and talk radio listeners, who tend to be older than the general population, the danger of playing down the threat is potentially far worse. The Centers for Disease Control and Prevention has specifically identified older people as being at higher risk from serious complications if they contract the virus. The typical Fox News viewer is in his or her mid-60s, similar to CNN and MSNBC.

Despite Mr. Hannity’s own skeptical commentary, his Tuesday show featured Dr. Anthony S. Fauci, the director of the National Institute of Allergy and Infectious Diseases, as a guest. He told Mr. Hannity that he wanted to “make sure” viewers knew that the coronavirus “is 10 times more lethal than the seasonal flu — you got to make sure that people understand that.”

It was not difficult to see why Dr. Fauci would think Mr. Hannity’s roughly four million viewers — the biggest audience in cable news — might not understand. On Tuesday, the star anchor told his viewers, effectively, to relax.

“Sadly, these viruses pop up time to time,” Mr. Hannity said, with the certitude of a medical professional. “Pandemics happen, time to time.”

Mr. Limbaugh has offered clinical advice. Recently he defended his widely criticized comparison of the coronavirus to the common cold and suggested the timing of the coverage of the outbreak raised “a gigantic series of question marks and red flags.”

And not all the prominent players in conservative opinion are denying the seriousness of the threat. Disagreement on the right has spilled into public view in a way that is unusual, given how swiftly dissent is often punished by Mr. Trump and his media loyalists.

“It’s a matter of public health. How can these shills face their followers after all the lies and deceit?” asked Michael Savage, the radio host and author who was one of Mr. Trump’s earliest supporters in conservative media and urged him to run for president in 2011.

“Are these mouthpieces without any social conscience?” added Mr. Savage, who called the words of Mr. Limbaugh and others “criminal negligence.”

Speaking on his Monday Fox News show, Tucker Carlson seemed to speak directly to skeptics like the president and Mr. Hannity, whose prime-time program follows his. “People you trust, people you probably voted for, have spent weeks minimizing what is clearly a very serious problem,” Mr. Carlson said, adding: “People you know will get sick, some may die. This is real.”

Mr. Trump pays close attention to Mr. Carlson’s show, and the two are in regular contact by phone. Earlier this year, the anchor was credited with helping persuade the president to dial back his hawkish approach on Iran — and Mr. Carlson’s words on the virus this week were interpreted as a message aimed at the White House.

There are also signs that political views affect how seriously someone takes the public health risk posed by the virus.

A Reuters poll last week found that roughly four in 10 Democrats believed the coronavirus was an imminent threat — but only two in 10 Republicans felt the same way. And Americans who approve of the way the president is handling his job are far more likely to believe that the government can stop a nationwide epidemic from occurring than those who disapprove, the poll said.

Seventy-nine percent of those who gave Mr. Trump high job approval ratings said they were very or somewhat confident in the government’s ability to prevent the outbreak from becoming much worse, compared with only 39 percent of those who disapprove of him, according to a CNN poll conducted last week.

At times, there has been a jarring split screen between the president’s nonchalance and the sober warnings of the nation’s top health officials, who have been more aggressive about warning certain vulnerable populations not to travel.

Asked on Wednesday at the White House what he had to say to those concerned he is not taking the situation seriously enough, Mr. Trump offered a tart, terse reply: “Fake news,” the president snapped, before dismissing reporters from the room.

The fallout from the president’s handling of the crisis might have been more easily dismissed as liberal, anti-Trump paranoia if not for an improbable twist of events. A person infected with the coronavirus attended one of the conservative world’s biggest annual gatherings last week, the Conservative Political Action Conference, leading some politicians like Senator Ted Cruz of Texas to voluntarily quarantine themselves.

Before this person’s status was made public — he was a V.I.P. attendee who purchased a $5,750 “gold” package that granted him access to backstage reception rooms where members of Congress and other high-profile figures mingled — conservatives at the conference were accusing the president’s enemies of inflating the seriousness of the outbreak.

The former White House chief of staff Mick Mulvaney, speaking from the conference stage last Friday, insisted falsely that the media had only just started paying attention to the coronavirus after the impeachment trial ended. And the reason, he added, was “they think this is going to be what brings down the president.”

But over the next few days, CPAC’s organizers were pelted with questions from fellow conservatives, some of whom said they shook the infected guest’s hand, about why they had been left in the dark.

Suddenly the “hoax,” as Mr. Hannity and others have called the response to the virus, hit home.

Raheem Kassam, a former Breitbart News editor, was one of several conservative activists who attended CPAC and expressed frustration about how the group handled the incident. Mr. Kassam, who said he felt sick over the weekend and on social media chronicled his frustrated attempts to obtain a coronavirus test, knew that he might have been exposed only after someone who works in the office of a member of Congress who was also exposed contacted him.

“I think there’s a grown-up conversation to be had about what happened,” Mr. Kassam said in an interview, adding that he did not believe that some conservatives wanted to have that conversation now. “Imagine being that sick, and then finding out why I might be that sick in a thirdhand way. I was angry. I was frustrated. I was scared,” he added.

But the president’s allies have attacked Mr. Kassam, accusing him of sowing panic when there are no other known cases to come out of the conference.

Matt Schlapp, president of CPAC, who has sequestered himself at home because he also shook the infected attendee’s hand, appeared on Fox News in recent days to malign the media for exaggerating the threat.

And though he acknowledged in a subsequent interview that he had no medical training, he has made claims about the coronavirus and its apparent lack of contagiousness.

“It’s actually hard to get,” he said on Fox News on Wednesday, speaking via Skype from his home, where he still has a few days left in his self-imposed quarantine.