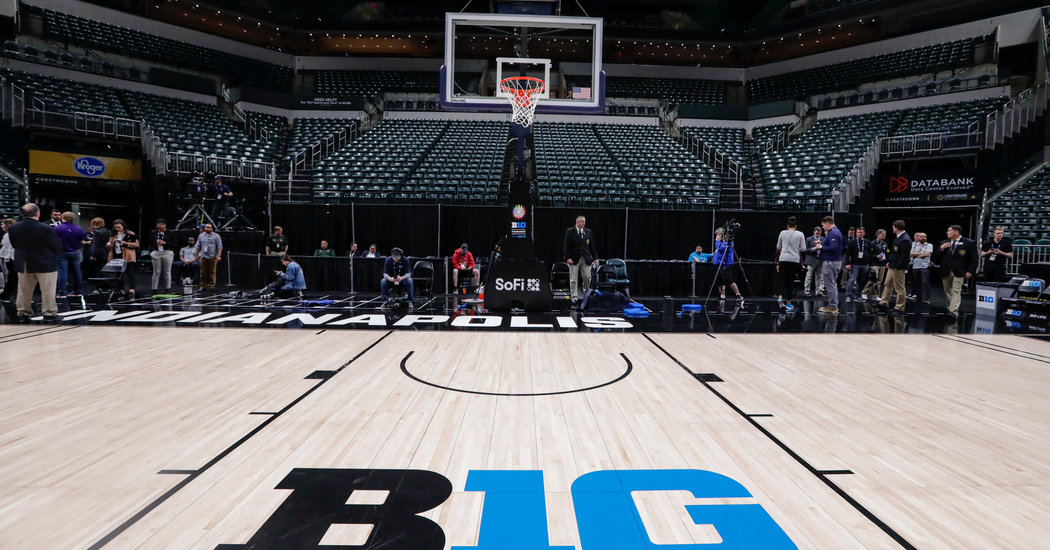 College basketball tournaments were widely canceled on Thursday amid a national reckoning with the coronavirus pandemic and swelling questions over whether the N.C.A.A. would proceed with its showcase men’s and women’s national tournaments later this month.

The most influential conferences in college sports — the Atlantic Coast, the Big Ten, the Big 12, the Pac-12 and the Southeastern — all said on Thursday that they would abandon their men’s basketball tournaments.

“We understand that this decision will be disappointing to our student-athletes and coaches who have been preparing all season to compete in this event, as well as viewers at home,” Greg Sankey, the SEC commissioner, said in a statement. “While this was not an easy decision, the health and well-being of our entire SEC community is of paramount importance.”

Other conferences, including the American Athletic and the Sun Belt, also canceled their tournaments, as the Ivy League did earlier in the week. Two universities with top men’s basketball teams, Duke and Kansas, said they would not play in any sports for the forseeable future.

Thursday’s torrent of disruptions escalated pressure for new action from the N.C.A.A., which announced Wednesday afternoon that its national tournaments, scheduled to begin next week, would be played without spectators.

In an interview on Wednesday evening, Mark Emmert, the president of the N.C.A.A., said officials were still crafting an array of contingency plans for the tournaments, including what would happen if a player contracted the illness. He declined to rule out further changes to the tournaments, including cancellation, but said he was “very confident that we’re at the right place.”

On Thursday, though, a haphazard, moment-by-moment feel seized the conference tournaments that help feed the national tournament fields.

In Indianapolis, just moments after the Michigan sophomore Brandon Johns Jr. led his teammates into an empty arena by jokingly acknowledging a crowd that was absent, players from Michigan and Rutgers were ushered off the floor. Not long after, the Big Ten announced that the balance of its tournament, which had begun on Wednesday, would be scratched.

“It became crystal clear to me that I would recommend to our chancellors and presidents and athletic directors that we would cancel the men’s basketball tournament,” Kevin Warren, the league’s commissioner, said later.

A similar sense of unease and chaos played out at other tournament sites.

In Nashville, Alabama and Tennessee had arrived for their game, and at midmorning in Greensboro, N.C., the commissioner of the A.C.C., John Swofford, said the conference intended to proceed with games.

“Right now, we are ready to tip the afternoon session,” Swofford said. “We want to provide an opportunity to continue to compete in this tournament for our players.”

The tournament was canceled less than two hours later.

Still, as the cancellations piled up across the country, the Big East steadfastly moved ahead its tournament before a smattering of fans in New York.

Teams warmed up to the sounds of bouncing balls echoing through the vast, largely empty Madison Square Garden as pep bands played “Build Me Up Buttercup” and “Come Sail Away.”

Despite its proximity to Manhattan, St. John’s had far fewer fans than Creighton — maybe 40 to 100 or so for the Bluejays. Even though the Red Storm were the underdog to top-seeded Creighton, its fans were better at social distancing — staying spaced apart from one another to minimize possible transmission of the virus.

The game, the first of four scheduled quarterfinals, tipped off a few minutes after noon, following a brief delay.

Officials ordered teams to their benches, as if awaiting further instruction. “Welcome to the Jungle” by Guns and Roses blared over the sound system.

After a few minutes, an official turned to St. John’s Coach Mike Anderson, flashed a thumbs-up and shrugged: Game on.

That lasted until halftime. Game over, and tournament, too.