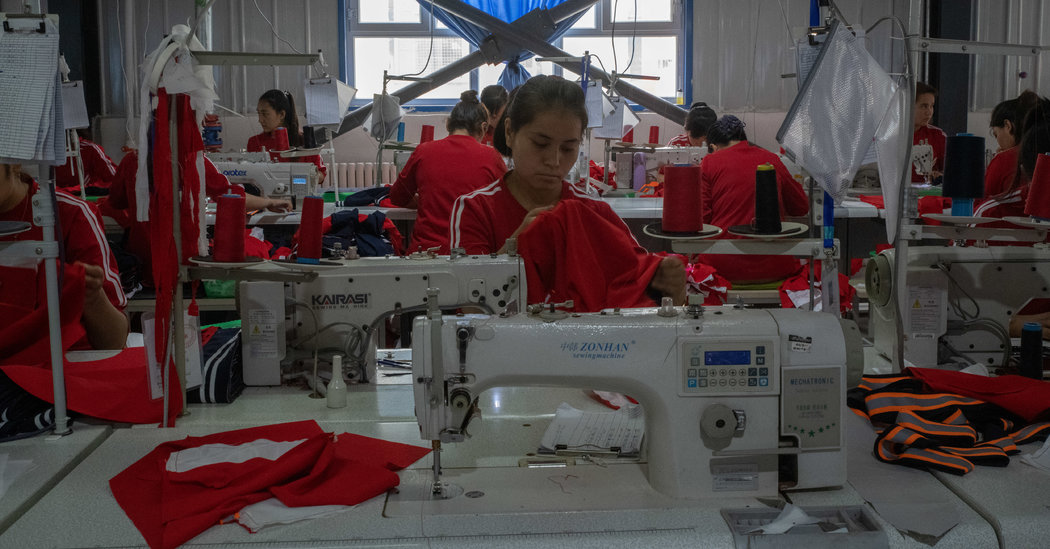 HONG KONG — American lawmakers unveiled legislation on Wednesday that, if passed, would tightly restrict imports to the United States from the Xinjiang region of western China, the toughest response yet to Beijing’s mass detention of minorities and coercive labor practices there.

With Xinjiang producing much of China’s cotton and textiles, the legislation could affect companies as diverse as Calvin Klein, Tommy Hilfiger, Nike and Patagonia, which are named in the draft bill.

While the bill’s prospects are uncertain, industry groups are already under pressure to police their Xinjiang imports. This week several released a statement calling worker rights and the treatment of minorities in Xinjiang an issue of “unprecedented” complexity, and asking the U.S. government to help assess it. Companies risk backlash in China if they are seen by the Chinese authorities as being critical of Xinjiang policies that Beijing has vocally defended.

The bill is co-sponsored by six Democrats and five Republicans in the House, and one Republican and two Democratic senators. It follows studies and news reports over the past year that have documented how millions of inhabitants of Xinjiang, especially the largely Muslim Uighur and Kazakh minorities, have been recruited into programs that assign them to work in factories, cotton farms, textile mills and menial jobs in cities.

“Global supply chains are increasingly at risk of being tainted with goods and products made with forced labor from” Xinjiang, said a report from Congressional-Executive Commission on China that accompanied the release of the proposed law. The United States, it said, should consider “a comprehensive import ban on all goods produced, wholly or in part” in the region.

China has called criticism of its policies in Xinjiang groundless smears of deradicalization efforts.

In Xinjiang, tens of thousands of Uighurs and other minorities are being sent to work in factories in other provinces of China, especially on the eastern seaboard where many manufacturers and exporters are based.

Many such government-led labor programs apply restrictions and recruitment targets that experts have said could amount to forced labor. The Australian Strategic Policy Institute, a think tank, reported in early March that more than 80,000 Uighurs had been transferred out of Xinjiang between 2017 and 2019 to work in factories across China that produced goods for dozens of global brands.

Labor transfers in Xinjiang have been disrupted by the coronavirus epidemic that froze industry across much of China, including the region. But news reports from Xinjiang have said that manufacturing, and the job assignment programs, are resuming.

If passed, the legislation could have a dramatic effect on importers and disrupt garment retailers’ global supply chains. Xinjiang produces about 80 percent of China’s cotton and the government has tried to encourage the growth of textile and garment manufacturing in the region, luring many of the country’s top conglomerates in the sector to set up factories and mills there.

American law already prohibits the import of goods manufactured using forced labor. But the proposed legislation for Xinjiang goes further. It says the security lockdown there makes it impossible to determine the true extent of coercion. So the legislation presumes that forced labor goes into products from the region.

If the bill is passed, only those goods from Xinjiang shown by “clear and convincing evidence” to not involve forced labor would be approved for import.

“Most shipments of textiles and apparel from China are likely to be considered at risk of being Xinjiang-linked,” said Amy K. Lehr, director of the Human Rights Initiative at the Center for Strategic and International Studies and co-author of a report on Xinjiang and supply chains.

But most companies and regulators cannot trace the precise origin of their entire supply chains, she added. “A significant number of Chinese apparel shipments might be seized under this legislation, and risk and uncertainty would hover over others,” Ms. Lehr said.

In Xinjiang, government-led labor programs transfer recruits — mostly rural Uighurs — to jobs as production-line workers, street cleaners, low-level guards and cotton pickers. Officials have said these policies help lift these heavily rural minorities out of poverty and put them in steady, supervised jobs that separate them from the temptations of potential religious extremism.

“Make people who are hard to employ renounce their selfish ideas,” said an order from a county labor bureau in Xinjiang, according to a Times investigation last year. “Turn around their ingrained lazy, lax, slow, sloppy, freewheeling, individualistic ways so they obey company rules.”

The labor transfer programs are a key part of the ruling Communist Party’s campaign to tighten its grip over Xinjiang. International criticism has focused on a network of indoctrination camps in the region, which the government has said are intended to turn Muslim minorities away from extremism and channel them into steady work.

Human rights organizations, Uighur groups abroad, former detainees and many foreign experts on Xinjiang have said that the million or more Uighurs, Kazakhs and other minorities sent to the camps are virtual prisoners, unable to leave or to appeal against their detention, and the plans to assign them to work in factories amount to forced labor. The Xinjiang government has said that growing numbers of camp inmates, whom it calls “students,” are leaving camps and being sent to jobs.

The legislation’s chances of passage are not yet clear. But Congress has shown broad bipartisan support for human rights legislation targeting China. Last year President Trump signed a law that authorizes sanctions of Hong Kong officials found to violate human rights, and requires an annual review of the city’s political status as a semiautonomous Chinese territory.

Both the House and Senate have also passed versions of the Uyghur Human Rights Policy Act, which would require the State Department and American intelligence agencies to report on rights violations in Xinjiang.

On Monday the Fair Labor Association, citing “credible reports of forced labor and other violations of fundamental human rights in the Xinjiang region,” asked its affiliates to investigate and identify alternative sources. The association, which is made up of representatives from universities, civil society organizations and companies, was founded two decades ago when American apparel companies were facing widespread criticism for sweatshop labor.

Some Fair Labor Association affiliates have ties to Xinjiang, including Esquel Group, a Hong Kong-based textile manufacturer that began operations in Xinjiang in the mid-1990s. It was one of several companies cited in the draft legislation, along with prominent Esquel customers including Calvin Klein, Tommy Hilfiger, Nike and Patagonia.

Esquel said it plans to keep its two ginning mills, which separate raw cotton fiber from seed parts, and three spinning mills in the region. “We absolutely do not use forced labor of any kind,” the company said.

On Tuesday several major American retail and clothing groups called on the U.S. government to work with the industry in assessing the extent of the problems in Xinjiang. The groups said it would help find “constructive solutions that target bad actors and protect the rights of workers and the integrity of global supply chains.”

The reported situation in Xinjiang “is of a scale, scope, and complexity that is unprecedented during the modern era of global supply chains,” it added. Nike and PVH, the parent company of Calvin Klein and Tommy Hilfiger, said they backed the industry groups’ statement.

Nike added that it does not directly source products from Xinjiang or have relationships with Esquel’s Xinjiang mills, but is continuing to examine “potential risks related to employment” of people from the region.

Separately, Patagonia said it was “horrified by what we’ve read in the media regarding a systemic, planned effort to force the country’s population of ethnic minorities into lives of factory work, and a program to change their basic beliefs.” The company said it was committed to ensuring “all workers are guaranteed their fundamental human rights.”