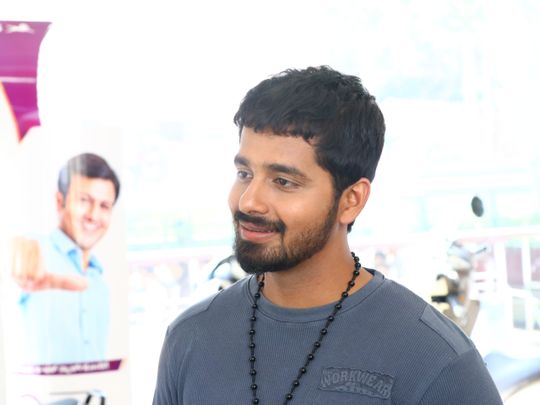 Tulu film stars Naveed D Padil and Aravind Bolar are headed to Dubai for a film premiere on March 13.

The actors, who star in the Tulu film ‘English’ will promote the comedy at a star-studded event in Reel Cinemas, Al Ghurair Centre.

The premise of the film asks the question: love is blind as they say, but can love make you go mute?

Abhi is in love with a young woman, Divya. What comes in the way of his love is his inability to express himself in English. How does Abhi express his love then? This forms the story directed by K Sooraj Shetty and produced by UAE residents, Harish Shergar and Sharmila Sherigar. This is the fourth film of the Sherigars, who earlier produced three hit Kannada films ‘March 22’, ‘Hottegagi Genu Battegagi’ and ‘Yaana.’

The lead actors of ‘English’ are Pruthvi Ambar and Navya Poojari, with Padil and Bolar in pivotal roles.

Look out for veteran actor Anant Nag making his foray into Tulu cinema in an interesting role.

Shetty said that ‘English’ is humour laden and a fun watch.

‘English’ is expected to go on general release in the UAE on March 20.