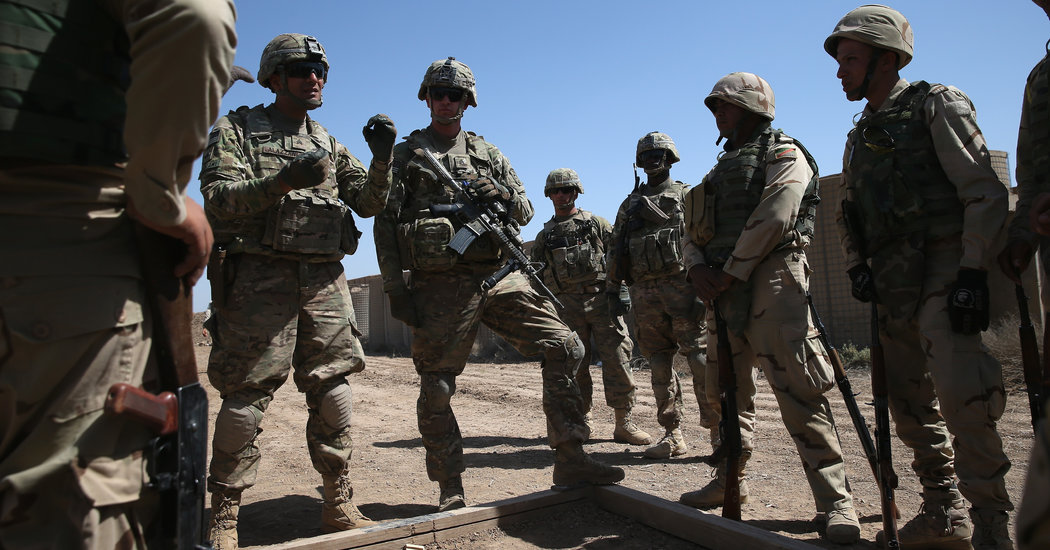 BAGHDAD — A volley of 30 rockets was fired at a sprawling military base north of Baghdad Wednesday evening, killing two American service members and a British citizen, according to a United States official and an Iraqi military officer, both in Iraq.

Within hours, the American-led military coalition in Iraq responded with airstrikes on camps used by Iranian-backed militias near Abu Kamal in Syria, just across the border from Qaim, Iraq. Two Iraqi militias with ties to Iran — Hezbollah and Nujaba — operate there, according to an Iraqi military official, who said there were heavy bombings there on Wednesday.

The two Americans were active-duty troops with the Army and Air Force, an American military official said. The official said that 12 coalition troops and contractors of various nationalities were wounded.

The White House and Pentagon had no immediate comment on the rocket attacks.

A senior Trump administration official said that senior national security aides were closely following the situation but declined to comment further until a more detailed assessment of what happened and who was responsible was available.

“An investigation is underway, it would be inappropriate to comment further at this time,” the spokesman said.

The American military official, who spoke on condition of anonymity because the attack was under investigation, said that 30 107-mm Katyusha rockets were fired at the base from improvised truck launchers. Of those, 18 landed on Camp Taji.

The names of the victims were not released pending notification of their families.

A similar Katyusha rocket attack in December, which killed an American contractor and which the Americans attributed to Iraqi Hezbollah, set off a spiral of attacks that nearly led to war between the United States and Iran.

After that rocket attack, the Americans responded by bombing a Hezbollah headquarters in western Iraq, which led to a siege of the American Embassy in Baghdad and then an American drone attack that killed the leader of Iran’s elite Quds force, Maj. Gen. Qassim Suleimani.

The attacks ended more than two weeks later after Iran launched 16 cruise missiles at bases in Iraq that house American forces. No one was killed by the Iranian missile attacks and tensions had appeared to subside.

About 10 days ago, though, the leader of Iraqi Hezbollah renewed threats against American installations in Iraq and against any Iraqis who work with the Americans, noting that while the pro-Iranian armed groups had been restrained, that would end in mid-March.

The situation now, however, is considerably more complicated.

If anything, Iraq is even more fragile, with the fight against the coronavirus taking a heavy toll on the country at a time that its oil industry, its main source of revenue, is under extraordinary stress from plummeting oil prices.