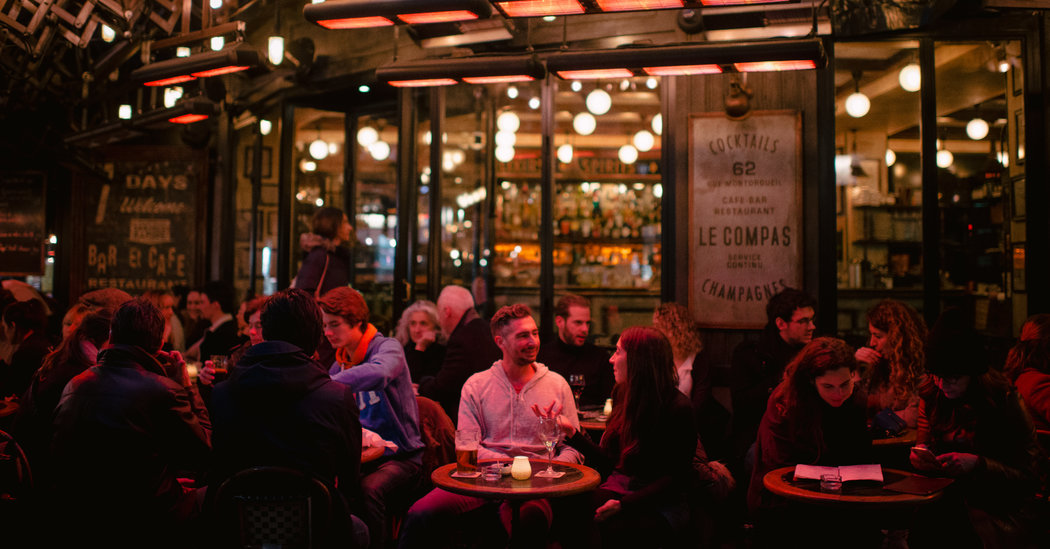 PARIS — It was a chilly winter afternoon on Rue Montorgueil, a cobbled pedestrianized street in central Paris lined with dozens of outdoor cafe terraces. The temperature barely exceeded 50 degrees Fahrenheit, and the sun was hiding behind large fluffy clouds.

Yet despite the crisp weather, Pierre-Louis Le Tolguenec was sipping his beer on a terrace, wearing a T-shirt and no jacket as if it were summer.

The reason for this paradox hung over his head: orange lamps throwing out heat, creating a microclimate.

“It’s a French cultural habit to be on a terrace in summer as well as in winter,” said Mr. Le Tolguenec, a 25-year-old engineer — although he acknowledged, “in this case it’s a little bit too much.”

Heat lamps have flooded France’s outdoor cafe terraces for over a decade, making sitting outside whatever the weather not only possible, but comfortable. But the phenomenon could be nearing an end as calls to ban heated terraces have gained traction in the run-up to France’s municipal elections this Sunday, against a backdrop of growing environmental concerns.

On Jan. 1, Rennes became the first big city in France to ban outdoor heaters from all cafes and restaurants, prompting others like Bordeaux and Lille to consider similar legislation.

The most visible place the debate is playing out is in Paris, where outdoor terraces not only account for a significant portion of cafe and restaurant revenues, but also are a symbol of what is known as “the French art of living.”

“Removing the heaters would result in removing the Parisian terraces,” said Sylvie Da Costa, the manager of Cafe du Centre on Rue Montorgueil. “Parisians like to sit on a terrace and watch people go by while staying warm.”

The push comes at a delicate time for the city’s businesses. Monthslong transit strikes kept many Parisians off the street last year, and further disruption looms as the coronavirus outbreak increasingly hampers travel around the globe.

“Given the economic situation we’re in right now, I don’t think it is the time to introduce a new constraint,” said Marcel Benezet, a representative of the GNI-HCR, the country’s main union for cafes, hotels and restaurants. He said terraces accounted for 30 percent of revenue for the city’s cafes and restaurants.

“The first thing that tourists do when they arrive in Paris is to order a drink on a terrace,” he said.

The city’s renowned terrace culture owes much to its 17,000 cafe terraces. They line sprawling avenues and stand on corners of tiny streets like “sidewalk academies where one learns Bohemian life, scorn for the middle classes, humor and how to hold a glass,” the French poet Léon-Paul Fargue wrote in 1939.

But Mr. Fargue never had a chance to experience terrace heaters.

Their prevalence dates back to 2008, when a ban on smoking in enclosed public places spurred restaurants and cafes to install heat lamps on their terraces to provide smokers with some comfort.

In a city that last year experienced record-breaking temperatures of over 100 degrees Fahrenheit, however, the terrace culture seems at odds with increasing concerns about climate change. Nor is the ban the only pro-environment move being considered. Measures in several French cities have included plans to limit cars in Paris and the disappearance of skating rinks whose carbon footprint had elicited concern.

About 70 percent of cafe terraces in Paris have heating devices, according to a poll released in January by the GNI-HCR.

Cafe owners argue that since most of the heaters run on electricity, which in France largely comes from nuclear energy, they have low carbon footprints. But environmental activists point to the impact of nuclear waste and say the heaters are still a significant waste of energy.

Thierry Salomon, a French energy engineer, estimated in an article published on LinkedIn in January that an 800-square-foot terrace heated by 10 electric heaters from mid-November to mid-March would amount to nine times an average household’s electricity consumption in a year, excluding heating and hot water.

Although that square footage is larger than the average Paris cafe terrace, according to urban planning authorities, others agree with the argument in principle.

“We laugh at Qatar, which wants to air-condition soccer stadiums, but we’ve been heating the air in winter for 10 years,” said Jacques Boutault, the Green party mayor of Paris’s 2nd arrondissement, who has been crusading against heated terraces for over a decade.

“It’s typical of a luxury that we can no longer afford,” he said.

Despite unsuccessful attempts to ban them in 2008 and 2009, and a Paris court ruling that overturned a ban on gas heaters for cafe terraces in 2013, Mr. Boutault renewed his proposal to get rid of heated terraces in Paris last December.

The City Council subsequently rejected his proposal for the third time, but the idea resonated with several cafe-goers on the terraces of Rue Montorgueil on a recent afternoon.

“It’s like toasters!” said Sophie Lombard, a retired psychiatrist, as she pointed to the heat lamp above her head. “It’s an insane amount of energy consumption, and it’s very unpleasant.”

Sitting a few steps away, Valentin Thierry, a 24-year-old actor, had asked that the heat lamp over his head be turned off because it was too hot. “Honestly, it’s all right — with a small jacket we can survive,” he said.

The proposal to ban heated terraces, once considered a Green fantasy, has also become part of the public debate in the run-up to the city’s municipal elections.

The Greens and Cédric Villani, a former member of President Emmanuel Macron’s party, said they were in favor of the ban. Mayor Anne Hidalgo, who is up for re-election and has championed green policies, said she would consult cafe owners in the coming months.

Several cafe owners in Rennes said in telephone interviews that they had not experienced a drop in revenue since the ban was introduced at the start of this year. But in Paris the debate also touches on the viability of elements of French culture in the face of growing environmental concerns.

“We’re not going to ban all heated terraces, because it’s the soul of Paris to be at a cafe terrace,” Agnès Buzyn, Mr. Macron’s candidate in Paris, told a French radio station.

Mr. Boutault, the Green mayor, countered that this had not always been the case.

“Back in the day,” he said, “people would go inside when they were cold, and it didn’t seem absurd to them.”