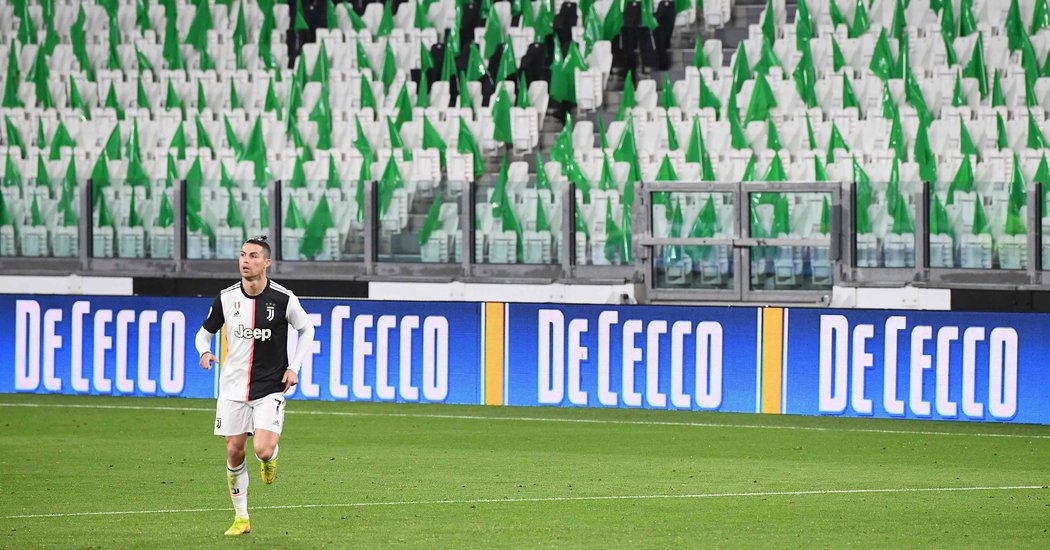 The coronavirus toll has risen to 100,000 infections and 4,000 deaths. With governments imposing lockdowns and travel and border restrictions, and a fear from some that the worse is yet to come, sports events worldwide continued to be postponed, canceled or played without spectators.

San Jose and San Francisco have banned gatherings of more than 1,000 people, leaving the San Jose Sharks of the N.H.L. and the Golden State Warriors of the N.B.A. in difficult situations. The Warriors announced they would play Thursday night’s game against the Nets in an empty arena. The Sharks said they were considering their options, including postponing home games, moving them or playing them without fans.

For the most part in the United States, games were going on as scheduled, although reporters were barred from locker rooms. That could change, especially if the virus spreads more rapidly.

The Italian Olympic Committee has taken the biggest step, stopping domestic sporting events throughout the country until April 3, a ruling that affects soccer games and cycling races. As a result, Italy’s soccer federation said the league season might not finish. The ban will not apply to international events like the Champions League.

Here’s the latest as of Wednesday:

The Ivy League became the first N.C.A.A. Division I conference to cancel its basketball tournaments, which had been scheduled to be played at Harvard this weekend. The Mid-American and Big West conference tournaments will be held without fans. The top European basketball competition, Euroleague, suspended all games in Italy until April 11 after several teams expressed a reluctance to play there.

The 16-team team College Basketball Invitational, created in 2007, will not be played this year because of the outbreak. It is the second postseason basketball tournament, after the Ivy League’s, to be canceled outright.

The ban on gatherings in San Francisco currently affects just one Warriors game, as the team will leave for a five-game road trip after Thursday’s game. No official announcement has been made as to what will happen if the ban is extended.

The Ivy League canceled all spring practices and competition for the remainder of the academic year. Its member schools will decide whether winter teams and student-athletes who have qualified for postseason play will participate.

The Indian Wells tennis tournament in Southern California, one of the most important on the calendar, will not be held this month.

The tournament, formally known as the BNP Paribas Open, features the best men’s and women’s players in the world. Organizers noted that there was a local case of the virus in their statement canceling the event. Many of the professionals were already in Indian Wells preparing for the tournament. While organizers spoke of rescheduling the event, it will be hard to find a spot on the crowded tennis calendar.

The Fed Cup finals, scheduled for Budapest in April, have been postponed.

Games across Europe and other parts of the world are being played without spectators to help prevent the spread of the virus.

The Manchester City-Arsenal match on Wednesday became the first Premier League game postponed. Arsenal had played Olympiakos two weeks ago and some players and staff members had contact with Evangelos Marinakis, the Greek owner of Olympiakos, who has tested positive for the virus.

France, which has hundreds of coronavirus cases, will bar spectators at all games in the top two divisions until April 15. A Champions League match in Paris on Wednesday between Paris St.-Germain and Borussia Dortmund will be played without spectators. The League Cup final between P.S.G. and Lyon has been postponed indefinitely from April 4.

Barcelona’s Champions League game against Napoli on March 18 will also be played without fans, as will the Valencia-Atalanta game on Tuesday, and the Bayern Munich-Chelsea game on March 18.

Spain and Portugal will play league games without fans for at least two weeks. All weekend games in the Bundesliga in Germany will be played without fans, a first for the league.

In Japan, J League games have been postponed for a week, and a longer delay is possible. In China, the Super League schedule has not yet begun, with no date for a return set, as much of the country is under virtual lockdown.

The Spanish team Getafe said it would not go to Italy for a Europa League game Thursday. The game was subsequently postponed. Going in the other direction, Roma will not travel to Sevilla for its game because its plane was not authorized to land in Spain.

All World Cup qualifying games in Asia were postponed until the fall. The Slovakia-Ireland playoff for Euro 2020 will be played without fans.

The flame lighting ceremony in Greece on Thursday will be held without spectators. Olympic officials continue to maintain that the Summer Games will proceed as scheduled in Tokyo in July and August.

Yoshiro Mori, the president of the Tokyo Olympic organizing committee, dismissed comments by an executive board member who said the Games should be delayed a year. “He certainly said an outlandish thing,” Mori said.

The France-Ireland game set for this weekend in Paris has been postponed, the third Six Nations match to be put on hold. For now, the last remaining match for the weekend, Wales-Scotland, will be played as scheduled.

The Seattle Mariners said they were working on alternative plans for their six home games scheduled for March, in accordance with a ban, announced Wednesday, on large-group events in the area through at least the end of March.