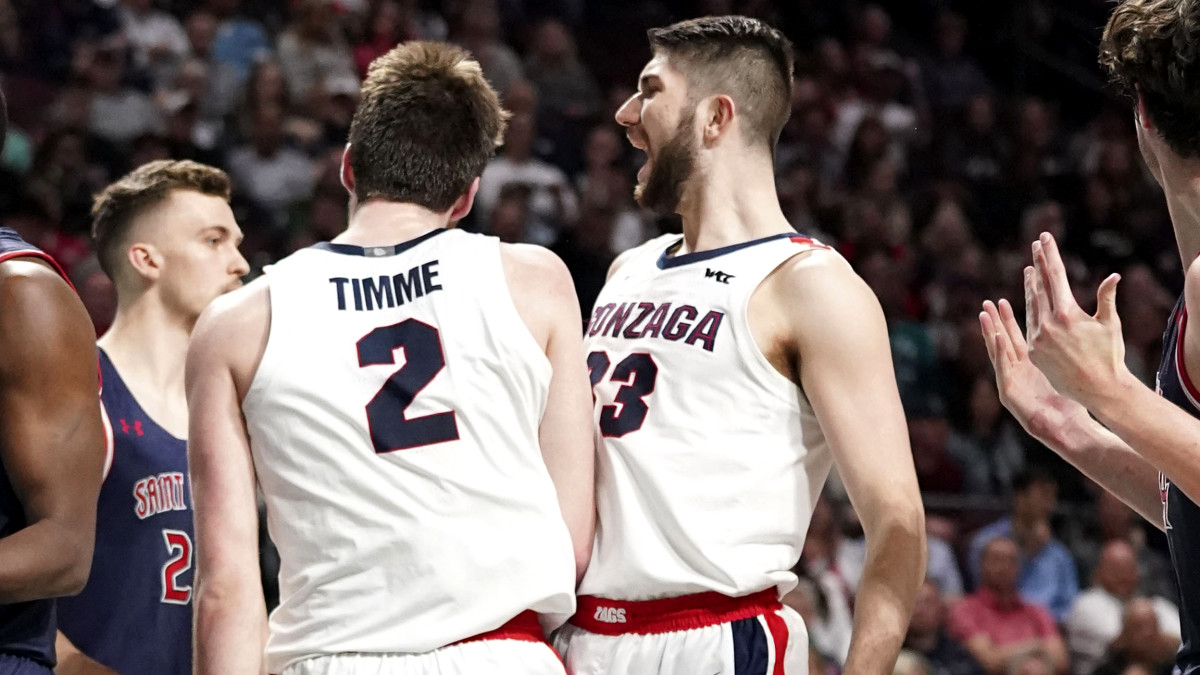 The top-seeded Zags (31-2) bounced back from a middling performance in the semifinals to win their eighth WCC tournament title in 10 years.

Playing in its 23rd straight WCC title game, Gonzaga raced away from the Gaels in a dominating second half – and all but guaranteeing itself a No. 1 seed in the NCAA Tournament.

Petrusev finished with 10 points and 14 rebounds to help the Zags outscore Saint Mary’s 48-22 in the paint. Joel Ayayi also had 17 points.

Saint Mary’s (26-8) upset Gonzaga in last year’s title game to earn the WCC’s automatic NCAA Tournament bid and kept pace with the Zags in an entertaining first half this time.

Jordan Ford and Malik Fitts combined to score Saint Mary’s first 34 points to keep the Gaels close, but Gonzaga tightened up defensively in the second half to pull away.

Ford finished with 27 points and Fitts 17 for the Gaels, who should be in decent shape to make the NCAA Tournament despite the loss.

The Zags and Gaels eked their way into their 11th title-game meeting.

Gonzaga struggled putting away San Francisco in an 81-77 and Saint Mary’s advanced in the second semifinal with a 51-50 victory over No. 14 BYU on Ford’s last-second shot.

The Zags won the two regular-season meetings between the rivals by a combined 40 points on their way to claiming an eighth-straight WCC regular-season title.

Petrusev did most of the damage in the final game of the regular season, scoring 27 points.

It was Timme’s time in Las Vegas. The 6-foot-10 freshman repeatedly got deep post position against the Gaels and took advantage, hitting 7 of 8 shots for 15 points in the first half.

Ford and Fitts carried nearly all the load for Saint Mary’s, combining to score but seven of the Gaels’ first-half points.

The Bulldogs locked in on Ford, Fitts and the rest of the Gaels to start the second half, forcing them to miss six of their first eight shots while building a 56-46 lead.

A short run later in the half pushed Gonzaga’s lead to 72-55 and the Zags onto the stage to accept another WCC tournament trophy.

Saint Mary’s was unable to conjure up the same magic it had last year, leaving the Gaels to rely on an at-large NCAA Tournament bid.

Gonzaga bounced back from a shaky semifinal with a strong all-around performance to likely lock up a No. 1 seed in the NCAA Tournament.

Saint Mary’s awaits word if it will be selected for the NCAA Tournament.

Gonzaga will play in the NCAA Tournament,an expected No. 1 seed.